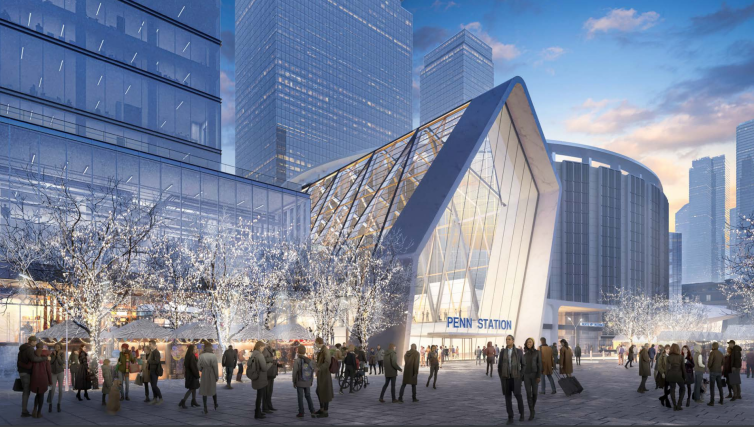 Gov. Kathy Hochul unveiled a scaled-down version of former Gov. Andrew Cuomo’s plan to renovate and expand Pennsylvania Station on Wednesday afternoon, shrinking the size of adjacent developments from Cuomo’s pitch and moving away from his office- and retail-focused proposal.

Hochul has opted to move forward with the Metropolitan Transportation Authority’s plan to transform the 1960s train station into a single-floor train hall. The renovation would involve removing one story above the current main floor of Penn Station, allowing the MTA and Amtrak to open up skylights in the ceiling and bring sunlight into what is now a lightless, subterranean space.

“More people use Penn than all three airports combined,” the governor said during a press conference in Manhattan. “I believe our post-COVID recovery hinges on what we do next with infrastructure and economic development.”

She argued that the state should move forward with the renovation of Penn Station without waiting for federal funding for the Gateway Tunnel or expanding Penn Station to the south, which would involve acquiring two blocks in order to add nine more tracks to the station’s existing 21.

“Yes, it’s good to [expand Penn and build the Gateway Tunnel], but the existing Penn Station serves New Yorkers,” Hochul said. “Sixty percent of the people who use Penn Station are New Yorkers, they’re taxpayers. They deserve a transformative experience as well.”

She also wanted to reduce the footprint of the 10-building development proposed to fund the renovation and expansion of Penn. She pledged to slash about 1.4 million square feet from the planned 20 million-square-foot development proposal, and Hochul also wants to “lower the building heights,” but did not specify how tall the potential new towers would be.

“It does not have to be the scale it is right now, we can scale it down and generate the revenue we need while benefiting the neighborhood,” she said.

The development would now include 1,800 apartments — 540 of which would be affordable — which represents a departure from Cuomo’s office- and retail-focused plan.

Hochul also proposed a new concourse connecting Penn Station and Herald Square, which will likely be a reactivation of the currently disused Gimbels passageway beneath the soon-to-be-demolished Hotel Pennsylvania.

The governor, too, emphasized plans to pedestrianize the surrounding streets and add eight acres of public space, which the local community board and elected officials support, along with Vornado Realty Trust, which owns much of the property around Penn Station. On  West 33rd Street between Avenue of the Americas and Ninth Avenue, the city would widen the sidewalks, add green space and bike parking.

The overhaul of Penn Station is expected to cost roughly $7 billion, The New York Times reported. The costs will be split the same way as they are for the Gateway Tunnel itself: half the funding will be provided by the federal government, and New York and New Jersey will each fund 25 percent of the project. New York plans to fund its part of the renovation by collecting revenue — likely property and sales taxes — from the owners of the properties around Penn Station.

“Why is the biggest transit hub in the Western Hemisphere named for a neighboring state?” Hochul said. “I think it should be named after a famous New Yorker.”