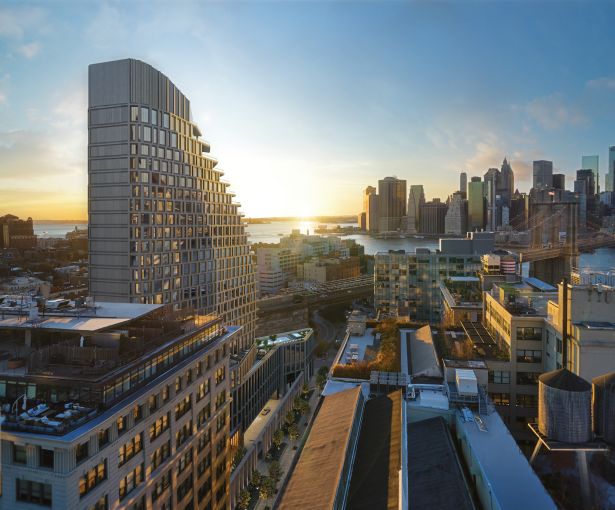 G4 Capital Partners provided the loan for the 76-unit luxury project, in a transaction arranged by Galaxy Capital’s Henry Bodek.

The striking, 33-story asset is designed by Hill West Architects and sits in the heart of Dumbo, offering views of the harbor and Lower Manhattan skyline. When completed, it will feature more than 38,000 square feet of top-tier indoor and outdoor amenities, including a sauna and spa, a yoga room, indoor and outdoor swimming pools, tennis courts, and billiards and bowling lounges.

Fortis acquired the development site in 2018 for roughly $62 million. The new financing retires $163 million in construction financing on the property that was provided by Madison Realty Capital in October 2020.

With much of the project’s curved facade now complete, construction is expected to wrap in 2022.

“This was a situation where we had the construction financing piece already in place during COVID, and now we’re out of the ground with this beautiful project,” Fortis CEO Jonathan Landau told CO. “It was an opportune time to refinance, while also reducing financing costs. We closed a compelling deal with G4, and we’re thrilled with the execution. We look forward to a long history with G4 and Galaxy.”

In September, The Real Deal reported that the coveted property’s units are the most expensive in Brooklyn, with asking prices upwards of $3,000 per square foot for its two penthouse units. Karen Heyman and Casey Heyman of The Heyman Team at Sotheby’s International Realty and Fredrik Eklund and John Gomes of The Eklund-Gomes Team at Douglas Elliman are handling sales.

“We are thrilled to be part of this groundbreaking project in Dumbo which we believe will set records for condo sales,” Robyn Sorid, co-founder of G4, said. “What was most compelling for us was the project’s unique placement in the market; both geographically speaking and within its one-of-a-kind residential and commercial offerings. From its ceiling heights to its amenities to the breathtaking views over Lower Manhattan, it’s easily distinguished from the competitive set.”

Regarding Olympia Dumbo’s unique selling points, Landau noted its “superior architectural elements, best-in-class amenities and views over the Manhattan skyline,” as a few that are now setting a tone for the rest of Dumbo. Sales launched in October and demand for the asset’s units is already red-hot, Landau said, primarily from domestic buyers so far as the world emerges from the constraints of the COVID-19 pandemic.

“We had a great amount of lender interest in the financing, but we’re thrilled with G4’s execution in the deal,” Bodek said.