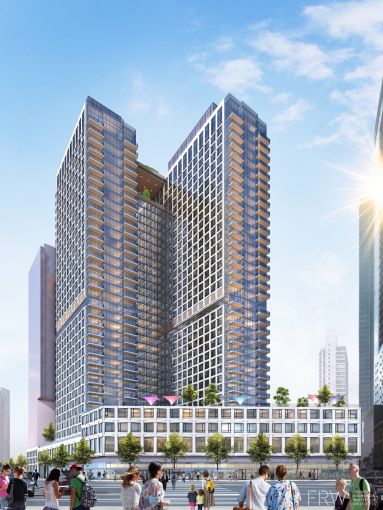 A rendering of the development at 625 Fulton Street. Photo: Fisher Rasmussen Whitefield Architects

Madison Realty Capital (MRC) just provided $450 million in construction debt to a Rabsky Group-led venture to finish the ground-up build out of a multifamily, mixed-use tower at 625 Fulton Street in Downtown Brooklyn, Commercial Observer has learned.

The deal closed Friday afternoon and was negotiated by Galaxy Capital’s Henry Bodek.

The funds will go towards the build out of a 35-story, 1,098-unit, mixed-use multifamily and retail asset with two connected residential towers that sit above a five-story base at 625 and 635 Fulton Street, according to information from MRC.

“Downtown Brooklyn is an ever-expanding neighborhood, and new multifamily housing options, particularly of this caliber, will be quickly absorbed,” MRC co-founder and Managing Principal Josh Zegen said. “We are glad to support a property under development that will offer significant affordable housing options.”

A spokesperson for Galaxy highlighted MRC’s certainty and speed of execution in the deal, adding that the lender’s “forward-thinking approach and its ability to bring creativity and provide post-closing flexibility to clients on a transaction of this size is truly unique.”

There will be 342 studios, 492 one-bedroom units and 264 two-bedroom residences, 30 percent of which will be designated as affordable through the 421a Affordable Housing New York program, while a number of others will be affordable units for low-income tenants through New York’s Inclusionary Housing Program. The project will also include nearly 26,000 square feet of retail space along Fulton Street, as well as 250 parking spaces and 150 storage units, according to MRC.

Excavation work on the development — designed by Fischer Rasmussen Whitefield Architects — began in May. Plans reported that month called for 1.8 million square feet of space, most of which was office (about 740,000 square feet), 902 apartment units, retail space and an elementary school, brought together by a public plaza area.

Updates on the project have been relatively quiet since the early spring of 2019, when CO first reported that Rabsky had been granted a six-month extension on about $100 million worth of debt on the two adjacent development sites that would house the project. Rabsky owns the two sites alongside Joel Gluck’s Spencer Equity.

Rabsky bought the two lots on which the project will be erected for $158 million from Forest City Realty Trust in early 2016, helped by financing from Bank Leumi, Axos Bank and the State Bank of Texas. Bank Leumi’s $80 million senior note on 625 Fulton Street and the State Bank of Texas’ $20 million mezzanine loan were deemed past due in early 2019, leading to a six-month extension of both debt pieces.

Officials at Rabsky Group could not immediately be reached.