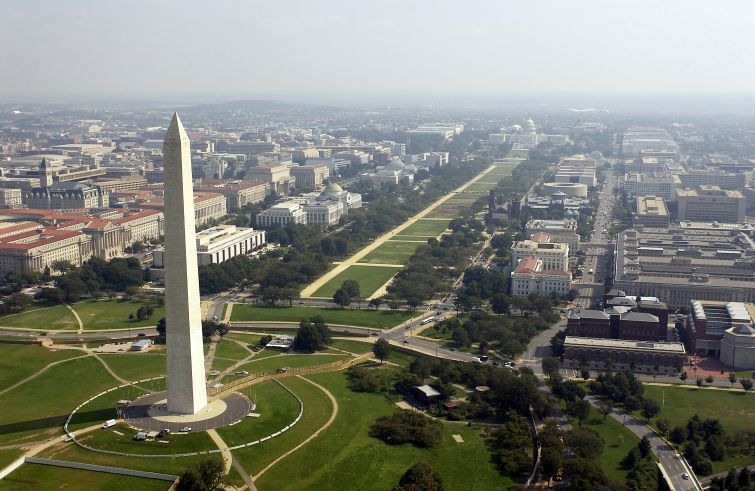 An aerial view of downtown Washington, D.C., the National Mall and the Washington Monument. Photo: Andy Dunaway/USAF via Getty Images

The capital market in the nation’s capital is slowly but steadily improving, industry experts agreed at Commercial Observer’s fifth annual fall D.C. “Financing CRE Forum: Adjusting Strategies as We Enter the Next Iteration of Dealmaking” on Nov. 9. Real estate leaders, from lenders to borrowers, dove into the ever-trending demand for multifamily leases, the problems tied into the affordable housing crisis, and the impending threat of inflation on future deals.

Moderated by CO finance reporter Andrew Coen, the forum began with the panel, “Getting Back to Business: Will Q4 2021 Usher in a New Wave of Trends & Opportunities?” Tamaron Houston, partner of real estate finance at law firm Seyfarth Shaw, led the conversation between Frankie T. Jones Jr., a vice president and managing director at Lincoln Financial Group, and Kent Marquis, a principal of real estate development and investment firm Stonebridge.

The conversation began by addressing the elephant in the room: the future of offices. A hot topic in the industry, with varying outlooks on return-to-office timelines and hybrid models, the panelists agreed that it will take more than just an office to get tenants back in their buildings.

“Spec is just a bad word today for office,” Marquis said, though he doesn’t believe people will shy away from leasing new offices. Rather, he believes the asset’s future boils down to modernization, as tenants won’t tolerate outdated amenities. Newly built spaces with specific safety features — from air that’s recycled at a rapid rate to touchless technology that lets you control the elevator from your phone — will drive the migration back to the office.

“When I see my tenant’s wish list, it has definitely expanded from what I saw two years ago,” Houston agreed.

While the timeline of the office market bounce-back remains uncertain, multifamily leases are a definitive bet across the country. A favored asset class for both lenders and borrowers, multifamily continues to ride the pandemic’s tailwinds, with demand accelerating at a consistent pace. Multifamily and logistics comprised 93 percent of Lincoln Financial Group’s new production, compared to 75 percent in those spheres pre-pandemic, Jones said. He predicted that the trend won’t taper off for a while, as multifamily leases offer flexibility to tenants who aren’t yet ready to purchase a home.

Meanwhile, retail and hospitality are slated to improve, despite the impact of e-commerce. While the boom in e-commerce hit retail even prior to the pandemic, the last year has emphasized the importance of connectivity, and certain neighborhood retail centers have been sheltered from 2020’s harm.

“As great as e-commerce might be, you still can’t get your hair cut by Amazon,” Jones said, adding that the shift to work-from-home has created a greater inclination for errands that allow people to get out of the house and engage in any form of social interaction. Neighborhood centers are natural destinations, and local retail has either thrived or died from the pandemic, as retailers have either had to expand or shut down, depending on the location.

Crandall pointed to re-purposed malls, as well as re-priced street-level urban retail, as examples of shifts within the asset that have made retail’s recovery difficult to gauge holistically. Rather, retail’s success depends on an array of factors, like the population density in a given neighborhood, as well as return-to-work timelines that either drive employees to office-heavy neighborhoods — and their retailers — or keep them within their local community and its own offerings.

“Retail is so location- and property-specific,” Crandall said.

As for D.C. specifically, asset classes across the board are predicted to improve throughout 2021 and into the new year. The nation’s capital has been gradually diversifying from an entirely government city into a hub for employment of all types. And Amazon’s newest headquarters going up in Northern Virginia is expected to drive demand further.

“D.C. continues to be a relatively affordable market compared to some of the other gateway markets,” said Cotter, whose JBG SMITH is developing that Amazon HQ.

This relative affordability primes D.C. for new opportunities in commercial real estate, and the city looks toward reviving under-served neighborhoods and communities that have been overlooked by the industry.

“What’s great about D.C. is that it is slow and steady,” said Scott Meyer, chief financial officer at investment and development firm PTM Partners. He spoke on the third panel, entitled “Where Are the Opportunities to Be Found?” alongside Bo Menkiti, founder and CEO of real estate company Menkiti Group, and Ryan Riel, executive vice president and chief real estate lending officer at EagleBank. Coen moderated the discussion.

Meyer noted that the unemployment rate in D.C. has increased, but relative to the rest of America, D.C. has fared well. The nation’s capital is one of the top five tech economies in the country, and is therefore well-equipped to not only provide new jobs but use municipal leasing as a framework for neighborhood activity.

D.C. leadership is focused on driving economic activity east of the Potomac River, said Menkiti, who noted that the relocation of offices eastward will be key for changes in neighborhood activity, and will help communities advance their own ideas for the spaces in which they reside.

He, along with the other panelists, pointed to opportunity zones, which incentivize developers and investors to build in underserved areas. To bring such projects to fruition, collaboration is key, and local politicians need to work in conjunction with neighborhood members, as well as debt groups, equity groups and developers. Such coordination has led D.C. over the past 20 years, Riel said, and will continue to spur the area’s growth.

Still, the working class remains an area of concern, as its members have been devastated by the pandemic — but since forgotten by the commercial real estate industry. D.C. housing tends to cater to either the top or the bottom percentages, marketing either expensive leases to people who can afford to pay for them or subsidizing houses for those most in need. While it’s certainly crucial to provide more affordable housing to the bottom 30 percent, workforce housing has been caught somewhere in the middle. This gap has led to a displacement and has become problematic not only from a moral standpoint but from a business perspective.

“Quite frankly, I think the District and our region are in danger of losing a significant level of competitiveness for employers unless we figure out how to solve the housing problem for working people, not just those who are most in need,” Menkiti said.

The advancement of opportunity zones, as well as President Joe Biden’s highly anticipated infrastructure bill, will hopefully begin to address this disparity, and continue to develop D.C. with neighborhoods — and their communities — at the forefront.

Until then, the market remains ripe for growth.