For DC's Building of the Month, we look at JBG SMITH's West Half development 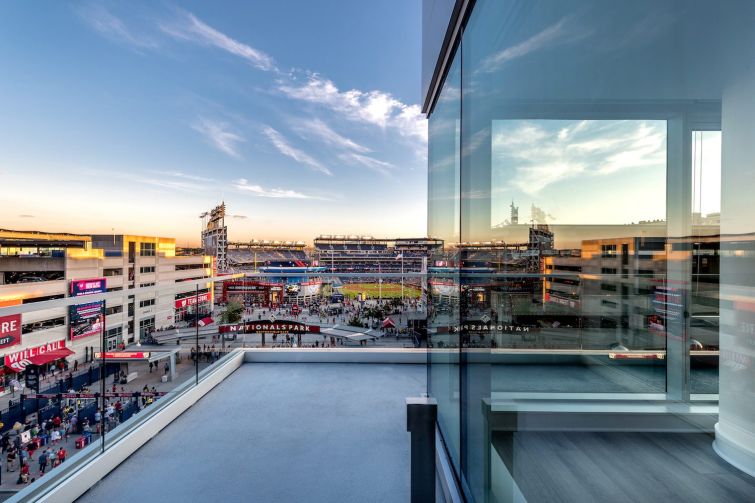 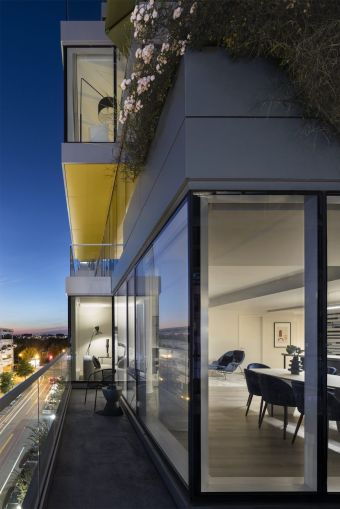 An outside view. Photo: Scott Frances 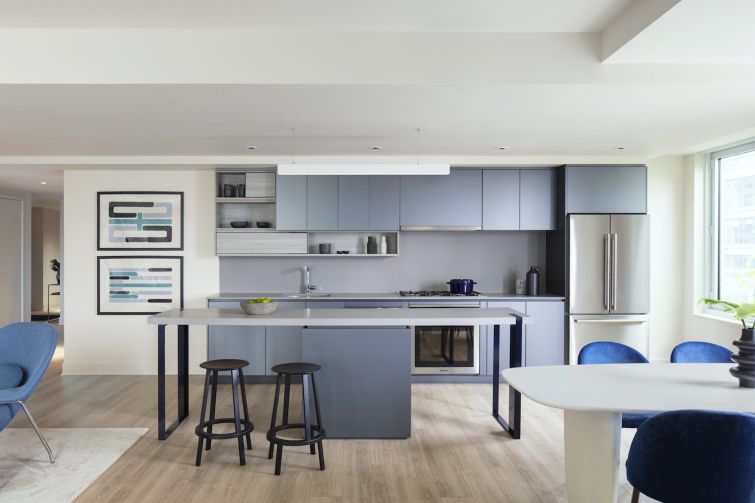 Inside a kitchen at West Half. Photo: Scott Frances 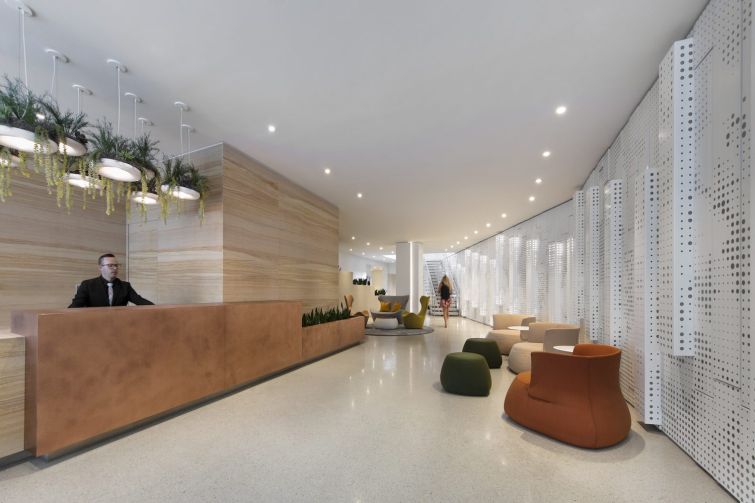 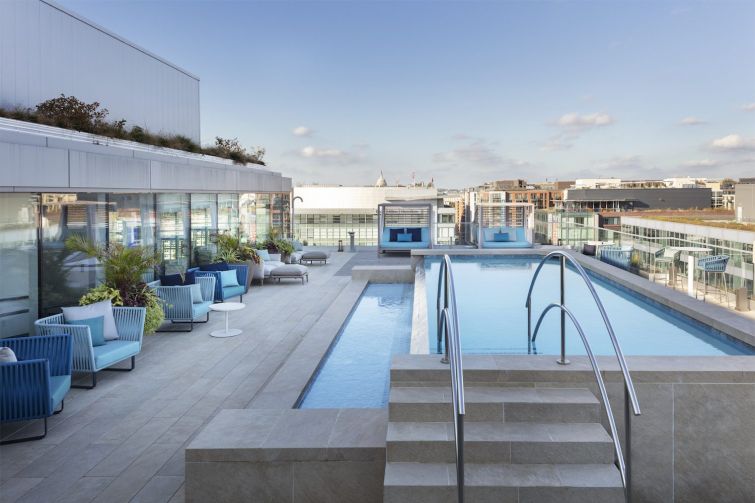 The pool at West Half. Photo: Scott Frances 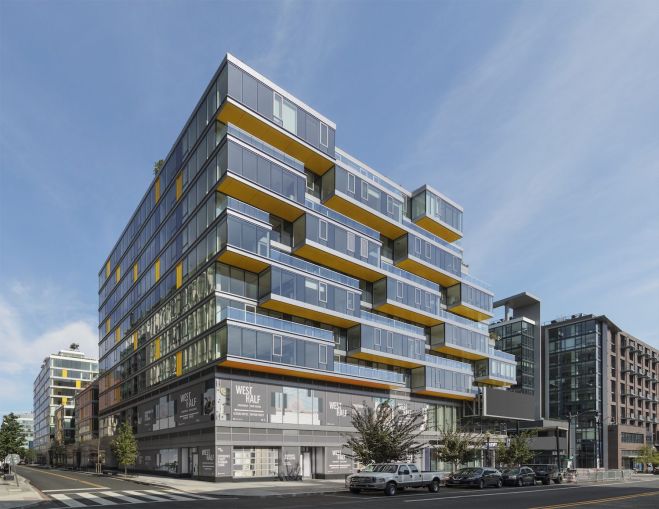 West Half was designed to be an architectural outlier  anchoring the Ballpark District in Washington, D.C. With its all-glass stepped façade mixed with yellow paneling, the 10-story apartment building creates a glowing beacon to Nationals Park for visitors as they pass down the newly envisioned Half Street.

“The project stands apart from other residential projects due to its bold design, amenity platform, retail line-up, enhanced streetscape environment, and one-of-a-kind views directly into Nationals Park that complement and feed off the energy of the game day experience,” Tony Greenberg, executive vice president of development at JBG SMITH, told Commercial Observer.

Playing off that proximity, the building’s unique multi-story cantilever design allows each floor above the third to peel back from Half Street, creating oversized terraces with views directly into the stadium.

“Thanks to the creativity of our design and engineering teams, we managed to give more than half of the units this fun vantage point, allowing residents and superfans an unrivaled way to enjoy baseball from the comfort of their own homes,” Greenberg said.

Eran Chen, founder and executive director of design firm ODA, which was charged with the design of the 456-unit building, said his goal was to take advantage of this new emerging neighborhood by introducing a new type of architecture and creating a new mold for others to follow.

“D.C. has a lot of boring architecture, but this new neighborhood offered up the opportunity to inject something smart, sophisticated and modern, which the market was demanding,” he told CO. “JBG Smith asked us to develop an innovative approach that would comply with the strict Washington D.C. regulations, while creating something iconic for the neighborhood. We all took on the belief that ‘If you build it they will come,’ and sure enough, the building is 98 percent leased.”

Select units at West Half were originally intended to be condos, but after JBG SMITH’s spin-off from Vornado Realty Trust in 2017, the company pivoted to a new plan that included only rentals and utilized the penthouse space for additional community amenities.

The building opened in the fall of 2019, achieving LEED Gold certification by incorporating sustainable strategies such as cisterns that harvested water for the building’s irrigation, as well as extensive green spaces that occupy 50 percent of the rooftop.

“In addition to the best-in-class views into Nationals Park, we created a two-story amenity penthouse that provides tenants with an experience unmatched even by a stadium skybox,” Greenberg said. “A sophisticated retreat for residents even in the off season, the penthouse features a floor-to-ceiling glass wall that peels back, blending the inside with a large outdoor terrace and pool deck.”

West Half residents also have access to a fitness center, 24/7 concierge and housekeeping services, bike storage and on-site parking.

Chen noted West Half is located on a site that offered many constraints—it was too wide for an efficient double-loaded residential building, yet too narrow for the typical courtyard building.

“These constraints, paired with D.C.’s strict regulations on privately developed buildings, led to a complete re-thinking of what an iconic design here could mean,” he said. “The resulting design breaks up the conventional D.C. building mass to create something that feels more intimate, more connected to the streetscape and the neighborhood.”

The retail mix at West Half has been thoughtfully curated by the JBG SMITH team to complement the existing retail at its adjacent rental building, 1221 Van.

“By placing the residential building entrances on Van Street, we were able to create one contiguous storefront along Half Street that has helped to establish the corridor as an iconic thoroughfare in the heart of the District,” Greenberg said. “From a design perspective, we outfitted the street-level facades with roll-up garage doors to create a truly free-flowing retail and dining experience.”

The airy and energetic interiors at West Half are pockets of excitement themselves, defined by gently angled elements, minimalistic details, and a few tectonic finishes.

“The building’s indoor-outdoor connection is bolstered by elements such as the large indoor gym, which is connected to the adjacent inner courtyard, as well as the landscaped rooftop pool and resident lounges,” Chen said. “Another one of our favorite design features are the built-in planters in each of the private terraces, which have an automated watering feature, allowing the façade to grow and evolve with the seasons. It adds a dynamic, living factor to the already lively yellow balconies.”

The design of West Half has embedded itself into the revitalization of the Navy Yard.

“West Half is an expression of what the future of urban living can be,” Chen said. “The cascading terraced facade visually connects neighbors and fosters community beyond the walls of the building. The fractal nature of the design creates a language that speaks to residents as well as the public who experience the building from the street. We like to believe these different points of interaction will lead to a better quality of life for all who experience it.”