SoCal Leads Nation With $5.7B in Industrial Sales in 2021

The nation closed $36.6 billion in industrial real estate sales, setting a new record for the first eight months of the year. 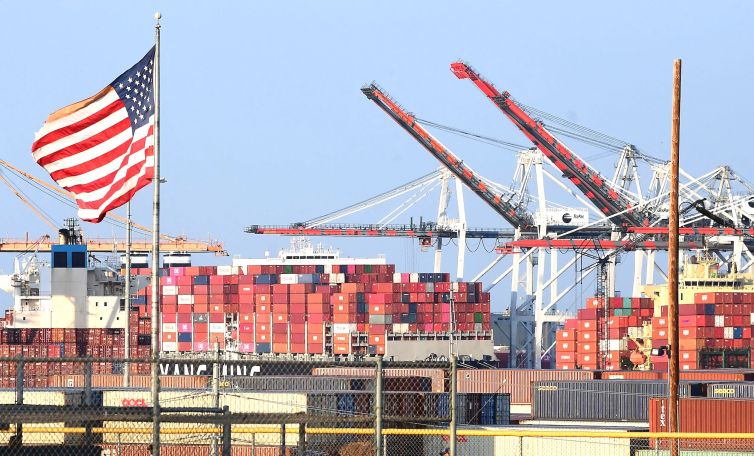 A US flag flies near containers stacked high on a cargo ship at the Port of Los Angeles on September 28 in Los Angeles. A record number of cargo ships are stuck floating and waiting off the southern California coast amid a supply chain crisis which could mean fewer gifts and toys for Christmas this year as a combination of growing volumes of cargo, Covid-19 related safety measures and a labor shortage slow the handling and processing of cargo from each ship. Photo: FREDERIC J. BROWN/AFP via Getty Images

American ports are busier than ever, shattering records set in 2020 while driving the hottest part of commercial real estate — most notably in Southern California.

Growing volumes of cargo, COVID-19 safety measures and a labor shortage have all led to a record number of cargo ships lining up to wait off the U.S. coast amid a supply chain crisis. A new report from CommercialEdge shows industrial properties in port markets are in high demand with the highest rent growth in the nation.

By the start of last month, the nation closed $36.6 billion in industrial real estate sales, setting a new record for the first eight months of the year. And $6.6 billion was signed in August alone, suggesting that transactional activity will continue at a strong pace.

Los Angeles, the Inland Empire and Orange County combined for more than 15 percent of all sales volume so far this year. L.A. led the nation in sales at $2.8 billion after eight months. The Inland Empire took in $2.3 billion during the same time period.

For example, CenterPoint Properties bought a former K-Mart distribution center in the Inland Empire for $215 million in March 2020 and sold it to Costco for $345 million this May. And, in a deal that closed at the end of August, CenterPoint acquired a property in L.A. County in a sale-leaseback with Miami’s Moishe Mana for a whopping $363.88 per square foot.

Industrial vacancy rates are also generally lowest in port markets, with the tightest in the nation in the Inland Empire at 1.2 percent. Vacancies are also tight in Los Angeles at 3.2 percent; Orange County at 3.5 percent; and New Jersey at 3.6 percent.