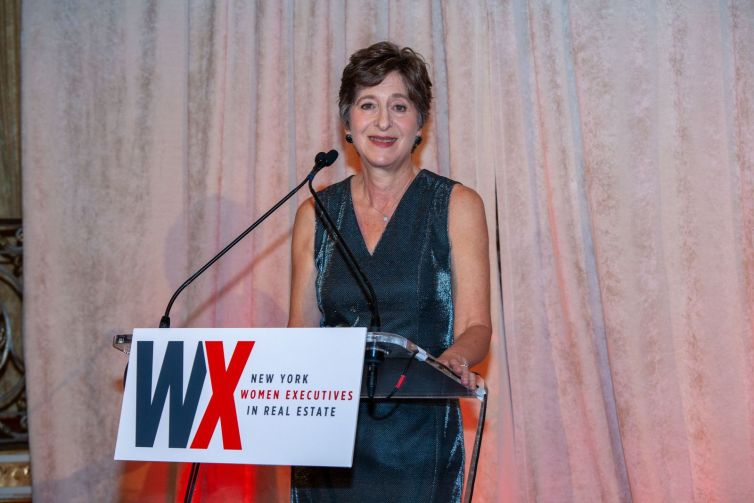 Elise Wagner speaking at the 2021 New York Women Executives in Real Estate Woman of the Year gala where she was honored. Photo: Greg Morris

Elise Wagner, a partner in Kramer Levin’s land use department, was named the 2021 New York Women Executives in Real Estate (WX) Woman of the Year on Thursday evening.

WX selected Wagner for this award due to her achievements at Kramer Levin, where she’s worked since 2005, as well as for her contributions to WX. She has been involved with the organization for more than a decade and has been both a board member and a chair of the programming committee.

WX originally awarded Wagner the title in 2020, but, like most events caught in the pandemic’s timeline, the celebration at the Plaza Hotel was postponed and replaced with a digital ceremony that honored past winners.

This year, Wagner was able to receive her award in person — an experience she finds invaluable, thanks to her predominantly female audience.

“This was one of the first major events that many people had been to,” Wagner told Commercial Observer.  “There’s always something special about the WX women of the year events. … There aren’t that many events that one goes to that are primarily women, and there’s really a different energy in the room.”

She added that WX has been especially helpful for her over the past year, as the organization facilitated virtual programming that kept her in touch with other women leaders. Such networking formed the core of Wagner’s speech, which highlighted the importance of connectivity across the board for women in the industry.

“I believe that the connections between people are what nurture us, and allow us to persevere in our lives — to persist, shall we say — and to find joy in life,” she said in her speech. “[WX] is about the connections that each and every member feels to the cadre of strong, accomplished women who comprise the membership of WX.”

Wagner urged young women to apply for scholarships when first starting out, but that can only go so far, she acknowledged, so making connections is the most reliable fallback. Young women, whether in law or real estate, should begin by reaching out to anyone remotely within their network, whether it’s a direct contact or a friend of a friend.

“When young women get in touch with me, I try as much as possible to be helpful, to chat with them on the phone, to introduce them to people, and so on,” Wagner told CO. “And I think there are a lot of women who try to do the same thing because we’re aware that it can be very, very difficult when you first start.”

The challenges when first starting out vary. For lawyers, an early-stage career follows a somewhat linear path, beginning with specialized degrees and prescribed benchmarks. Yet aspiring real estate professionals lack this structure, so getting one’s footing can prove challenging, according to Wagner. Both beginnings, however, overlap with at least one specific barrier: both industries are predominantly male.

“All of the women in this room know that it takes hard work and a fair amount of diplomacy for a woman to be successful in a business that is dominated by men, and law is no exception,” Wagner said in her speech.

While women comprise 47 percent of associates in law firms, only 21 percent of equity partners are female, according to a 2020 report by the National Association for Law Placement. Meanwhile, women make up 37 percent of the commercial real estate industry — a statistic that has remained stagnant for the last 15 years, according to a 2020 CREW Network benchmark study. Even within that 37 percent, barriers remain; a pay gap lingers, while women hold under 10 percent of C-suite positions, Wagner noted.

Beyond the professional obstacles, personal barriers tend to hold women back. The balance between career and motherhood, for example, often forces females to choose, and for the women who do it all, striking the right balance is a juggling act.

Granted, conditions for working women have improved — albeit slowly — across the industry. Wagner cited a 2018 American Institute of Architects report that found that women partners in architectural firms have increased by 18 percent over the last decade. Meanwhile, the number of women in construction is slowly on the rise, though they still only comprise 10 percent of the field’s total demographic.

As for women in law, Wagner — who works on approvals related to development in New York City — has continued to carry the ball and is currently working on various rezoning projects. Her efforts are focused on the rezoning of the Terminal Warehouse building in Chelsea, as well as working with Plaxall on the Long Island City, Queens waterfront.