Trinity Church had been a tenant (and landlord) in Lower Manhattan since the 1700s. On 9/11, it was much greater than just that. And there was more to its story that followed. 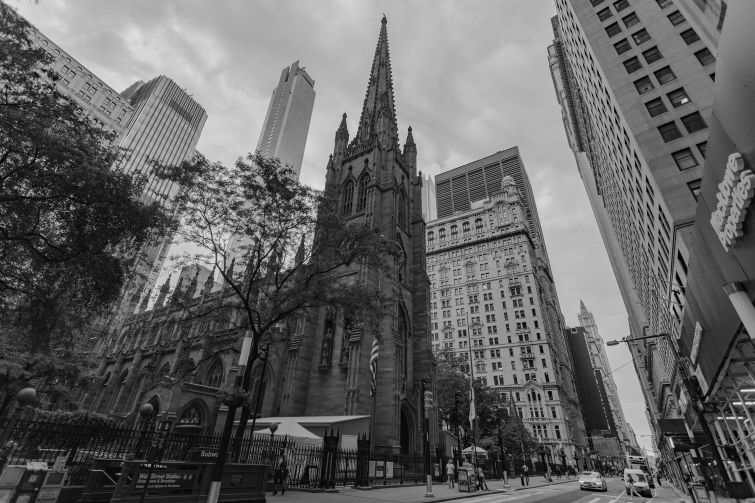 Trinity Church became a symbol in the wake of 9/11 catering to responders, but reopened to the public by August 2002. Photo: Sasha Maslov/for Commercial Observer

It was a miracle the chapel remained standing.

In the darkest day in New York City’s history, some 1.8 million tons of rubble spilled into Lower Manhattan when the Twin Towers fell, coating the surrounding blocks in a film of ash.

The following day, Rev. Lyndon Harris arrived at St. Paul’s Chapel, two blocks east of the World Trade Center, and he was surprised to find the site had sustained little harm. Debris caked the exterior of the 18th century building and its churchyard, but a large sycamore tree prevented any broken windows or structural damage.

Once the building was deemed sound, parishioners embarked on an extensive cleanup. As they worked, firefighters, construction workers and volunteers searching Ground Zero for survivors in 12- to 18-hour shifts wandered into the chapel and its sister parish, Trinity Church Wall Street, for a respite.

The months that followed were overwhelming for everyone on the grounds.

“It was an emotional and sensory overload,” said Andrew Breslau, senior vice president for the Alliance for Downtown New York and a CNN producer at the time. “You were near the site of almost unimaginable tragedy, and the sense of life lost and tragic heroism in play was palpable around you. It was an overwhelming human and material tragedy for the neighborhood, and throughout it all, Trinity and St. Paul’s stood as a literal beacon of endurance.”

The chapel kept its doors open all night for workers to sleep in its pews, and hundreds of volunteers served them hot meals off a grill in the yard. More than 3,000 people passed through a mere three months after Sept. 11. The church also held community gatherings for residents with concerns about environmental conditions in the neighborhood.

“We had concerns about the effectiveness of the cleanup and the church opened its doors for a pivotal community meeting with different environmental officials,” said Alan Gerson, then-New York City Councilman for Downtown Manhattan.

Suddenly, Trinity Church — which had grappled with dwindling membership and sought to become a ministry for young people — became a global symbol of resilience.

People around the world sent flowers, banners, posters and letters of support that were affixed to a fence surrounding the church. A closing service was held for rescue workers in June 2002 and the chapel reopened to the public that August.

But the church’s leadership grew weary over how long its emergency response had lasted. Rev. Harris resigned from his post in October 2002. The following month, workers carefully removed memorial mementos and began dismantling the fence.

“I’m grateful to Trinity for the opportunities that were given me,” Harris told The New York Times in November 2002. “The St. Paul’s experience [dismantling the memorial] just about killed me, but it was one of the rarest privileges I’ve ever had, to catch a glimpse of the kingdom, to see the church as what it can be. It will haunt me for the rest of my life, to try to bring that experience to bear on other facets of the church.”

Trinity Church would soon benefit from the neighborhood it had served in a period when it was most needed.

Since its founding more than three centuries ago, under the charter of King William III of England, the church owned 215 acres of land in Lower Manhattan gifted by Queen Anne in 1705. By the 21st century, its holdings from that gift consisted of 14 acres concentrated in Hudson Square.

Hemmed in by Clarkson, Varick, and Canal streets, Hudson Square contained a swath of charming Federal-style townhouses and warehouses that once contained printing companies. By the 1970s and 80s, technology and design companies began to fill up those former factories. Media and advertising firms soon followed.

As tenants in creative industries began to fill this sleepy swath of the city, Trinity Church hired Carl Weisbrod, an urban planning expert and Alliance for Downtown New York founding president, in 2005 to manage the institution’s real estate portfolio.

Weisbrod, who helped clean up Times Square during the Koch administration, pushed to rezone the neighborhood from manufacturing in order to add more housing and retail options to a burgeoning commercial area. By 2013, the city council approved the rezoning and Hudson Square was on the verge of becoming New York’s hottest neighborhood.

Two years later, Trinity made another consequential decision to make better use of its remaining assets. The church entered into a joint venture with Norway’s Norges Bank, maintaining a 51 percent stake in the newly formed Hudson Square Properties. In 2016, Trinity and Norges tapped developer Hines to manage its portfolio of a dozen office buildings.

“We helped conceive with them a master plan for the neighborhood,” Craig said. “Other members from Trinity were interested in the blocking and tackling of development: How do we spend money, achieve higher leasing levels, and generate faster rent and faster rent growth?”

Hines has had no trouble attracting marquee tenants. Since 2016, Hines has secured 71 leases and rented out a total of 2.5 million square feet for the Hudson Square venture. Among them are Disney, which has been building its 1.2 million-square-foot headquarters at 4 Hudson Square after signing a $650 million lease. And Google is splurging more than $1 billion on its new headquarters at 315 and 345 Hudson streets.

More people are flooding the area, too. Another 17 residential buildings with 1,263 units have gone on the market since then, while 236,323 square feet of residential space is under construction. Once the homes are completed, Hines expects 10,000 more people will move to the neighborhood — a 400 percent increase from its current population.

The partnership has been extraordinarily fruitful for everyone involved. Proceeds from the venture have totaled $1.73 billion in the four years after it was conceived, and Trinity Church earned just over $300 million from its 2017 holdings, The New York Times reported. Trinity’s real estate portfolio is believed to be worth about $6 billion.

This year, Trinity will open a 26-story tower at 74 Trinity Square that will serve as the church’s community center for the 21st century. The Pelli Clarke Pelli Architects-designed complex will be modeled after the 92nd Street Y and provide Sunday school classes, fitness instruction and computer labs, and host cultural programs for the community.

“We’ve done institutional partners as capital sources and as landowners, but Trinity is different in that, it’s OK for other people to say they’re doing well and doing good at the same time, but Trinity means it,” Craig said. “Like all institutions that are old, it’s had good, and not so good, historical periods. It is in a very positive one right now.”