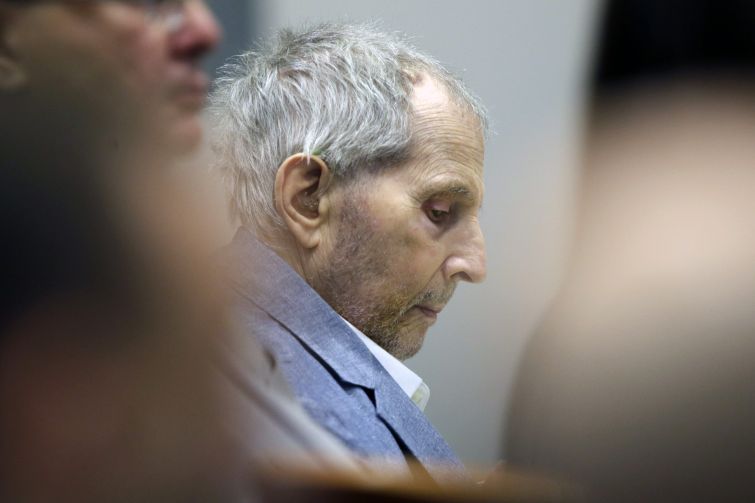 If you Google the name Robert, Robert Durst is the third celebrity Robert to come up in search results, behind Pattison and Downey Jr. He’s a smidge ahead of DeNiro.

Robert Durst, 78, is best known for two things: the trail of violent deaths he’s left behind, and being a scion of one of the wealthiest real estate families in the U.S. If he had played his cards right, he’d have been a multimillionaire, maybe a billionaire. Instead, he’s looking at the rest of his life behind bars.

While it’s not totally clear why Durst stood out amongst the thousands of people accused of murder every year, it appears to have something to do with his apparently limitless access to money. Even with 39 years of being under suspicion, and having been long disowned by the Durst family, he is worth $65 million, according to the website Celebrity Net Worth.

Or, it may have to do with his penchant for cross-dressing and his habit of urinating in strange places, like wastebaskets and convenience store displays. And there’s his rumpled, disheveled, Everyman shtick — his way of looking and acting disorganized and vulnerable.

And, of course, there’s the three unsolved murders that he was long suspected of and could never quite be proven to have committed. Make that two.

On Friday, Sept. 17, the day after Yom Kippur — the day of atonement — a Los Angeles jury convicted Robert Durst of the murder of Susan Berman in 2000.

Berman was supposedly Durst’s best friend, who helped him when he was suspected in New York of murdering his first wife, Kathie McCormack Durst, whose body has never been found. Berman, prosecutors said, called detectives pretending to be Kathie after her disappearance, helping to throw them off the trail.

The trial had been delayed 14 months due to the COVID pandemic. Durst watched his trial from a wheelchair, having been diagnosed with bladder cancer.

In the end, Durst’s hunger for fame might have gotten the best of him.

It was his idea to sit down with the person most obsessed with his story, Andrew Jarecki, for video-recorded interviews that appeared in Jarecki’s six-part documentary on the murder cases, “The Jinx: The Life and Deaths of Robert Durst,” which HBO televised in 2015, according to that documentary.

Jarecki also was the director of a 2010 movie, “All Good Things,” a fictionalized telling of Durst’s marriage to Kathie, starring Ryan Gosling and Kirsten Dunst as the tragic couple.

Jarecki, who said in the documentary that he has a thing for “monsters” and what made them that way, could not be reached, despite voicemails and emails sent to his agent and lawyer.

On “Good Morning America” shortly after the conviction, he told George Stephanopoulos that he feared Durst, and that he hired security officers for protection just before filming the final episode of “The Jinx,” during which he confronted his subject with a letter only Berman’s killer could have written, identifying where authorities could find her body.

It was after that interview that Durst went to the restroom and, talking to himself and unaware that he was being recorded, said he had “killed them all” — the three victims whose deaths he had spent years evading responsibility for. This “confession” was played for the Los Angeles jury which found him guilty of Berman’s murder.

One of his defense lawyers, David Chesnoff, told the Associated Press that Durst plans to pursue all avenues of appeal. He said the prosecution case left “substantial reasonable doubt.”

Shortly after Berman was killed, Durst was arrested in Galveston, Texas, accused of the death and dismemberment of an elderly neighbor, Morris Black, who lived in the same apartment house as him. Durst was acquitted of the murder, saying the killing was in self-defense, but admitted that he “panicked” and dismembered the body, parts of which ended up floating in Galveston Bay. (Durst had pretended to be a mute woman named Dorothy Ciner when he rented the apartment.)

After failing to show up at his arraignment in Galveston, Durst became a fugitive, until he was arrested for trying to steal a hoagie at a Wegmans in Pennsylvania, according to the HBO documentary.

Douglas Durst, Robert’s younger brother and head of the family real estate empire, had little to say about the conviction.

The Durst Organization that Douglas Durst chairs has been prominent in New York real estate for three generations and counting. The family has interests in One World Trade Center, the tallest building in the Western Hemisphere; One Bryant Park, the New York home of Bank of America; and One Five One, a tower once known as Four Times Square and the Condé Nast Building; among many other New York buildings.

“Our thoughts are with the victims of Robert’s crimes,” Douglas Durst said in a brief statement emailed by his spokesman (it was their father, the late Seymour Durst, who picked Douglas to take over the family business, rather than the older Robert). “”The jury’s conviction holds him accountable and, hopefully, brings a measure of closure to the families and friends of the people Robert has hurt.”