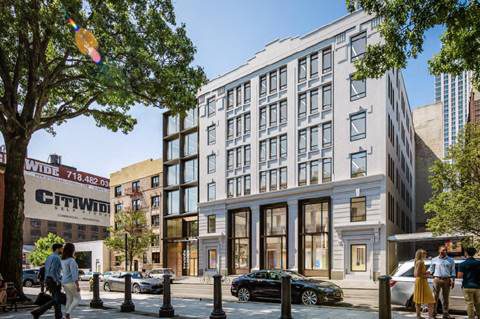 Life sciences company Opentrons is moving its headquarters from Dumbo, Brooklyn, to 47,790 square feet in Long Island City, Queens. And it’s bringing its own Pandemic Response Lab with it.

Opentrons, which builds robots that automate parts of experiments like pipetting, signed a 10-year lease for the space at 45-18 Court Square West in the spring, Crain’s New York Business first reported. Asking rents were $85 per square foot, on a triple-net basis, according to a landlord representative.

The deal was sweetened, thanks to the city’s life sciences initiative, which Mayor Bill de Blasio dedicated $500 million to in June, adding to the $500 million he promised five years earlier. The six-story development from landlords King Street Properties, The Carlyle Group and GFP Real Estate, comes with a 20-year real estate tax abatement, which makes it more affordable for the tenant.

The Pandemic Response Lab has already moved into 13,000 square feet of the six-story office building, also known as Innolabs, Harvey said. The rest of the space will be divided up between Opentrons and its other subsidiary, genomics company Neochromosome, after Opentrons relocates from its 20 Jay Street headquarters in early 2022.

The Pandemic Response Lab is contracted by the city to process COVID-19 tests from NYC Health + Hospitals facilities within 48 hours. It has also sequenced variants of the coronavirus for public health officials since its launch in June 2020, Crain’s New York reported.

Opentrons marks the first lease for 276,000-square-foot Innolabs development, though Harvey said the property had received a lot of interest from a variety of institutional and startup life sciences companies.

Newmark’s Harvey, Jared Horowitz, Jordan Gosin and Emma Kistler handled the deal for the building’s ownership. It was not immediately clear who represented the tenant.