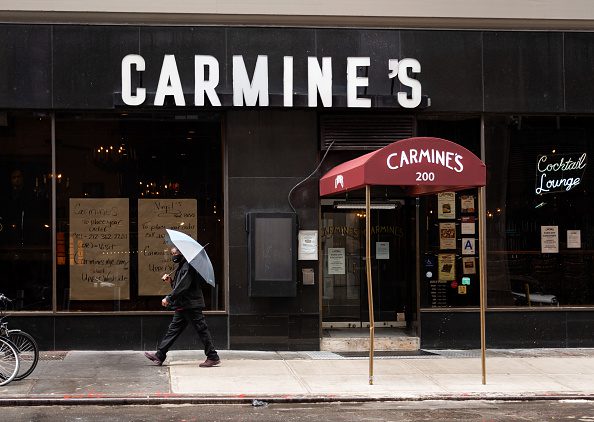 A Carmine’s Italian Restaurant hostess was attacked Thursday evening for asking to see proof of vaccination for a group of out-of-state restaurant-goers — as is required by the city for indoor dining.

A group of women — tourists from Texas visiting the Upper West Side eatery — attacked the 22-year-old worker at about 4:50 p.m. on Thursday, nearly knocking over the host podium in the melee, cell phone footage obtained by NBC shows.

As fists fly, patrons and a waiter appear to attempt to pull people away from the fracas, the video shows.

“It’s a shocking and tragic situation when one of our valued employees is assaulted for doing their job — as required by city policies — and trying to make a living,” a spokesperson for the restaurant said in a statement. “Our focus right now is caring for our employee and the rest of our restaurant family.”

Three women — 49, 44 and 21 from Houston and Humble, Texas — were arrested at the scene and charged with assault and criminal mischief, police said. They were released, but asked to return to the city to appear before a court, Ishmael said.

“We are a family-style restaurant, and this is the absolute last experience any of our employees should ever endure and any customers witness,” the Carmine’s spokesperson said.

The attack raised concerns about the risks restaurant staff may face in enforcing the city’s vaccination requirement for indoor venues including concert halls, restaurants, museums and gyms. While the requirement has been in effect since mid-August, the city only just began enforcing the mandate through fines this week.

The New York City Hospitality Alliance called on Mayor Bill de Blasio to increase the awareness campaign of the vaccine requirements — especially to tourists —  and intends to work with the NYPD to prevent other attacks.

“Assaulting a restaurant worker for doing their job is abhorrent and must be punished,” said Andrew Ridgie, the executive director of the trade group, in a statement. “We’re calling on the city and state of New York to immediately increase penalties for assaulting restaurant workers in New York City in conjunction with enforcement of COVID-19 protocols.”