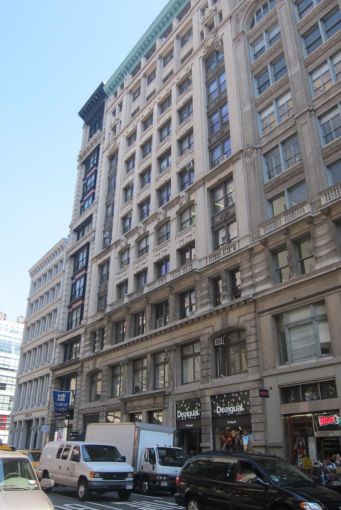 Wilson Sporting Goods has leased 10,200 square feet across two storefronts in SoHo for a pop-up tennis history museum — which opened Thursday before the U.S. Open — and its first New York City brick-and-mortar retail store at 594 Broadway, Commercial Observer has learned.

The 3,200-square-foot pop-up between Houston and Prince streets highlights the accomplishments of legendary tennis players like Jack Kramer, Roger Federer, Serena Williams and Billie Jean King, who was on hand for the museum opening. The space also sells tennis-inspired apparel, custom rackets and balls, footwear and accessories. A second-floor “sky box lounge” will host events and tournament viewings.

Next door in the same building, Wilson has leased 7,200 square feet in a long-term deal for its first New York City store and its second outpost in the country, according to brokers involved in the deal. The store, which is expected to open this fall, will sell Wilson sporting goods and its new athleisure line, Wilson Sportswear.

The flagship will “allow consumers to immerse themselves in the world of sport and interact with the Wilson collection of sportswear and sporting equipment, focusing on high-performance and special edition products,” according to a press release from Newmark. Asking rent for the space was $185 per square foot.

The 108-year-old manufacturer of baseball, tennis and volleyball equipment opened its first-ever store in its Chicago hometown last month.

Newmark’s Ariel Schuster, Ben Birnbaum and Andrew Taub represented the landlord, GFP Real Estate, in the transaction. Schuster and Vela Retail Advisors’ Jessica Connolly handled the deal on behalf of the tenant. Connolly did not immediately return a request for comment.

“NYC is the retail epicenter of the U.S.,” Schuster said in a statement. “SoHo is the perfect setting for Wilson’s flagship store and will allow its millions of current customers to experience the brand in person.”