Why Moinian Chose Investing And Building Throughout The Recession 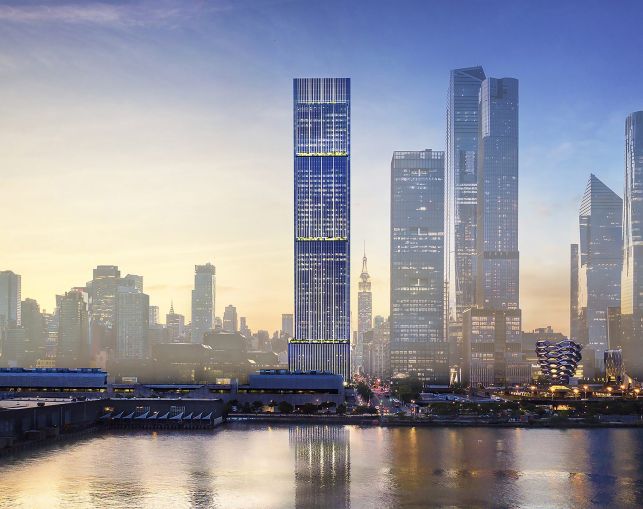 The foundation of 3 Hudson Blvd. was completed just in time for the return of NYC's leasing market. Moinian anticipates securing an anchor tenant for the building and going vertical later this year. rleigh

The Moinian Group is one of the largest privately-held real estate groups in the U.S., with a portfolio of over 20 million square feet. They recently deepened an already enviable team with the hiring of Ted Koltis, former head of Colliers International’s Eastern region agency and consulting practice, as their head of commercial leasing. Partner Insights spoke with Koltis about why he chose to join The Moinian Group, and why the company bucked conventional wisdom throughout the pandemic.

Commercial Observer: What is it about The Moinian Group that enticed you to join the company?

Ted Koltis: The Moinian Group has built a tremendous commercial portfolio and was looking to take their leasing practice to the next level. Creating value on the ownership side is something I’ve had success within the past both with Paramount Group and Tishman Speyer. So I saw a company in The Moinian Group that had tremendous assets, had been pioneers in Midtown South to become one of the largest owner of Class A assets in that submarket and is a long term owner. So the opportunity to take this portfolio and think about it in a holistic way was very enticing to me.

There is  a real focus on what’s next in the office market to entice tenants to come back, and a general feeling of hospitality making its way into commercial office buildings. It’s more important than ever to have tenants see their office as a comfortable, welcoming space. So you’re seeing landlords do things with their lobbies like soft seating or cafes – things they wouldn’t have done in the past. For a lot of landlords, this is experimental. For us, it’s part of our DNA. We’re a hospitality company that, among other things, develops and manages a first class residential and hotel portfolio. So another opportunity I saw was taking that quality and success on the residential/hotel side and merging it with what traditionally has been a separate type of business on the office side.

Another major draw for me was the upward trajectory of the portfolio in size and quality given that we have two significant office building developments in the pipeline. One is The Chelsea Arts building at 220 11th Avenue, a 200,000-square-foot office building in the Chelsea arts district. We broke ground pre-COVID but put the project on hold for obvious reasons and we are looking to restart that project shortly. Offering class A office space, with floor-to-ceiling glass construction is a product not really available within that submarket. It’s going to something special.

And the jewel of the portfolio is 3 Hudson Boulevard, a 1.8 million-square-foot stand-alone office tower we’re co-developing with Boston Properties designed by FX Collaborative. 3 Hudson Boulevard is the last and arguably best site in the Hudson Yards District with direct access to the 7 line, unobstructed views of the Hudson River, and overlooking the new Bella Abzug Park. So I see at least 2 million square feet of prime, class A new construction office space in the pipeline here as another opportunity to bring The Moinian Group’s portfolio and name to a more institutional level, and to be thought of as not just one of the largest commercial office owners in Manhattan, but one of the most diverse owners when you think about the products we have spread across different submarkets and different sizes of properties.

Commercial Observer: This past year has seen companies retrench and decrease investment due to the recession. Moinian, however, took a different approach, increasing investment. Why did Moinian take this approach?

Koltis: Our investment strategy represents our position as as a long-term, generational owner. Most of The Moinian Group’s assets have been in the portfolio for well over 15 years. So for us, one cycle doesn’t dictate what we’re going to do with our assets. We had plans for three separate lobby renovations prior to the pandemic, including for 3 Columbus Circle, our headquarters. We’ve owned these properties for a long time, and will continue to. So we did not put the brakes on any of those. For 90 John Street, in Lower Manhattan, we had plans to renovate the lobby, and we continued those plans during the pandemic. That lobby is now getting a high-end modern hotel-type lobby in a pre-war building. The uniqueness of that design represents what we want our properties to be. And then one of our most ambitious lobby undertakings is 17 Battery Place, where we are creating a new lobby and public plaza behind the building. With the amount of new development and renovations that have taken place, the west side of Lower Manhattan is one of the most modern parts of New York City right now on the office side and we want 17 Battery to participate in that revival.

CO: Did Moinian perceive any potential risk from this approach?

Koltis: I don’t think we look at it as a risk, because we are long-term owners. Calculating risks is for the short-term view. That’s not the way we think about it. Investing now in our office properties only enhances our ability to attract high-end tenants both in the short and long-term.

CO: So does this approach give Moinian a competitive advantage over firms that took a more guarded approach during the pandemic?

Koltis: Certainly. Many owners and investors have to account for why they’re making capital improvements to their properties – what’s the short-term payback? Because of the longer-term approach we take, we’re not hindered by that. It makes us more nimble, more creative, and definitely more willing to do things outside of the box in terms of how we do deals.

CO: How does Moinian expect this approach to affect the value of its properties?

Koltis: I’m a big believer that good occupancy drives good leasing behavior. We have the expertise in-house where we can be competitive wherever the market takes us. And if we’re responsive in that way and drive good occupancy, that undoubtedly will drive value in every market cycle.

CO: What other Capital Improvement projects is The Moinian Group working on right now?

Koltis: We renovated both lobbies at 535-545 5th Avenue, and we finished construction at 1430 Fulton Street in Brooklyn, which is a residential development. In Lower Manhattan we have an adjacent parcel next to 90 John Street, 7 Platt Street, which is another new development that will be mixed-use, office, and residential.

CO: What’s next for Moinian?
Koltis: I’m working side by side with Joseph and Mitchell Moinian, who set the tone and direction for the entire organization, building upon what they’d already set in motion. Everything we’re doing – bringing hospitality into the office, creating brochures to standardize our brand across our assets, broker/tenant outreach – we would have done anyway. But on some level, it’s even more important now given everything we’ve gone through over the past 18 months. I don’t see us ratcheting it back once we return to pre-COVID norms. If anything, it’s going to help differentiate us. A goal I share with Joe and Mitch is that when people walk into the lobby of a building owned by The Moinian Group, they’re going to be greeted a certain way, it’s going to look a certain way – there’s going to be differentiation there that we’re looking to put into place for the long term.