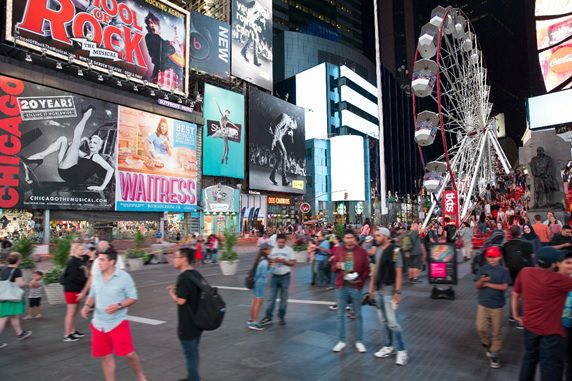 Times Square has always been akin to an amusement park, but it’s about to take that likening literally, with the addition of an 11-story Ferris wheel set to open Tuesday.

Intended to revive the city’s entertainment fabric and contribute to COVID-19 recovery, the Ferris wheel will remain at the Broadway intersection between West 47th and 48th streets for a total of 29 days, including the six days required for setup and disassembly. The ride will offer 110-foot-high views of the Midtown commotion, the New York Post first reported.

The Ferris wheel is the brainchild of Vito Bruno, head of Brooklyn-based AMPM Entertainment Concepts. Bruno told the Post that after bringing the idea to the Times Square Alliance a few months ago, he’s been putting the wheel into motion ever since.

To make the ride a reality, three 53-foot trailers took to the crowded Times Square streets this past week. Construction of the ride is slated to take four days, and, once ready, visitors can expect time slots for the next 22 days.

“This is the time for bold ideas to celebrate our great city!” Times Square Alliance President Tom Harris said in a statement. “A Ferris wheel in Times Square will bring New York City an incredible new way to enjoy Times Square from a completely new vantage point as we navigate these times and reflect on all we have been through this past year.”

Foot traffic to the area has already begun to increase. While it’s still a ways away from pre-pandemic levels, Times Square is on track to recover, thanks in part to Mayor Bill de Blasio’s steps to revive the city’s tourism industry. And the city saw weekly hotel demand hit its highest point since the start of the pandemic last month. As a precursor to Broadway’s scheduled reopening this fall, the Ferris wheel is yet another draw for visitors and locals alike.

That’s not to say getting the ferris wheel put into practice was easy. After the Midtown Toys ‘R’ Us closed in 2015 — shuttering its iconic, indoor Ferris wheel — Staten Island was set to house New York’s next major Ferris wheel. Construction on that ride was halted in 2018, but a much smaller version reportedly is in the works, but it’s not set to debut until 2025, the Staten Island Advance reported.

In the meantime, the Times Square ferris wheel will provide a 12-minute escape for anyone looking to get above the crowds. Tickets range from $15 to $35 a person, with rides available every day from noon to midnight.