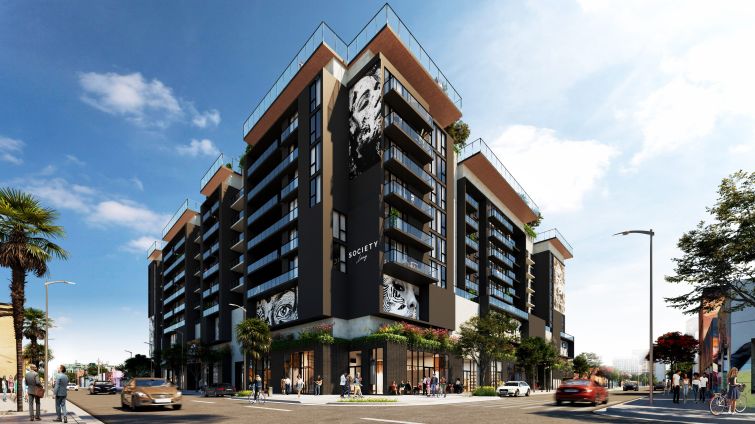 Society Wynwood, located at 2431 NW 2nd Avenue, sits in the heart of the neighborhood, adjacent to the Wynwood Walls art installation between 24th and 25th Street. The developers purchased the 14,905-square-foot parcel for $24.5 million in 2019, property records show.

With construction already underway and slated for completion by spring 2023, the 10-story development will include 318 rental apartments and 50,210 square feet of retail space.

Society Wynwood marks the third rental under PMG’s Society Living brand in South Florida. Society Las Olas in Downtown Fort Lauderdale opened in May, while Society Biscayne in Downtown Miami is set to open by the first quarter of 2022.

Wynwood is one of Miami’s hottest neighborhoods, becoming a favorite among the city’s burgeoning startup, tech and finance scene. Last week, New York-based hedge fund Schonfeld Strategic Advisors announced it would set up a second headquarters at The Dorsey. Earlier this year, Wynwood hosted the Bitcoin 2021 conference, which drew as many as 50,000 visitors.

“Securing this construction loan for Society Wynwood further proves the strength of the Society Living portfolio and the appeal of social apartment communities,” Sami Mouaket, director of U.S. investments and development at Greybrook Realty, said in prepared remarks.

Based in both New York and Miami, PMG specializes in residential projects with a portfolio spanning 8,500 units and more than 16 million square feet of development, according to the company. Headquartered in Toronto, its partner, real estate private equity firm Greybrook Realty, has invested more than $1.4 billion of equity in more than 85 real estate projects across Canada and the U.S., the firm says.