The office park — recently rebranded as Aspiria — spans 3.8 million square feet, across 200 acres, and it is currently in line for an expansive repositioning 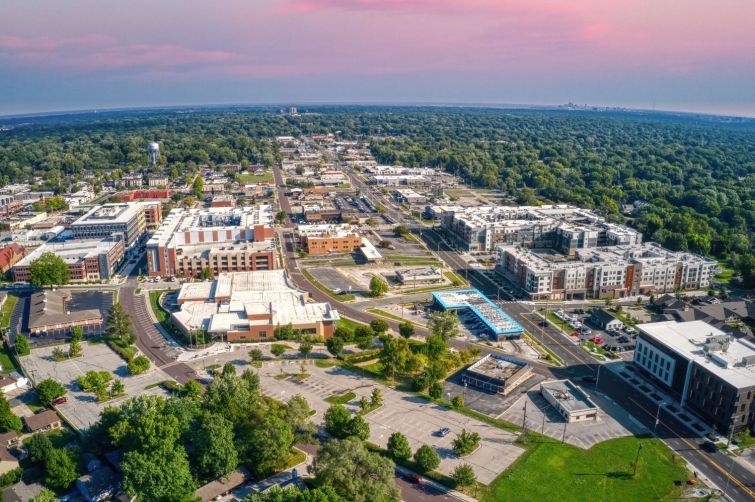 The two-year, commercial mortgage-backed securities (CMBS) loan closed on Aug. 10 to take out more than $188 million in existing debt and fund multiple reserve accounts, including a $30.6 million pool for tenant improvements and leasing commission costs, and a $3.7 million debt service reserve. The loan will accrue a floating interest rate at 4.15 percent above Libor.

The 20-building campus was built between 1999 and 2001 to serve as the corporate headquarters for telecommunications company Sprint and is currently about 41 percent leased out to T-Mobile, which is currently housed in 1.5 million square feet across a number of short- and long-term leases, according to KBRA analysis.

The developer, though, acquired the property with the goal of eventually transforming it into the Midwest’s premier live-work-play campus and one of the largest such sites in the U.S. It has recently made serious headway with its expansion plans.

The property is located at 6050-11501 Sprint Parkway in Overland Park, about 19 miles south of Kansas City and just a few blocks away from a main thruway in Interstate 435.

Occidental rebranded the property — originally modeled after Princeton University’s sprawling campus and was known as the Sprint World Headquarters, according to the property’s website — as Aspiria in December 2020, with plans to eventually deploy hundreds of millions of dollars to leverage the existing amenities to reposition it to a live-work-play hub in Overland Park.

The Wichita, Kan.-based firm obtained mixed-use zoning approvals from the local government in April, and it is now poised to move forward with plans on a large-scale repositioning that would see Aspiria’s square footage expand to 6.34 million square feet. Occidental’s preliminary plans call for about 1.1 million square feet of new office space, which could bring the fully built total to more than 5 million square feet; the company is also looking to add about 383,000 square feet of retail space, 600 multifamily units and a 120-key hotel.

All told, the new development will encompass about 60 acres, and nearly 45 percent of the site, or about 92 acres, will be preserved as green space for the residents, workers and surrounding community.

Occidental has said that it wants to position the site as the second-largest corporate campus in the country, rivaling that of Microsoft’s 15 million-square-foot, 500-acre campus in Washington state, the Kansas City Business Journal reported in May.

Aspiria is currently about 75 percent leased out to more than 30 tenants, with its five largest being T-Mobile, New Directions Behavioral Health, medical billing company Physician Office Partners, retirement plan provider Empower Retirement and TreviPay — all of which make up more than 60 percent of the asset’s total base rent, according to KBRA.