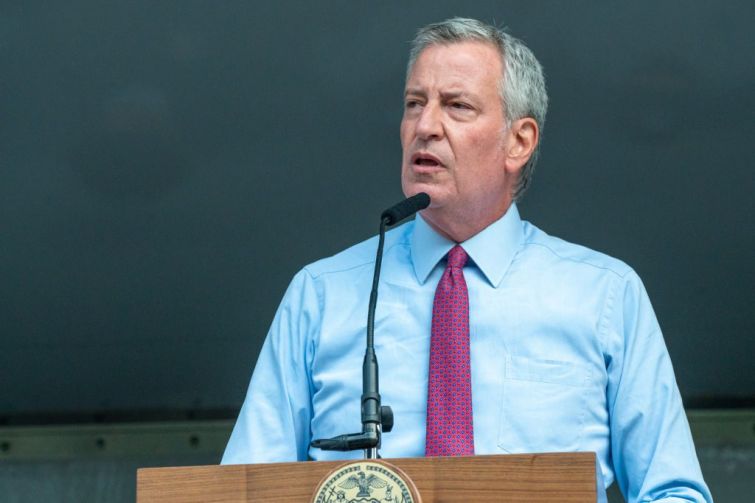 A group of city dwellers and right-wing political hopefuls — among them, New York state Conservative Party candidate for Staten Island borough president, Leticia Remauro — have sued Mayor Bill de Blasio over his executive order requiring that patrons of indoor dining, entertainment venues and fitness spaces be vaccinated against the coronavirus.

Remauro filed a lawsuit in New York Supreme Court on Monday seeking a stop to the vaccine requirement that started last week — the second one that she has filed to kill the mandate, court records show.

“People have the right to choose what they do with their body,” Remauro told Commercial Observer. “The mayor has arbitrarily decided that restaurants, theaters, gyms and other businesses must check vaccine cards in order to have transactions occur.”

A spokesperson for de Blasio did not immediately respond to a request for comment.

The number of lawsuits against the city’s vaccine requirement for indoor activities are growing. Republican Congresswoman Nicole Malliotakis, who represents Staten Island and parts of Brooklyn, joined forces with local business owners to file a suit in an attempt to block the rule earlier this month. The businesses — including Deluca’s Italian Restaurant in Staten Island, Pasticceria Rocco in Brooklyn, and Staten Island Judo Jujitsu Dojo — said the mandate unfairly applies to restaurants, The New York Times reported.

Remauro filed a similar lawsuit in New York Eastern District Court earlier this month. That suit, filed Aug. 12, claims the requirement is illegal because it will unfairly burden businesses, force those who are unvaccinated to give up employment, and that requiring a person to share their vaccination status constitutes an unlawful seizure under the Fourth Amendment.

Both the federal and New York cases are working their way through the court system, and neither case has received a response from de Blasio’s legal team, according to court records.

Meanwhile, the city’s vaccine requirement for indoor venues remains in a trial phase. Starting on Aug. 17, individuals aged 12 and older are now required to show proof that they have received at least one dose of a COVID-19 vaccine to participate in indoor dining, fitness or entertainment. Staff, too, are required to be vaccinated, according to the city. But the program will not be enforced with fines or penalties until Sept. 13, so the city can gather feedback from the businesses, CO reported.

The new rule comes, in part, due to the threat of variations of the virus, like the delta variant, a more transmissible version of the coronavirus that is more likely to cause severe illness. The resurgence of the pandemic has disrupted or delayed many companies’ return-to-office plans as the city pushes for more people to get vaccinated.

Remauro argued in her suit that her public relations company has lost business due to event cancellations ahead of the vaccine requirement. Retired cop William Pepitone, who is running for mayor on the Conservative line and does not want to prove he is vaccinated to hit the campaign trail, joined her in the suit.

“I am not questioning whether the vaccine is good or bad. Nobody is, that’s a personal choice,” Remauro told CO. “But the government cannot force somebody or coerce somebody to do something.”

The suit raises concerns that businesses will lose customers due to the new requirements, that individuals don’t want to share their vaccination status, and that there are few exceptions to the requirement, including one for those unvaccinated people who test negative for the virus. The only exemptions from the mandate are for nonresident sports teams, artists, or those entering a business for a small amount of time (like using the bathroom or picking up an order), which only applies to indoor settings.

Remauro argued that New Yorkers, including health care workers, should not be required to get the vaccine, and that the requirement for indoor venues, gyms, and restaurants should include exceptions for those who don’t want to get vaccines or don’t want to disclose their vaccination status.

“Last year, we had all of our health care professionals working with masks and gloves and protection, and that was the best that we had for them and they got through it,” Remauro said. “They managed to live through it. Some got COVID and survived, some didn’t — a small portion — and the rest it didn’t get it. So, if that was okay last year … why can’t they work the same way they did last year?”

In the first year of the pandemic, more than 3,600 U.S. health care workers died of COVID-19, ABC reported. Worldwide, at least 115,000 health care workers died of the virus, according to the World Health Organization as of May. More than 621,000 people have died from the virus in the U.S., with more than 4 million people dead worldwide, as of the time of publication.

Another petitioner in the suit, Suzanne Newman, who owns Queens’ businesses ​​Matrix Fitness Club in Astoria and FitNation Health Club in Middle Village, claims she has had to turn away members who refused to provide her with proof of vaccination and that they want their money back. Another petitioner is unsure of the legal ground he stands on for refusing to employ an unvaccinated person.

Other petitioners include Anthony Herbert, president of the New York Multi-Cultural Restaurant & Nightlife Chamber of Commerce Corporation and candidate for New York City public advocate; and Tina Forte, who owns a beverage distribution company and is running for a congressional seat in the Bronx. The other petitioners in the suit are city residents who don’t want to disclose their vaccination status.

The lawsuit is not the only way Remauro has attempted to stop COVID-19 related restrictions. Remauro gained national media attention after drawing widespread controversy for saying “Heil Hitler” during a protest at a Staten Island bar against coronavirus restrictions in the spring of this year, NYT reported.

She and four other people also previously sued de Blasio in June to attempt to stop the Department of Health from opening shelters for people experiencing homelessness in Staten Island — a suit that was dismissed on the same day that she announced her two suits against the vaccine requirement.