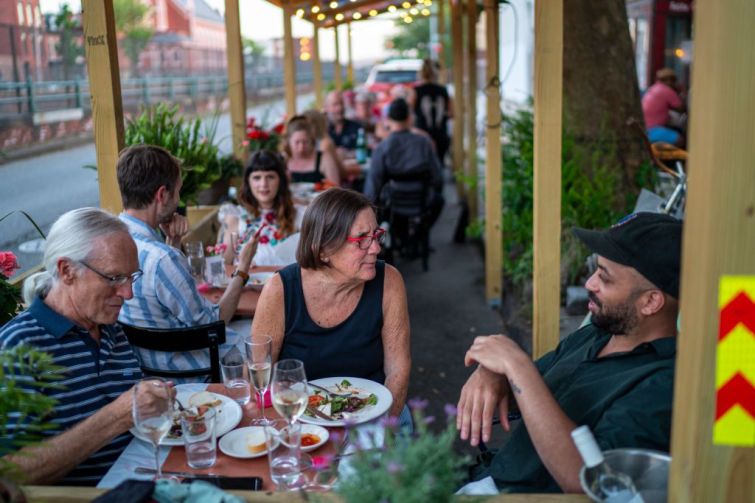 New Yorkers were more comfortable eating out and visiting shopping malls in July than in the two months prior, as the city continues its recovery from the coronavirus, according to a survey from Springboard.

“The weather is much more comfortable for people to eat out,” Diane Wehrle, marketing and insights director at Springboard, told Commercial Observer. “But, also, I think underlying all the results we’re seeing in the consumer survey is the positive impact of the vaccine program.”

Vaccinations have made people feel much safer about leaving the house for eating and shopping, Wehrle said, but concerns over the delta variant, which has so far hampered several companies’ return-to-office plans, might limit the trend in the future. However, Wehrle said consumers are more comfortable now accepting the risk of the virus.

“Now we know what to do to avoid COVID-19 as much as possible,” Wehrle said. “Despite the fact that people recognize it [or] accept that that is a risk, they’re taking the necessary precautions to enable them to carry on with a form of normal life.”

Yet, companies aren’t feeling as comfortable calling their workers back to the office as the delta variant causes a spike in coronavirus cases.

Amazon just pushed its plans to bring corporate employees back to the office to 2022 at the earliest. Google announced in late July that it was pushing its return-to-work date to October from Sept. 6, following Apple which delayed its return by several weeks, citing concerns over the delta variant. But, consumers in July were fairly amenable to being out and about, with 58 percent of consumers surveyed feeling completely comfortable making trips to retail destinations.

With more people working from home, consumers are seeking out lunch and shopping spots near their new home-offices, only taking their business downtown on weekends or when they do go to the office in-person, Wehrle said.

“I think the key thing for a lot of downtowns, and this is going to be something that impacts retail destinations probably in the longer term, will be the extent to which we go back to the office [or] we work at home,” Wehrle said.

More consumers are also mixing online spending with in-person shopping, with 38 percent buying at least half of their non-food items online as opposed to 35 percent in May.