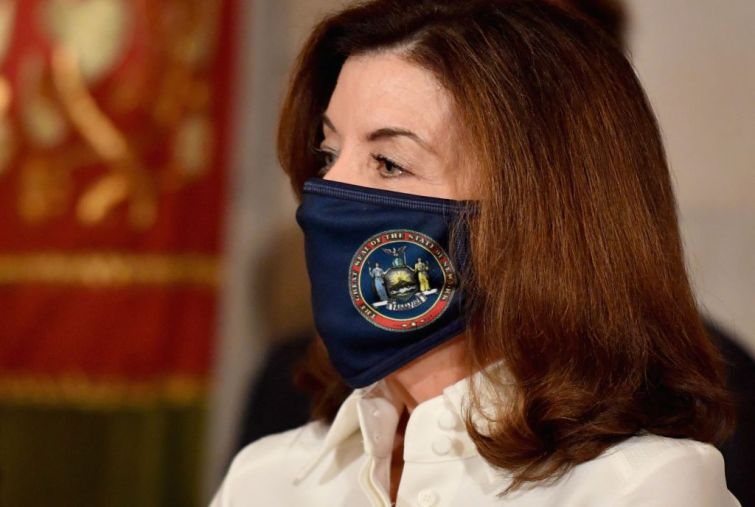 The letter called on Hochul to “take the necessary actions” within her power to keep the moratorium in place, NY1 reported. On Friday, Hochul said she would call for an emergency session to address evictions, promising to work through the weekend to deliver relief for homeowners and renters, after the U.S. Supreme Court invalidated the federal eviction moratorium on Thursday.

But Hochul did not clarify if she intends to extend the moratorium or tweak the state’s rent relief program to speed up rental assistance to tenants, which she vowed to do during her first day in office. New York has $2.7 billion in mostly federally funded rent relief aid, but has only distributed $203 million as of Aug. 23, NY1 reported.

“An extension of the eviction moratorium would allow for the hundreds of thousands of eligible households to apply for [the Emergency Rental Assistance Program] and receive payments to bring them up to date on their rent while keeping them in their homes,” the letter said.

SCOTUS ended the Centers for Disease Control and Prevention’s (CDC) moratorium on evictions in areas experiencing substantial or high levels of COVID-19 transmission, ruling that the ban was an overextension of the CDC’s authority, Commercial Observer reported.

“The government’s read … would give the CDC a breathtaking amount of authority,” the court wrote in the majority opinion. “Could the CDC, for example, mandate free grocery delivery to the homes of the sick or vulnerable? Require manufacturers to provide free computers to enable people to work from home? Order telecommunications companies to provide free high-speed Internet service to facilitate remote work?”

The U.S. Supreme Court’s ruling does not impact states’ ability to impose eviction bans, but if New York decides to let the eviction moratorium expire, there’s expected to be a flood of eviction cases in the court system.

“This is an all-hands-on-deck moment, and Governor Hochul should use her authority to ensure that no one is evicted while we work together to improve the rental assistance process for everyday New Yorkers,” Jeffries said in a statement.