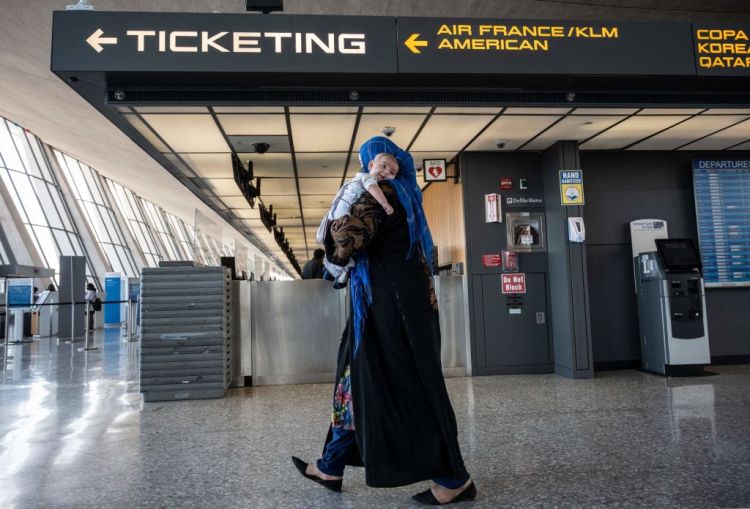 Refugees from Afghanistan are escorted to a waiting bus after arriving and being processed at Dulles International Airport in Dulles, Virginia. Photo: ANDREW CABALLERO-REYNOLDS/AFP via Getty Images

As refugees flee Afghanistan in the wake of the country’s rapid fall to the Taliban, local D.C. organizations are working to house them, with some help from private landlords.

Dozens of Afghan families are arriving in the U.S. and more are expected to follow, with just days remaining until America’s withdrawal deadline from Afghanistan. As they arrive, organizations like Catholic Charities and Lutheran Social Services of the National Capital Area work to secure them homes, furniture, kitchenware and jobs.

“This situation is really changing very rapidly,” said Jessica Estrada, director of newcomer services for Catholic Charities of the Diocese of Arlington. “We definitely anticipate a big increase here in the next week or two, but then we’re really not sure.”

Catholic Charities had helped to resettle 353 special visa holders from Afghanistan from Oct. 1, 2020 through Aug. 25, with 200 of those resettled just in the last two months, said Estrada. The increase in refugees comes after the Taliban — an Islamic military group — took over the country in a matter of days, despite the United States’ 20-year war to keep them out of power.

The organization partners with private landlords to find appropriate housing for refugees and is working with property managers who represent local owners, like Marian Morecock, who works for her mother-in-law’s company, Betty Jo Morecock Realtor in Fredericksburg, Va., and Brian McDonnell, a self-employed property manager who works with private property owners in Northern Virginia.

“These are families who put their lives on the line,” said McDonnell. “They deserve our help. There are a lot of real estate people that won’t touch it. It’s just too complicated.”

Larger landlords can be more difficult to convince to rent to refugees, who often lack a credit score, employment, and other credentials or documentation, said Estrada. But individual owners will offer more flexibility to new families, and some are even new immigrants themselves.

“A lot of people we end up working with were immigrants themselves at one point, if they’re private landlords,” said Estrada. “They tend to be our best advocates because they’ve been through this process, they know that it’s difficult, but they’re willing to give people a chance.”

The landlord Morecock works with, who is a first-generation immigrant herself, is one such example.

Most landlords would be concerned about housing someone who doesn’t have an income, said Morecock, but it hasn’t been a problem for them in the past.

“[Landlords] would worry that they won’t be able to be up and running and pay their own rent,” Morecock said. “In my experience, we’ve never had an issue like that. They would always hit the ground running.”

Morecock has worked with Catholic Charities for more than a decade, and hopes to house three families in properties that are expected to become available in September.

McDonnell has worked with Catholic Charities for five years, and said he had never had a problem with any of his tenants.

Catholic Charities partners with the U.S. State Department along with eight other agencies that work to provide housing and supplies, and that help families adapt culturally. The organization provides initial support to new families in finding jobs, getting a social security card and registering children for school.

Airbnb has also offered its assistance to Afghan refugees. The home-rental giant called on Airbnb hosts to house 20,000 refugees and be paid by Airbnb’s nonprofit fund, The Verge reported.

While Estrada said her friends and colleagues have struggled with the crisis, especially those with family in Afghanistan, she felt optimistic after seeing the outpouring of support from the D.C. community.

“There’s that incredible sadness of what’s happening there and knowing that people are suffering, but on the flip side, the outpouring has been very affirming,” Estrada said. “It’s a beautiful thing to see that people are doing whatever they possibly can. They can’t fix Afghanistan, but they can buy pillows for a new family or buy a bed for a new family. They’re doing what they can do and that means a lot to the families that are coming; it means a lot to us who are working in this field.”