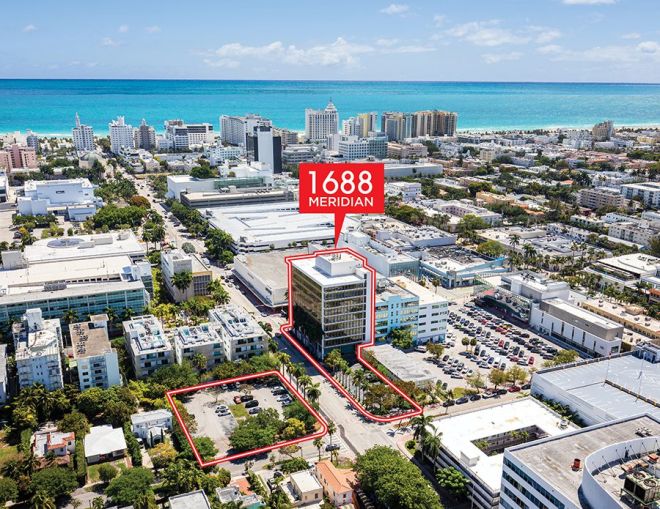 Florida-based Greenacres Management snatched up a 10-story office building in Miami Beach for $49.5 million last week, according to property records.

Ivy Realty sold the 88,419-square-foot office tower at 1688 Meridian Avenue to Greenacres, via the entity 1688 Property Owner, property records show. Greenacres financed the deal with a loan from Värde Partners for about 65 percent of the purchase price, according to a source with knowledge of the deal.

The strong office market, combined with its height — a rarity in Miami Beach — and the fact that it is more than 80 percent leased, made the deal a strong investment, said JLL Capital Markets’ Ike Ojala, who was part of the team that handled the deal for Ivy Realty.

“The office market has really picked up,” Ojala told Commercial Observer. “There’s not that much office space on Miami Beach to begin with. The vacancies have been gobbled up and rents have been growing very rapidly.”

The building’s tenants include Centennial Bank, coworking company Regus, and the soon-to-open restaurant Tacombi on the ground floor, Ojala said. The sale of the property, last renovated in 2019, also included two parking lots at 1699 and 1907 Jefferson Avenue.

The deal, which closed Aug. 26, comes at a purchase price only slightly higher than the property’s last sale in 2016, at $48.75 million, according to property records.

The new owners plan to lease up the remaining space in the building, located between 17th Street and Meridian Avenue, Ojala said. Värde, a global alternative investment advisor founded in Minnesota and named after the Swedish word for “value”, provided the loan because of the property’s location, Ojala said.

JLL’s Ojala, Hermen Rodriguez, Matthew McCormack and Max La Cava handled the sale for Ivy Realty, and were the only brokers involved in the transaction, Ojala said. Another JLL team of Melissa Rose, Max Lescano and Jimmy Calvo represented Greenacres in the loan.