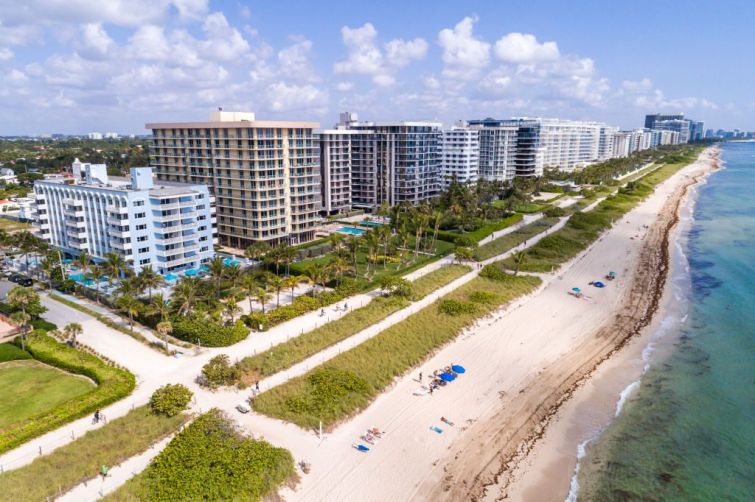 While search and rescue teams looked for signs of life underneath the rubble of the fallen Champlain Towers South, an oceanfront condo up the street sold for $12 million.

The fourth floor unit at Arte Surfside, less than a half mile away from the site of the collapse, traded on June 30, just five days after the 12-story building had fallen in Surfside.

It was not an exception.

Despite the tragedy that claimed 98 lives, Miami’s condo market continues to soar. In fact, the deadly incident is turning out to be great for the real estate business, for owners and developers alike.

Prospective buyers are shunning old properties, similar to the Champlain Towers, in favor of newer options, believing they’re safer than the aging buildings. And, as condo owners take a close look at their decaying structures and find themselves having to pay costly repairs, analysts say they are likely to sell to developers, freeing up valuable land for new projects.

“There’s been no pullback” among developers, said condo lawyer Jesse Dean-Kluger, who represents both unit buyers and developers. “The cranes never go down in Miami.”

Before the tragedy, Miami’s condo market was breaking records. Average prices in Miami-Dade County for condos jumped to $701,104 in the last year, increasing by $283,360 between May 2021 and a year prior, according to data compiled by ONE Sotheby’s International Realty. March, April and May had the three-highest monthly sale totals since at least 2015, the report noted. Northerners were relocating to Florida — attracted by the lack of state income taxes, low costs of living, and year-round warm weather — and remote employees presented a new set of high-end buyers.

The Champlain Towers South catastrophe failed to cool Miami’s sizzling market. The number of completed condo transactions jumped by 159.4 percent, when comparing the two weeks following the tragedy and the same period a year prior, according to data from the Miami Association of Realtors. Prospective buyers weren’t deterred, either. Formal purchase negotiations grew by 77.7 percent during the same time period.

They could be ignoring an important wake-up call. While the cause of the Champlain Towers South collapse remains unclear, the incident highlighted the threat that climate change poses to oceanfront properties, and experts have sounded the alarm about the precariousness of seaside condos as sea levels rise.

And yet — for now, at least — demand for beachfront apartments remains strong, according to the president of Miami-based residential brokerage RelatedISG Realty, Craig Studnicky. “A buyer that wants the beach still wants the beach — but they want something new,” he said.

As buyers shun aging structures, developers are circling them, seizing opportunities. “Now, with the scrutiny, the due diligence and the questions that are being asked [about decaying buildings], only an opportunist is going to pull the trigger” and buy an old property, said condo industry analyst Peter Zalewski.

He predicts a surge in condo terminations as condo owners begin to scrutinize their own faltering buildings in the wake of Champlain Towers South’s collapse and face costly repairs to the tune of hundreds of thousands dollars with few new takers. The procedure allows developers to buy an entire property if more than 80 percent of unit owners agree to sell. Developers typically tear down the existing structure and construct a new one.

Signs are already emerging of a rise in terminations. Developer Mast Capital purchased 90 percent of the units at the oceanfront La Costa, a 15-story condo in Miami Beach constructed in 1964, beginning in May 2021, The Real Deal reported. The building had not completed a safety certification process required of aging structures, and local officials ordered inhabitants to evacuate by August 16 after deeming the building unsafe. The developer plans to replace La Costa with a splashy, 19-story condo building designed by the firm of Pritzker Prize winner Rem Koolhaas. (A representative for Mast Capital did not respond to a request to arrange an interview.)

Although developers treasure oceanfront parcels, they are hard to come by, because South Florida’s coastline is crowded and built up. In response, some launched high-end projects on the mainland, such as The Related Group’s Baccarat Residences in Miami’s Brickell neighborhood and PMG’s Waldorf Astoria Residences along Biscayne Boulevard, also in Miami. Now, the tide may be turning for developers, as seaside condo owners get serious about renovations and may prefer to sell. “It’d be much easier to convince somebody to invest in [an oceanfront] project than one across the street from a strip joint,” Zalewski said.

Of course, it could be too soon to truly evaluate the impact of the tragedy. Only a month has passed since Champlain Tower South’s collapse and the market could still stumble. In the aftermath, the insurance industry may hike rates for South Florida’s coastal properties, or even deem them too risky to insure and cut off coverage, which could deter potential buyers in the long run. Already, Citizens Property Insurance — a state-owned provider meant as a last option for homeowners who can’t get private insurance — ranks as Florida’s second-most popular provider, according to state data.

And yet, even the ill-fated Champlain Towers South may fall into the hands of developers. Earlier this month, a Florida judge approved a potential sale of the fallen building’s site, valued at more than $100 million.