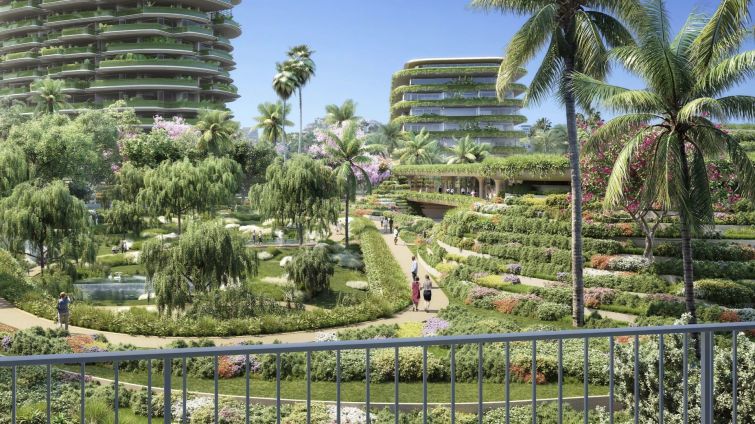 A rendering of One Beverly Hills, Photo: Cain International

Alagem Capital Group and Cain International have landed a $500 million debt package to refinance the Beverly Hilton and the Waldorf Astoria Beverly Hills near Los Angeles as part of their planned megadevelopment at the site, the companies announced Monday.

“We are gratified by the confidence our financial partners have in our vision,” Ted Kahan, president of Alagem Capital Group, said in a statement. “It clearly demonstrates the strength and success of the Beverly Hilton and Waldorf Astoria.”

The refinancing is closing three years after Cain first partnered in 2018 with Alagem, developer of the Waldorf Astoria Beverly Hills and longtime owner of the Beverly Hilton. The partnership then proceeded to acquire the adjacent site at 9900 Wilshire Boulevard from Beijing-based Dalian Wanda Group for $445 million to develop One Beverly Hills, the 17.5-acre, mixed-use resort that will encompass both hotel properties and is estimated for completion in 2026.

“This strong commitment from highly regarded institutions is a major milestone for our project and further underpins our belief in the bright future for the hospitality industry and global gateway cities,” Jonathan Goldstein, CEO and co-founder of Cain International, said in a statement. “We are thrilled to be working with an exceptional investor base and look forward to building on our relationship with Goldman Sachs and Aareal Capital as we progress with the delivery of the One Beverly Hills master plan.”

The 566-key Beverly Hilton was formerly known as the Conrad Hilton, which opened in 1955. It contains large event space utilized for major events, such as the Golden Globes and the Milken Institute Global Conference.

Officials for Aareal Capital and Goldman Sachs did not immediately respond for comment about the refinancing.