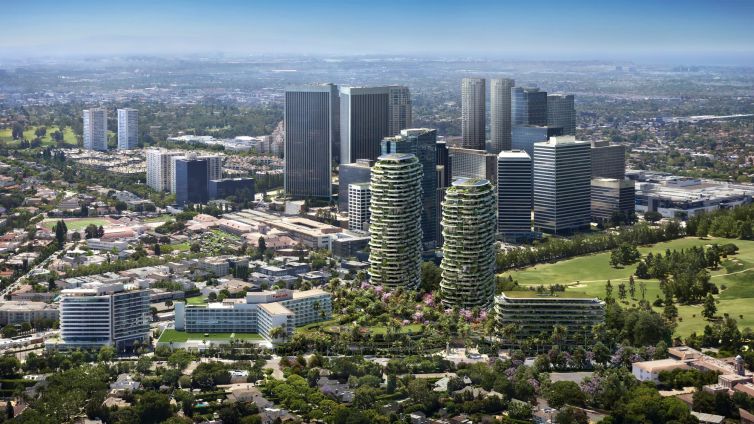 A rendering of One Beverly Hills, a mult Credit: Cain International

The hospitality sector may have suffered some bruises over the past 18 months, but a new, significant, environmentally sustainable, mixed-use development in Beverly Hills underscores the private and public sectors’ faith in its future — as well as the future of gateway cities — as the world returns to normalcy.

Alagem Capital Group and Cain International have officially kicked off their development of One Beverly Hills, a 17.5-acre, luxury mixed-use project in the heart of Beverly Hills, Calif. Sitting at the intersection of Wilshire and Santa Monica boulevards, it will encompass 1.375 million buildable square feet.

With a nod to both the old and new, One Beverly Hills will integrate the existing Beverly Hilton and Waldorf Astoria Beverly Hills hotels with three new buildings at the site: two residential towers and a new 10-story, all-suite luxury hotel that will include shared ownership condominiums.

At the very heart of the development will sit eight acres of botanical gardens, featuring more than 40 tree and 250 plant species from 13 different botanical regions of California, as well as sculptures, water features, seating areas and two miles of pathways.

Foster + Partners is leading the project’s design, while RIOS is overseeing the landscape architecture. Gensler serves as executive architect.

“The opportunity to do a development like this comes along once in a lifetime, and the impact it could have on Beverly Hills and the local environment is quite significant,” Jonathan Goldstein, CEO of Cain International, told CO.

“We are proud to be partnering with Cain International,” Beny Alagem, CEO of Alagem Capital Group, said. “Our shared commitment to building a beautiful and environmentally responsible project will resonate for generations.”

As part of the project’s master plan, the legendary Beverly Hilton hotel, at 9876 Wilshire Boulevard, will undergo a transformative redesign to reflect its new surroundings. Constructed in 1955, its redevelopment will include a new arrival drive and lobby, ballroom upgrades, a restyled pool and 36 new poolside cabanas.

One Beverly Hills’ two new residential towers will be the tallest buildings in Beverly Hills and boast unobstructed views from the Pacific Ocean to the mountains beyond the Hollywood Hills sign. Also fully integrated into the development’s green aesthetic and sustainable design, the buildings will feature greenery up to the very top of their facades, and — further softening the boundaries between the indoors and outdoors — residences will feature floor-to-ceiling windows and oversized balconies, up to 15 feet deep. Some residences will also include terrace plunge pools.

Residents will also have access to a private members club with 130,000 square feet of space over three levels comprising a state-of-the-art spa; a clubhouse with a private restaurant; wine tasting room and cellar; screening rooms; bowling alley; and a fitness area with private training rooms, an indoor lap pool, indoor basketball and pickleball courts, and an outdoor fitness facility. Unsurprisingly, the homes are already attracting interest from foreign as well as domestic investors, Goldstein said.

Discussions around the Cain-Alagem development partnership began back in 2017.

“In American terms, we hung around the hoop long enough for the acquisition opportunity to fall our way,” Goldstein said.

With COVID travel restrictions firmly in play over the past 18 months, London-based Goldstein had to see out much of the development’s planning from his office across the pond.

“It helped that I was able to visit Foster + Partners’ offices and see the stages of the schematics that they’d been working on,” he said. “And, we have a ton of confidence in our local partner [Alagem] who are delivering a world-beating design. There’s only one captain on any development and Beny has been that for us, in terms of taking it up to where we sit at this point in time. He’s done an amazing job in achieving that.”

Well-being is the central focus driving the development, with Alagem and Cain now creating one of the largest and most environmentally advanced developments in the U.S.

With the botanical gardens at its center, the project’s buildings and green space are designed to exceed California’s sustainability goals, with multiple technologies to lower emissions and energy consumption being utilized throughout One Beverly Hills.

“To give eight acres back to the city and effectively create a public park is so unusual and so exciting,” Goldstein said.

One Beverly Hills’ roots in wellness, air and light were firmly planted pre-COVID, and the pandemic only further validating the development’s design.

“He is phenomenal, and one of the greatest creators of iconic architecture,” Alagem said. “He saw our vision, and really participated in putting that vision together with this delicate, elegant architecture. When we look at its design now, we say, ‘Wow, this is incredible, given the wisdom and experience of what we just went through worldwide with COVID.’ Because, here we are with a development that encompasses technology, sustainability and healthy living.”

The project will also be 100 percent water sustainable, and use collected rainwater and recycled graywater.

Its design harkens back to Beverly Hills’ beginnings as agricultural flat land, “a green oasis that fed a growing urbanity,” Foster said. “A century later, we have seized on this inspiration to create an organic architecture that merges with landscape. The richness of Californian culture owes much to its diversity of influences, which comes together with the urgent need for sustainability — particularly conservation and recycling of water for the greenery. We welcome the opportunity to create a holistic master plan based on a green approach across the entire site.”

The new development will create a significant number of jobs in the area and generate nearly $1 billion a year in local spending. A historic development agreement with the City of Beverly Hills guarantees a $100 million public benefit fee, in addition to other revenue streams.

“The city was very welcoming, and the incredible result comes down to the fact that we received approval on every single component of our project,” Alagem told CO. “The city did not reduce the height or any of the other elements, and we received tremendous support from the community and from business leaders.”

“During the entire process, we had to work in unison with the city,” Goldstein said. “There was a need to ensure that they bought into the process and bought into our vision. But, we’ve passed that stage now, and we now have to put our heads down and get to work — because it’s a very, very large project. You’re looking at a million square feet of buildable space, platforming over the road over Merv Griffin Way, and creating an underpass between Wilshire Boulevard and Santa Monica. So, there’s a lot to do. But, we’ve got confidence in the team that we have on the ground and we’re in a good spot.”

One Beverly Hills has an estimated completion date of 2026, and the developers are currently in talks with construction lenders to take on the significant development financing, Goldstein said.

As for Alagem, there’s no place quite like home. “This project could only be built in Beverly Hills,” CEO Beny Alagem said. “It is a city I have a deep connection with and am committed to investing in.”