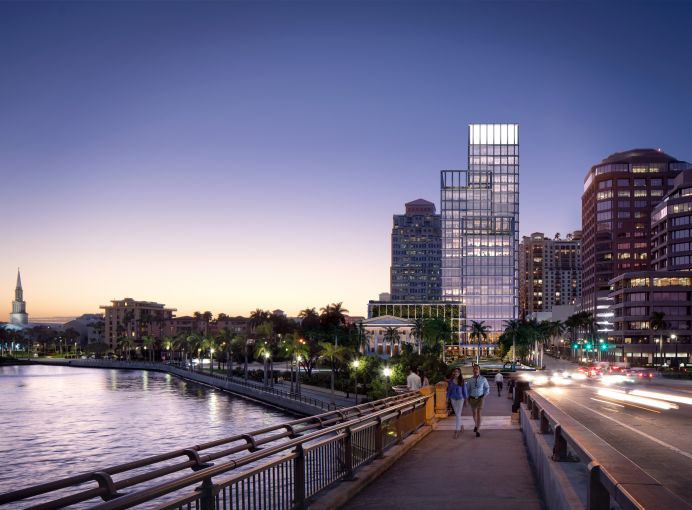 Real estate behemoth The Related Companies is once again amassing territory in Downtown West Palm Beach, and closing on a deal at least five years in the making.

The lots — located between 134 and 142 Lakeview Avenue — include a parking lot near the congregation’s Neo-Classical church and sit by the Royal Park Bridge, one of the main access points to ritzy Palm Beach, across the Intracoastal Waterway. The parish retains ownership of the church building, and the congregation was briefed about Related’s plans and approved the sale, a parishioner told Commercial Observer.

The developer plans to build a 25-story tower called One Flagler, which will hold 250,000 square feet of office space and 16,000 square feet for retail, according to Gopal Rajegowda, a partner at Related Southeast. The project is designed is by the firm of world-renowned architect David Childs and will commence construction this fall. Plans for a tower at the site go back to at least 2016, when Related first entered into contract for the site, the Palm Beach Post reported at the time.

“We remain bullish on the commercial landscape in West Palm Beach,” Rajegowda said in prepared remarks.

In West Palm Beach, Related Cos. is fast becoming the market leader in top-of-the-line, Class A office buildings. Earlier this year, the company bought Phillips Point, a two-tower office complex for $282 million; the 18-story CityPlace Tower for $175 million; and a 50 percent stake in Esperanté Corporate Center.

The firm is also developing 360 Rosemary, which will welcome financial giants Elliot Management and Point72 Asset Management as tenants.

West Palm Beach has lured Wall Street firms, thanks to its proximity to Palm Beach island, a popular holiday destination among America’s one percent, as well as Florida’s low taxes and year-round warm weather. In addition to Elliot and Point72, financial firm Millennium Management will open an office in West Palm Beach in 2022, and Goldman Sachs is said to be touring the market.