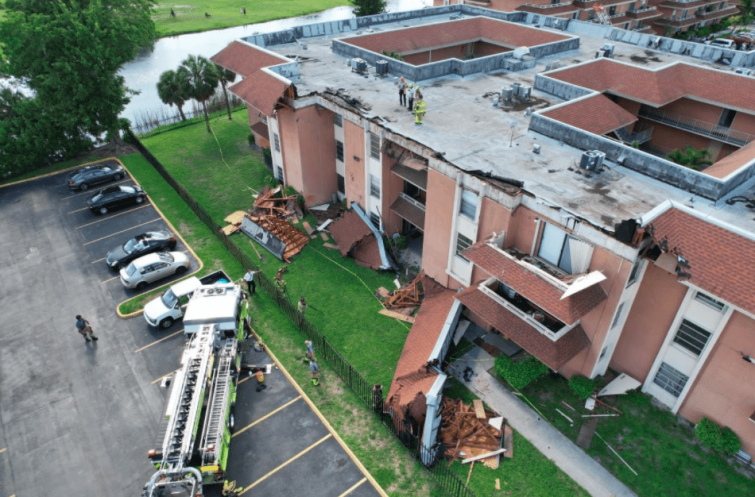 The roof of a three-story residential building in Northwest Miami partially collapsed Thursday afternoon, according to the Miami-Dade Fire Rescue Department.

No injuries or deaths have been reported, the department added, and the building, called Lakeview Gardens, was evacuated.

Pictures show one section of the roof’s outer slab fell to the ground, while the rest of the roof appears intact. The cause of the fall remains unknown.

Located at 17500 NW 68th Avenue, the Hialeah apartment building sits on the outer edge of the county, less than 10 miles from the Everglades National Park.

The building was built in 1972, property records show. While the complex was temporarily ordered to vacate in 2013 after receiving unsafe structure violations, the building had passed a mandatory safety inspection in 2015 required of structures that are 40 years old, the Miami Herald reported.

In the wake of the tragedy, Miami-Dade County Mayor Daniella Levine Cava ordered a 30-day audit of buildings that had undergone the 40-year recertification process within the county’s jurisdiction. A New York Times investigation found that 24 buildings had failed the review, and 17 of those cases had been open for more than a year.

Since the collapse, three apartment buildings in the county have been ordered to evacuate after being deemed unsafe, one as recently as July 13. That includes the Crestview Towers at 2025 NE 164th Street in North Miami Beach, where more than 300 people were evacuated; the Devon Apartments at 6881 Indian Creek Drive in Miami Beach; and the La Costa building at 5333 Collins Avenue — also in Miami Beach — where residents had previously been offered buyouts by developer Mast Capital, The Real Deal reported.