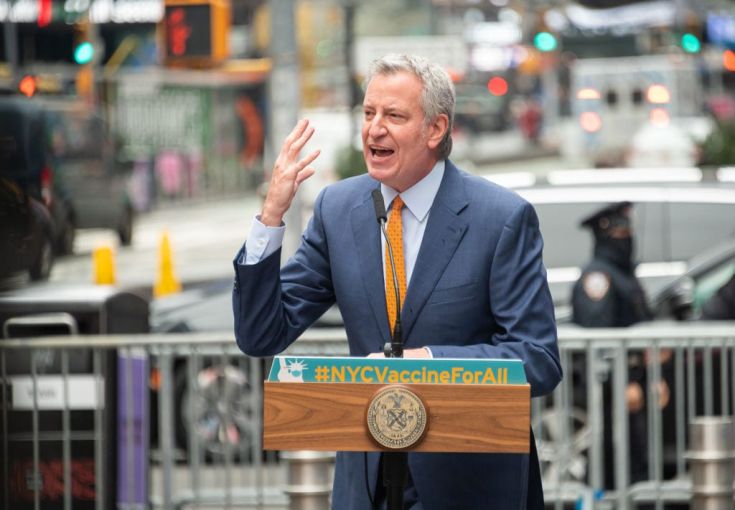 New York City plans to require all municipal workers to be vaccinated against the coronavirus by mid-September or undergo weekly testing, taking a stronger stance than some private employers that have relied on the honor system, The New York Times first reported.

The decision would impact around 340,000 city workers, including police officers and teachers, and follows a similar mandate for public health care workers that Mayor Bill de Blasio announced last week, NYT reported. The Sept. 13 deadline for municipal workers to get vaccinated coincides with the opening of New York City’s schools.

About 59 percent of city residents have received at least one dose of the vaccine and 54.2 percent are fully vaccinated, according to New York City data. That leaves 41.1 percent of the city’s population who still need to receive a dose.

Meanwhile, coronavirus cases in the city are increasing, driven by the highly contagious Delta variant and slowing vaccination rates, NBC reported. The daily average in the last seven days — 824 cases — is more than triple the daily average in late June, per NYT. Positive COVID-19 cases have nearly doubled in the state within the past week, forcing public officials to reconsider a mask mandate.

New York City is one of the largest employers in the Big Apple, and its vaccine requirement would separate it from other firms which have struggled to figure out who has or hasn’t been vaccinated.

Companies like Morgan Stanley have required that all New York employees must return to the office by September, but are on the honor system when it comes to getting vaccinated, Commercial Observer reported. At BlackRock, employees were required to self-report their vaccination status and the giant asset manager plans to transition back to in-person work from July until August.

Last week, de Blasio told Brian Lehrer on WNYC that he wanted private employers to start requiring their staff to get vaccinated or offer them incentives to do so.

“My message to the private sector is go as far as you can go right now,” de Blasio said in the press conference. “Each private-sector employer needs to do what they believe is right, but I would strongly urge a vaccination mandate whenever possible, or as close to it as possible, at minimum requiring all your employees to get vaccinated or to do weekly testing.”

Some of the city’s unions and council members were quick to react to the news. The United Federation of Teachers (UFT) praised de Blasio’s approach, saying it allowed for personal choice.

“Vaccination and testing have helped keep schools among the safest places in the city,” a UFT spokesperson said in a statement to CO. “This approach puts the emphasis on vaccination but still allows for personal choice and provides additional safeguards through regular testing. There are still many things to do before we are prepared to safely open our schools in September.”

However, AFL-CIO District Council 37, the largest public employee union in the city, challenged the requirement, saying it needed to be collectively bargained first.

“If City Hall intends to test our members weekly, they must first meet us at the table to bargain,” DC37 Executive Director Henry Garrido said in a statement. “While we encourage everyone to get vaccinated and support measures to ensure our members’ health and well-being, weekly testing is clearly subject to mandatory bargaining. New York City is a union town and that cannot be ignored.”

The NYC Police Benevolent Association and the Uniformed Firefighters Association did not immediately respond to a request for comment.

Vaccine hesitancy among police has raised public safety concerns. In May, the number of New York Police Department officers who had received one shot was 20 percent less than the percentage of city adults with at least one shot, CNN reported. But, COVID-19 has been the biggest killer of law enforcement in the United States, accounting for 145 deaths in the line of duty, per CNN.

“The Mayor’s vaccine mandate for city workers is wrong. Period,” Borelli tweeted. “Vaccines can save your life, but no one should be mandated to take a vaccine. Medical consent is still important, even in 2021.”