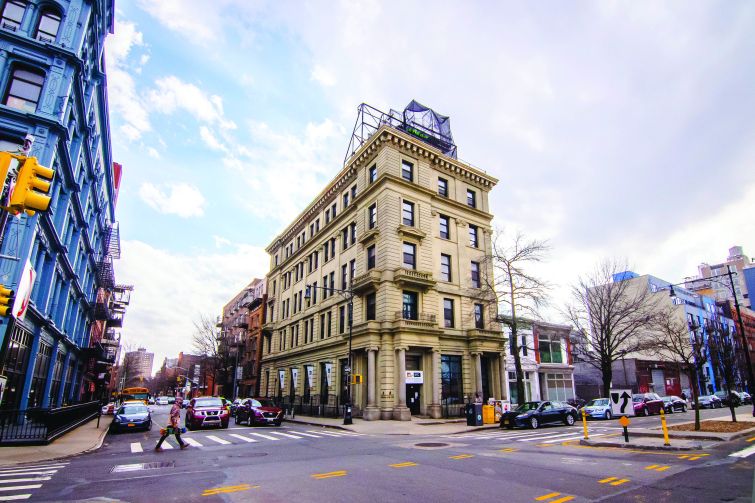 A limestone former bank building at 134 Broadway, near the Williamsburg Bridge, becomes boutique offices with a high-end restaurant on the ground floor and rooftop. Photo: Rob Texiera/Stephen B. Jacobs Group 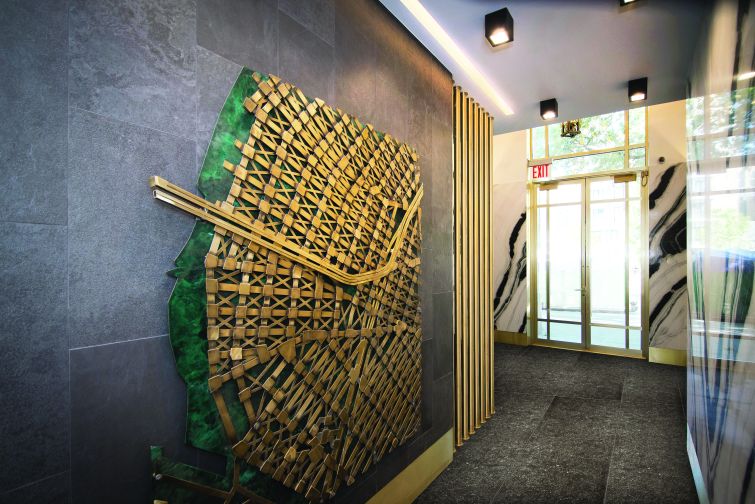 The lobby includes Williamsburg-themed brass sculptures by Kenneth Nilson, such as this wall map. Photo: Rob Texiera/Stephen B. Jacobs Group 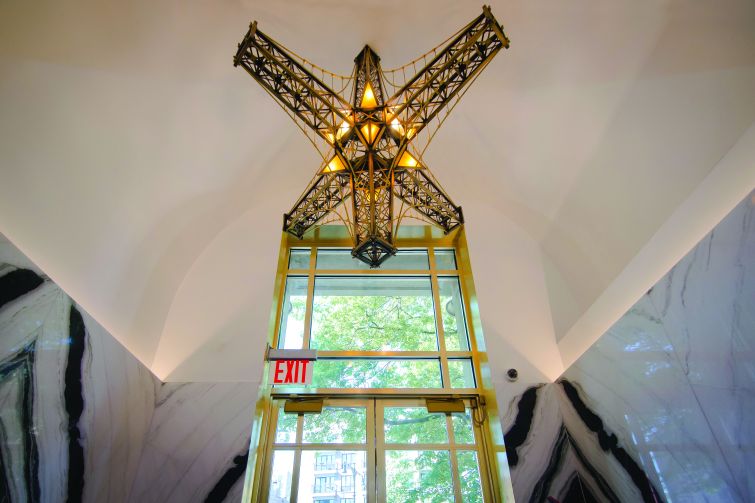 Nilson also created this chandelier for the lobby in the shape of pieces of the Williamsburg Bridge. Photo: Rob Texiera/Stephen B. Jacobs Group 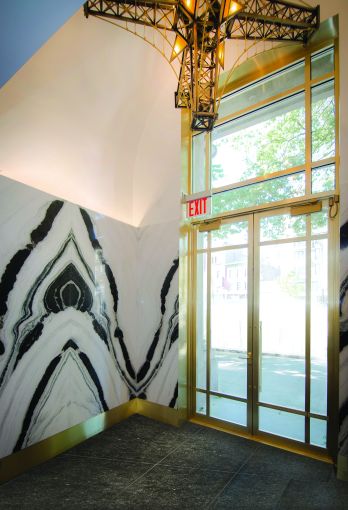 The remainder of the lobby is clad in black and white panda marble and brass. Photo: Rob Texiera/Stephen B. Jacobs Group 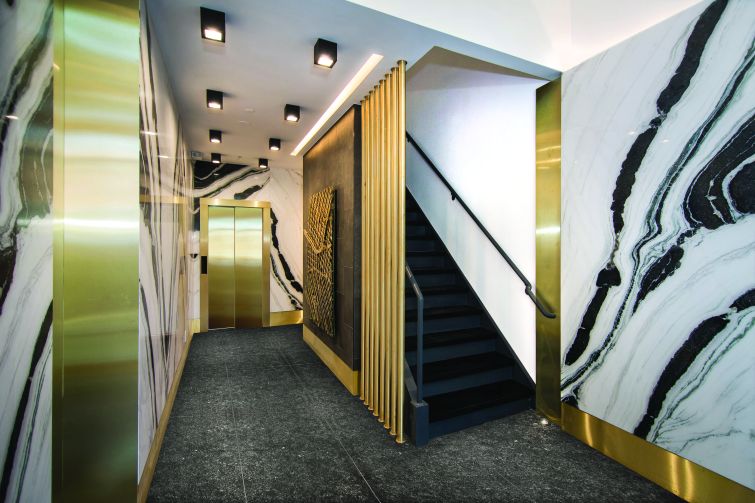 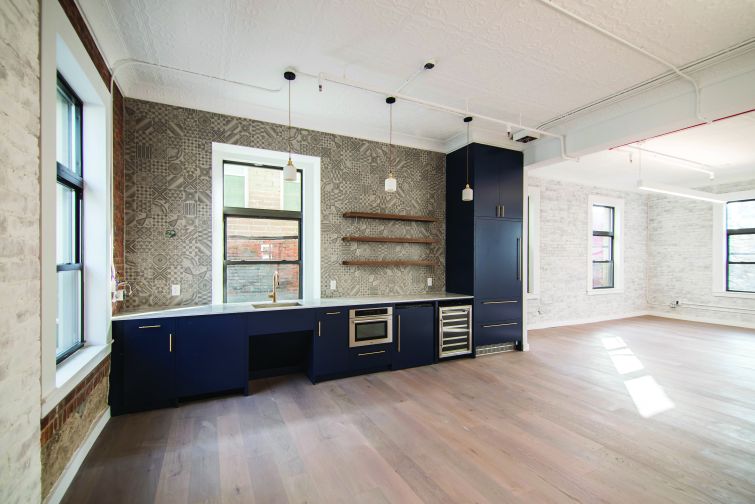 Upstairs there are newly installed tin ceilings (painted white in an effort to make them feel vintage), oak floors, and high-end kitchens and bathrooms for office tenants. Photo: Rob Texiera/Stephen B. Jacobs Group 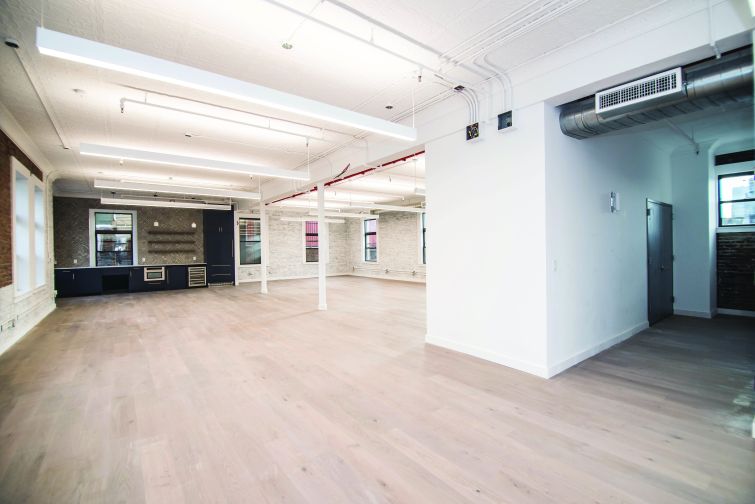 When developer Josh Caspi purchased 134 Broadway in Williamsburg, Brooklyn, three years ago, he knew he wanted to convert the limestone-clad former bank into a unique small office building. So, he commissioned a local artist to create sculptural representations of the nearby Williamsburg Bridge and the neighborhood.

The artist, Kenneth Nilson, created a brass chandelier composed of pieces of the area’s eponymous bridge, along with a brass map of South Williamsburg that now hangs along the wall in the lobby.

Caspi also wanted the lobby to have the feel of a hotel, so he and his architect, Isaac-Daniel Astrachan of Stephen B. Jacobs Group, opted to hang slabs of black-and-white “panda marble” on the walls. The marble is certainly eye-catching — and an unusual choice for a small office building lobby — with its white background and angular black patterns of stripes. The walls and floors are accented with brass panels, and the elevator doors are lined with brass, too.

On the upper floors, Caspi tore out the drop ceilings and replaced them with pressed tin ones, which were then painted white to give the offices a vintage loft look. The old brick walls were kept and painted white, and the floors were replaced with engineered oak. Stephen B. Jacobs also designed high-end restrooms and kitchens on each floor, with dark blue cabinetry, wine fridges, dishwashers and a gray tile backsplash reminiscent of patterned Portuguese tile.

The property is fully leased, and asking rents for the office space were in the $60s and $70s per square foot. The building also has all new elevator and mechanical systems, including ductless LG mini splits on each floor for the heating and cooling.

Construction began in the summer of 2018 and was finished in the summer of 2020, according to Caspi. A restaurant called Francie signed the first lease in the building in 2019, taking the entire ground-floor retail space. The 4,000-square-foot brasserie, operated by restaurateur John Winterman, is also converting the rooftop of the six-story building into a bar and member’s only lounge.

“I think we’re going to be at the center of it all in South Williamsburg,” said Caspi, who pointed to the “catering operation at the [former] Willliamsburgh Savings Bank” building down the street at 175 Broadway and the developing retail in the area.

He added that 134 Broadway was just the latest in a line of small historic buildings that he had turned into boutique office properties. His first such project was at 135 and 161 Bowery, a pair of small commercial buildings on the Lower East Side that he sold to Marx Realty for $48.5 million in 2018.

“I would create a high-end lobby experience, and a roof deck, condo-level kitchens, and high-end bathrooms with Toto washlet toilets,” Caspi explained, noting that he knew he wanted 134 Broadway because he “gravitate[s] toward buildings that had beautiful facades with some kind of sense of place and time, a historic pedigree.”