The tragic collapse of the Champlain Towers South in Surfside, Fla., is drawing more attention to an all-too-common challenge for oceanfront buildings 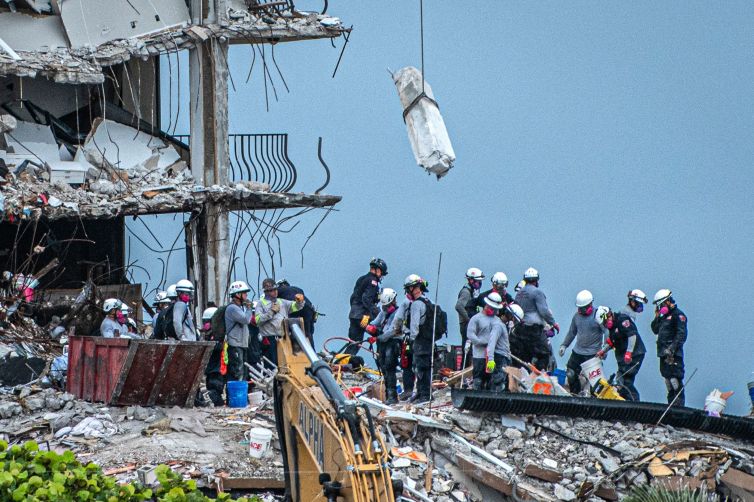 When Champlain Towers South in Surfside, Fla., collapsed on June 24, killing at least 60, the world was shocked. And, yet, the disaster might have been avoided, given the building’s warning signs: its cracked concrete, flooded basement, and sluggish condo association.

Although the exact reasons behind the deadly collapse of the 13-story condo building remain unclear, these factors are common among South Florida’s famed seaside apartments. Exposure to salt water is corrosive for buildings, and those built along the ocean are especially vulnerable. Today, climate change is only making water-related issues harder to tackle, and condo residents, who foot the bills to upgrade and restore, are often reluctant to act.

Some of these apartment buildings “are screaming to be repaired,” said Aydin Mora, president and CEO of South Florida-based Worldwide Construction & Restoration, which has worked on several seaside condos, and specializes in concrete restoration and waterproofing.

While it’s hard to know how many Florida condos are in danger, the Champlain Towers South tragedy will undoubtedly lead to stricter regulation than before on developments. Condo boards are already coming under increased pressure to undertake expensive renovations.

For the time being, at least, buyers, residents and brokers won’t overlook a building’s apparent flaws, like concrete cracks and flooding, and won’t assume it can withstand the test of time without diligent upkeep.

Despite its attractiveness to buyers and residents, the ocean poses challenges for condos.

“One is the risk of flooding from high water. The second is the risk of deterioration because of salt — that’s endemic to all the buildings along the sealine,” explained Matthys Levy, a structural engineer and co-author of the 2002 book, “Why Buildings Fall Down: How Structures Fail.”

Whether found in the air or ocean water, salt is poisonous to buildings. In a process known as spalling, salt will cause steel — a material commonly used to hold up structures — to rust. The corrosion will cause the steel to expand, creating cracks in the concrete that usually surrounds it. Proximity to the ocean puts seaside condos at great risk of flooding, allowing salty sea water to reach steel structures.

The 40-year-old Champlain Towers South was a prime example of spalling.

Years of standing water around the pool deck destroyed parts of the parking garage below, according to a 2018 report conducted by engineer Frank Morabito. The pool deck’s waterproofing laid flat on a concrete slab, preventing water from running off, a “major error” that had created cracks all over the parking garage’s roof and structural beams, Morabino flagged. Without prompt and costly repairs, “the concrete deterioration [would] expand exponentially,” the 2018 report warned.

But, water continued to flow in the moments before the deadly tragedy. Just two days prior, a contractor bidding to do a cosmetic restoration of the pool witnessed “standing water all over the parking garage.” Only hours before, a video showed gushing water pouring into the garage.

A warming planet increases the frequency of erratic weather and floods, and South Florida has been feeling those effects. The 2021 hurricane season is already beating that of 2020. Hurricane Elsa, which hit Florida last week, formed on July 1, making it the fifth earliest-named storm of any Atlantic hurricane season on record, surpassing Edouard, which hit only last year.

Sea levels are also projected to rise by two feet or more by 2060 in Miami-Dade County, according to the county’s own report. As sea levels rise, so do the tides. During the past decade, South Florida’s tides have reached new heights, in a phenomenon commonly known as “king tides”.

Oceanfront condos aren’t the only buildings affected. Water will seep through the sewage system, flooding streets and homes that face the Intracoastal Waterway. “Places that flooded once or twice a year now flood 10 or 12 times a year,” the Miami-Dade study noted.

While no oceanfront building in South Florida is immune to the dangers of flooding, new buildings are better equipped to withstand them, thanks to recent regulations. Since 1995, the Miami-Dade County government has required new construction in areas deemed at great risk of flooding by the Federal Emergency Management Agency (FEMA) to obtain a permit, showing that a development is above a certain elevation.

In practice, these structures are built one foot above FEMA’s guidelines, said Esber Andiroglu, a professor at the University of Miami’s department of civil, architectural and environmental engineering.

Research over the last four years has shown that stainless steel and a coat of zinc offer greater protection against corrosion than regular steel, said Zhong-Ren Peng, a professor and director of the University of Florida’s International Center for Adaptation Planning and Design. In the past decade, condos have begun installing pumps to absorb excess water, too, added Worldwide Construction & Restoration’s Mora.

Climate change is not the only cause of flooding. Leakage can arise from pools and pipes, and the source of Champlain Towers South’s water problems remains unclear. But, given weather’s erratic patterns and the ever-growing tides, issues related to climate change are the most challenging to treat.

“It’s pretty easy to fix a pool issue, but it’s much harder to deal with something like king tides,” said Yaniv Levi, owner of Coast to Coast General Contractors, which specializes in concrete restoration in existing South Florida buildings.

Still, none of these phenomena are new.

“The cause [of the standing water] may be due to climate change, but it’s also the property manager’s responsibility to keep the building dry!” the University of Florida’s Peng said.

The pumps’ structural beams require constant maintenance and upgrading, but residents are often reluctant to put up the cash, or even come to an agreement, over the restoration plans.

The Champlain Towers South saga is indicative of a broader pattern where necessary repairs accumulate over time. The condo board hired Morabito in 2018, three years ahead of Miami-Dade’s mandated 40-year inspection, to identify the repairs it would need to make in order to meet the requirements.

The report warned of the tower’s “major” structural problems, and urged the board to act in a “timely fashion.” Failure to do so would cause “the concrete deterioration to expand exponentially”.

Despite initially soliciting bids for the work identified in the report back in 2018, the process was delayed. The board opted instead to do further reviews to wrap all the repairs into one big job, according to a letter sent to residents in April 2021. By then, the problems had progressed and repairs would amount to upward of $15 million. The condo board was in the process of soliciting bids for the job when the building collapsed.

Champlain Towers South is far from alone. Condo boards are notorious for fighting over, and ultimately delaying, construction work because of the cost. They also rarely have enough capital saved up, requiring residents to pay exorbitant special assessment fees to fund the works. Champlain’s refurbishments were scheduled to average $110,000 per unit.

The renovations are almost always inconvenient. “It’s never a good time to come and rip up your pool deck, your parking garage,” said Coast to Coast’s Levi.

The collapse of Champlain Towers South has spooked just about everyone in South Florida. Now, government officials and the real estate industry are looking for ways to prevent another catastrophe.

While the Miami-Dade County government has yet to announce reforms of its mandatory safety inspections, many suspect they will become more frequent and thorough. Current county regulations require buildings to pass a safety inspection 40 years after their construction, which are followed by ones every 10 years.

Although Champlain Towers South, built in 1981, was in the midst of undergoing its inspection, given the amount of repair needed, it was unlikely the restorations would have been completed in time to pass the inspection.

Some are already calling to move the recertification deadline up to 30 years, as well as to increase enforcement of the existing rules, which had been lacking and can vary in each jurisdiction, The New York Times found.

The day after Champlain Towers South’s collapse, Miami-Dade County Mayor Daniella Levine Cava ordered a 30-day audit of buildings that had undergone the 40-year recertification process within the county’s jurisdiction. The review found that 24 buildings had failed the review, and 17 of those cases had been open for more than a year.

In Bay Harbor Islands, a wealthy enclave just west of Surfside, only one out of 14 buildings had completed the 40-year recertification process that was due in 2020. Six of the property owners never responded to the city’s notice.

Surrounding coastal cities, including Sunny Isles and Miami Beach, followed Miami-Dade’s lead by launching similar reviews. Even Sunrise, a town that’s located inland near the Everglades National Park, is reviewing all buildings that underwent the 40-year inspection in the past year.

“As a mayor of a town that’s far west, I’m not prepared to ignore what happened,” said Sunrise Mayor Mike Ryan.

Beyond inspections, condo boards may come in for reforms. Critics say they are too passive. Mayor Ryan endorses creating a federal loan program for residential buildings to encourage boards to habitually renovate their properties.

Before the tragedy, Miami’s condo market soared, driven, in large part, by Northerners relocating down south to enjoy the state’s low-income taxes and warm weather.

In Miami-Dade County, average sales prices for condos jumped to $701,104 within the last year, increasing by $283,360 between May 2021 and a year prior, according to data compiled by ONE Sotheby’s International Realty. “March, April, and May were the three highest monthly sales totals since at least 2015,” the report noted.

Even Champlain Towers South, despite the dire state of the building, was in high demand. In the first six months of 2021, eight of its apartments were sold. That’s more than in all of either 2020 or 2019, respectively, according to property records and MLS data. In 2021, all of the sold units, except for one, doubled their last purchase price.

Now, residential brokers are seeing the market turn. Broker Luciana Bacolla, who sold a unit at Champlain Towers South for $750,000 only a month before it fell, said she was struggling to sell a nearby oceanfront apartment at 9499 Collins Avenue. Following Champlain’s catastrophe, potential buyers canceled showings.

It’s too soon to say whether Champlain Towers South’s collapse is a momentary blip in an otherwise sizzling market, or if it’s the beginning of a lasting downturn. What is for sure, for the time being, at least: Owners, buyers and brokers won’t look past a building’s cracks and standing water, and assume it’s secure like before.

“You never think something like this can happen here in this country with all the rules,” said Bacolla, who’s originally from Argentina.