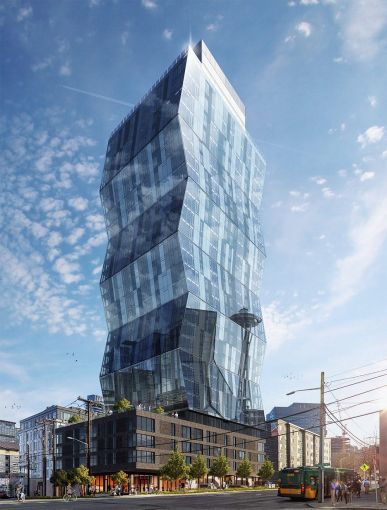 “Seattle is benefiting greatly from regional job creation, and South Lake Union is still a prime location for new developments,” Karson said. “Strong developers like Gemdale are getting great attention from debt and equity investors interested in high-quality projects.”

The new tower, located at 222 Dexter Avenue North and designed by architecture firm Hewitt, will include 338 multifamily units and unobstructed water views. The project will also feature 2,260 square feet of ground-floor retail and a top-notch amenity package.

Construction on the tower — which features a striking, angled glass facade — is expected to wrap in October 2023.

Skyglass Tower is Gemdale’s first high-rise apartment project and first development in Seattle. The Pasadena, Calif.-headquartered developer announced the acquisition of the building’s 18,000-square-foot site — at the heart of Seattle’s tech and life sciences hub — in July 2019.

The tower meets growing demand for housing in the South Lake Union area following the growth of such companies as Amazon, Google, Facebook and Apple. It also sits close to Seattle Center, the area that’s home to the Space Needle and the fully renovated Climate Pledge sports arena — which will soon house the Seattle Kraken ice hockey team, which begins its inaugural season this fall.

“Cushman & Wakefield offers considerable skill and valued experience to our clients in the Puget Sound, and we continue actively growing in the region,” said Alison Beddard, managing principal for Washington operations at C&W. “We are proud to be involved in developments like Skyglass Tower that deliver new, high-quality product with lasting impact to our region.”

At the time the project was announced in 2019, Gemdale USA Chairman Jason Zhu said: “We are excited to enter the Seattle market and look forward to developing our first project in this distinctive location. South Lake Union is one of the country’s most dynamic submarkets, and we look forward to adding this world-class project to the Seattle skyline.”

The Seattle market continues to attract a deluge of investor attention, taking Manhattan’s crown for foreign investment in U.S. commercial real estate in May, as first reported by The Seattle Times. It also recently added an East Coast owner to its roster: Boston Properties announced it is acquiring Safeco Plaza in a $465 million deal as part of a strategy to establish a footprint in the Seattle market.