Allen Weisselberg faces 15 years in prison on the most serious charge; the former president's company faces an uncertain future 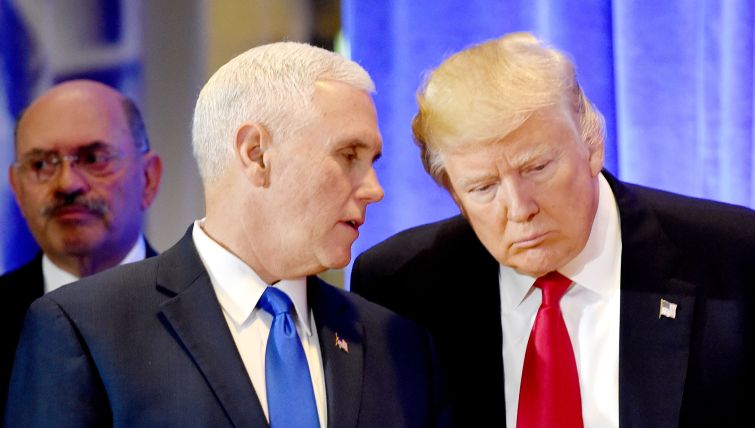 Allen Weisselberg, left, with Mike Pence and Donald Trump in early 2017, shortly before their inauguration as U.S. vice president and president. TIMOTHY A. CLARY/AFP via Getty Images

A Manhattan grand jury has indicted the Trump Organization and its chief financial officer, Allen Weisselberg, for allegedly evading taxes on a total of $1.76 million in perks from the company of the former U.S. president that included leased Mercedes-Benzes for Weisselberg and his wife, a luxury Upper West Side apartment, and private school tuition for relatives.

Weisselberg turned himself in at a Lower Manhattan courthouse early Thursday morning, hours before the 15-count indictment against him was unsealed. He surrendered his passport and was released under his own recognizance, according to reports. The indictment also included 10 counts against the Trump Organization and the Trump Payroll Corp., which handles compensation for the company; both are based in Trump Tower at 725 Fifth Avenue.

Donald Trump and other executives at the Trump Organization, including his eldest children, were not indicted and have not been accused individually of wrongdoing.

Still, the criminal charges cannot do anything but hurt the former president’s business. The Trump Organization is likely to find it that much more difficult to find lenders, just as hundreds of millions in loans come due, and to find real estate partners for future developments.

The indictment also comes after a particularly rough few years for the company and its founder, some of it self-inflicted. After his supporters stormed the U.S. Capitol to try to overturn the 2020 election, Deutsche Bank, Trump’s largest conventional lender, announced it would no longer do business with him. Trump owes Deutsche $340 million, too — some of it personally guaranteed and all of it due within the next few years.

Signature Bank also dropped Trump not only as a business client, but also closed his personal accounts.

New York City itself moved after the Jan. 6 insurrection to get out of its contracts with Trump, including at the Wollman and Lasker ice-skating rinks in Central Park. And the company’s business, like a lot of firms tied to hospitality, sank like a stone during the pandemic, with revenues declining nearly 38 percent in 2020, to $278 million, according to financial disclosures at the time.

What’s more, several companies, including such real estate brokerages as Cushman & Wakefield and JLL as well as service vendors, followed the banks’ lead and dropped Trump as a client, either entirely or on specific projects. Even the literal “Trump” name is disappearing from properties in Florida and New York.

The charges from a grand jury that Manhattan District Attorney Cyrus Vance convened relate to perks that the Trump Organization allegedly funneled to Weisselberg from March 2005 to June 2021. Such sweeteners are taxable, and the indictment claims Weisselberg evaded approximately $556,385 in federal taxes, $106,568 in state taxes, and approximately $238,159 in city ones. The indictment also accuses Weisselberg of claiming and receiving around $94,902 in federal tax refunds and another approximately $38,222 in state tax refunds, none of which he was entitled to.

What’s more, Weisselberg’s legal woes could be just beginning. He pleaded not guilty on Thursday (as did lawyers for the Trump Organization) and has not commented publicly on the allegations.

But the indictment is said to be a way to pressure Weisselberg to cooperate with Vance and other prosecutors in pursuing further charges against the Trump Organization and other executives there. The most severe count against Weisselberg of grand larceny in the second degree is a Class C felony in New York state, and carries up to 15 years in prison; other counts also each carry years-long prison sentences. If prosecutors think they can map a larger alleged scheme to arrange such fringe benefits to employees such as Weisselberg, then more serious criminal charges might be brought.

New York Attorney General Letitia James, whose office is working with Vance’s, hinted at such a strategy by prosecutors in a statement after the indictment was unsealed:

“Today is an important marker in the ongoing criminal investigation of the Trump Organization and its CFO, Allen Weisselberg. In the indictment, we allege, among other things, financial wrongdoing whereby the Trump Organization engaged in a scheme with Mr. Weisselberg to avoid paying taxes on certain compensation. This investigation will continue, and we will follow the facts and the law wherever they may lead.”

NOTE: This article has been updated to reflect information from the indictment.