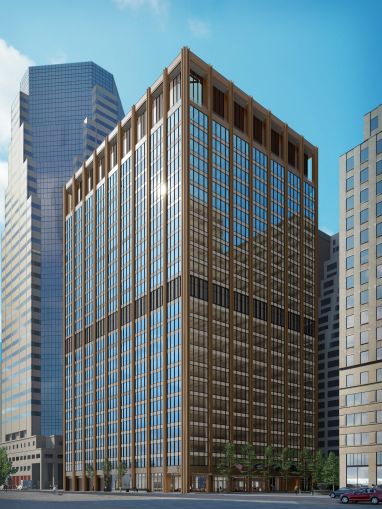 The market is back, baby. And one of the largest office loans in New York City since COVID-19 hit U.S. shores has closed.

A lending consortium that included SKW Funding, PIMCO, Oaktree Capital and Bain Capital provided the financing, according to several sources familiar with the transaction. SKW Funding is led by Danny Wrublin, Ayush Kapahi, and Matt Contreras.

The joint venture will use the financing package to reposition and redevelop the asset into a Class A office in the heart of the Financial District, with views of the Manhattan and Brooklyn skyline, New York Harbor and the East River.

“The exceptional track record, experience, and financial wherewithal of Nightingale and WCP collectively were instrumental in this innovative financing during the most challenging financing environments in history,” Stolly said.

“111 Wall’s attractive basis, coupled with an exceptional business plan and lead by best-in-class, institutional joint-venture partners allowed lenders to be comfortable with a large office redevelopment on the heels of COVID,” Roeschlaub added.

As CO previously reported, Nightingale and WCP acquired the property’s ground lease in January 2020. As the pandemic bore down and ravaged New York City, the partnership was unwavering, collapsing the asset’s fee and leasehold interest, creating fee simple ownership. Fast forward to today, and the partnership has closed one of the biggest office financings of the past 15 months.

Occupying an entire city block between Wall Street and Gouverneur Lane, 111 Wall Street encompasses 1.2 million square feet across 25 stories. It sits adjacent to Wall Street/Pier 11, as well as numerous subway lines and the Wall Street Heliport. The waterfront property was once fully leased to Citigroup and known as the Citibank Building.

Nightingale and WCP are undertaking a large renovation of the property spearheaded by Studios Architecture, which will include a new curtain wall; new floor-to-ceiling windows; a renovated lobby; touchless and smart-building technology; and a white-glove amenity program which includes 40,000 square feet of amenities, including a 125-seat conference center, event space, a bike and scooter charging room, and a fitness center known as 111 WELL.

Tenant amenities — designed by URBN Playground — will be available on the tenant’s smartphones via an 111 Wall Street app.

111 Wall is not Nightingale and WCP first venture together; the two have joint interests in several properties and development projects totaling over five million square feet.

“The hallmark financing of 111 Wall Street enables the joint-venture partners to capitalize on the recovery and re-emergence of New York City as the market comes roaring back, specifically for best-in-class and bespoke office product,” Stolly noted.

“There is something special about being the first C-PACE transaction completed in the Big Apple,”  Mansoor Ghori, CEO of Petros PACE Finance said in an announcement on June 16. “The fact that the first transaction shattered the record for the largest C-PACE transaction ever closed is proof of the magnitude of the City’s potential for C-PACE, and the wisdom of the Mayor and City’s leadership on climate change.  We thank both the Mayor’s Office, particularly the Office of Climate & Sustainability for their support of this project and NYCEEC for their amazing partnership in this process to open this market.”