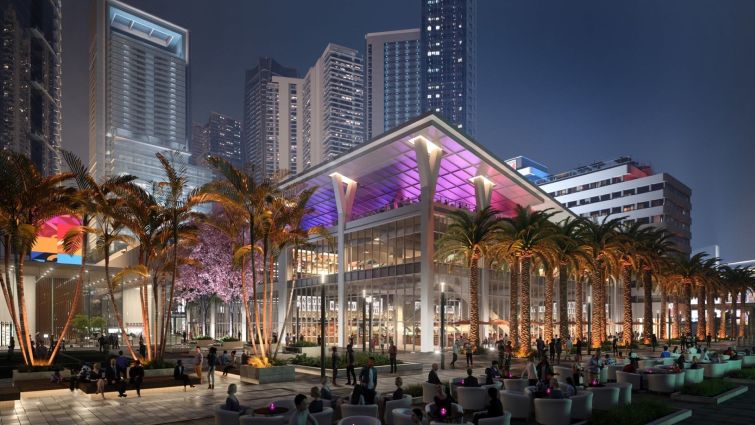 Miami Worldcenter, one of the largest development projects in the U.S., inked its first restaurant leases between May and June, totaling 30,400 square feet, with former Michelin-starred chef Danny Grant and James Beard nominee Michael Beltran.

Grant, who’s based in Chicago, will open his famed steakhouse, Maple & Ash, and Italian eatery Etta at Block H – a retail building located between 7th Street and 1st Avenue Northeast. The steakhouse will occupy 15,000 square feet, and its counterpart will take over 11,000 square feet.

Miami chef Michael Beltran will also open two locations: Laurel — a 2,800-square-foot, Cuban-influenced bistro — and El Vecino, a 1,600-square-foot cigar bar. Both will be situated on the ground floor of Caoba, a condo building adjacent to Block H.

The retail asking rent at the development is around $100 per square foot, Michael Comras of The Comras Company told Commercial Observer. All restaurants are slated to open by the fourth quarter of 2022, the broker added.

The Comras firm represented both the landlord — master developer Miami Worldcenter Associates, which is led by managing partner Nitin Motwani and the L.A.-based CIM Group — and Grant. Representatives for Beltran’s Ariete Hospitality Group could not be reached for comment.

Miami Worldcenter “is the hole in the doughnut,” Comras said, referring to the development’s prime location.

Situated between the Brickell neighborhood and the MacArthur Causeway, the $4 billion project is meant to revitalize a sleepy section of the city’s downtown area. Occupying 10 city blocks, the 27-acre comes second only to Manhattan’s Hudson Yards complex in terms of size for planned or recently opened real estate developments.

Much of the site remains under construction. Only two residential buildings have been completed: the 43-story Caoba and the 60-story Paramount Miami Worldcenter condominium. And only two more are expected to open later this year: ZOM Living’s 43-story Bezel at Miami Worldcenter residential tower and the 351-room citizenM hotel.