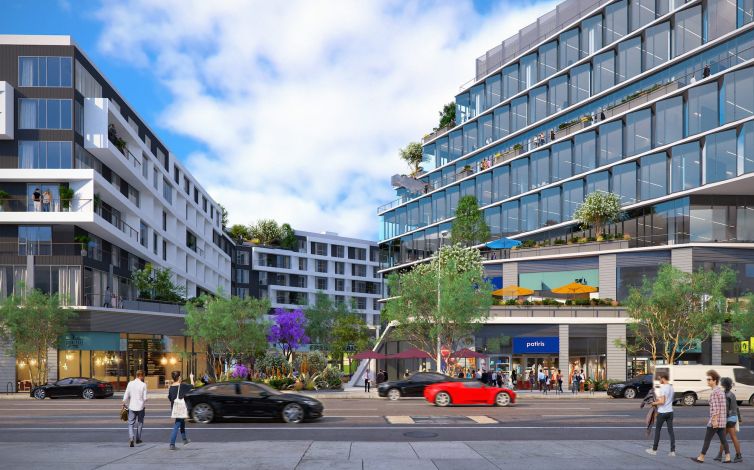 Gelson’s will occupy 36,000 square feet on the plaza level of the seven-story residential building. Gelson’s is anticipated to open in early 2023. gcornfieldcommercialobservercom

Gelson’s, a high-end supermarket chain, has signed a long-term lease with Hines to be the retail anchor at the big West Edge mixed-use development on L.A.’s Westside.

The supermarket will open in early 2023 with 36,000 square feet on the plaza level of the seven-story residential building, Hines announced.

Crews started constructing the mixed-use development at 12101 West Olympic Boulevard about a year and a half ago. It calls for 600 multifamily units; 200,000 square feet of creative office space; eight restaurants; and a half-acre, open-air plaza with al fresco dining. The 4.8-acre site is the former home of the Martin Cadillac dealership, and sits at the prominent corner of Bundy Drive and Olympic Boulevard, less than one block from the Expo/Bundy Metro station. The site is within half a mile of the 10 freeway and within one mile of the 405 freeway.

Grocery stores have emerged from the pandemic as one of the few safe havens among retail investors. Last month, CGI Strategies and Megdal Investments acquired a 24,000-square-foot retail property in L.A.’s Los Feliz neighborhood, which the venture is redeveloping into an organic grocery operated by Lazy Acres Market. Also last month, LoanCore Capital provided a five-year, floating-rate loan for $63.78 million for the 14.5-acre Midtown Shopping Center, anchored by a major regional grocery store.

West L.A. is home to some of the county’s most noteworthy conversion projects, too. Less than two miles from West Edge, two massive, modern office redevelopments are set to rise at the former Westside Pavilion mall. One by Hudson Pacific Properties and Macerich was pre-leased to Google, with GPI Companies building 230,000 square feet next door.