Hines is leading the massive West Edge redevelopment, which will bring 200,000 square feet of creative office space and 600 luxury apartment units to the Westside. 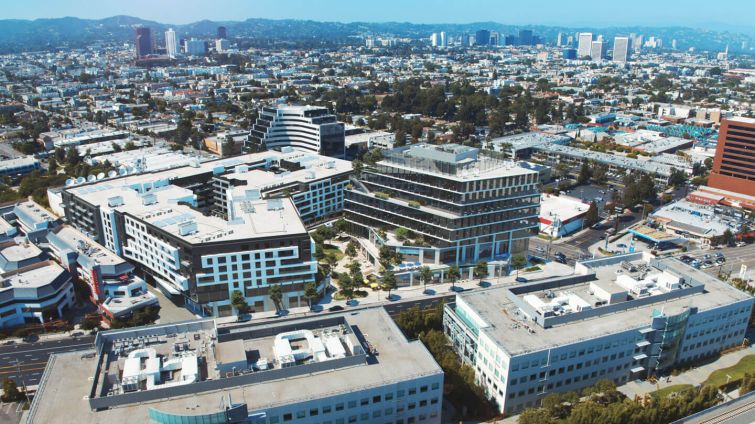 The project, at 12101 West Olympic Boulevard, will feature 200,000 square feet of creative office space, 600 luxury apartment units, a 36,000-square-foot grocery store, eight restaurants, and retail and fitness space. Gensler, Togawa Smith Martin, and RCH Studios designed the project, which is expected to attract media and technology firms. The project is expected to open in 2022.

The development is located at the intersection of Bundy Drive and Olympic Boulevard, less than one block from the Expo/Bundy Metro station and a half mile from the 10 Freeway. The 4.8-acre site was previously home to Martin Cadillac dealership and has been owned for decades by the Martin family, which runs Philena Properties and spent seven years securing entitlements.

West L.A. is currently undergoing a significant transformation with some of the county’s most noteworthy conversion projects. Less than two miles away, two massive modern office redevelopments are set to rise at the former Westside Pavilion mall. Hudson Pacific Properties and Macerich will bring 584,000 square feet of new office space — which was pre-leased to Google a year ago — and Goldstein Planting Investments Companies is currently building 230,000 square feet next door.

Industry experts and analysts have told Commercial Observer that the creative office sector in L.A. will see continued growth this year, although it will be modest in relation to the past few years. Savills’ fourth quarter report for 2019 showed the Westside continuing to tighten. Westside’s vacancy rate is 14.1 percent, compared to an overall average of 18.1 percent, and options for Class A space on the Westside remain limited for tenants looking for large blocks.

Hines, along with Commingled Pension Trust Fund, also owns the 2.4-million-square-foot Century Plaza Towers in nearby Century City. The company has approximately $124.3 billion of assets and 148 developments underway around the world.