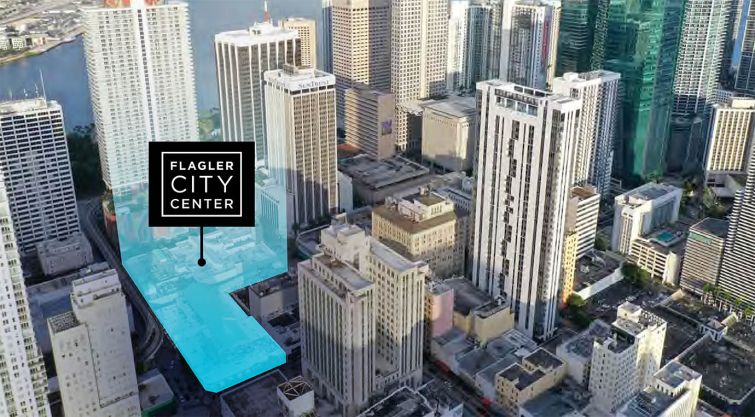 The site, at 251 Flagler Street, comes with massive redevelopment potential, opening up the path for a buyer to potentially construct a 2.6 million-square-foot project.

B6 Real Estate Advisors is marketing the sale, with Steven Sperandio and John Barney leading the assignment, B6 officials confirmed. The site — one of the few large, contiguous development sites available in Miami — is expected to sell for between $80 million and $90 million, sources said, and presents the winning bidder with a unique opportunity to add a roughly $1 billion Miami development to their portfolio.

The sale process follows a recent refinancing on the property in order to assist in the transfer of ownership from current owner to the eventual buyer, with Thorofare Capital providing the 12-month, $14.3 million bridge loan. When the refinancing closed last week, the sale was launched and is now off to the races.

The lot measures 109,771 square feet and currently houses a three-story, 164,000-square-foot shopping center that’s anchored by a Marshalls store. All leases currently in place have a 180-day demolition clause, meaning that when the property is sold, the landlord has the right to serve the tenant with a notice to vacate the space within the aforementioned time period.

The property’s zoning, however, allows for 1,000 housing units per acre, up to 80 stories high.

Recent redevelopment plans already exist for Flagler City Center, designed by Asymptote Architecture and approved by the Federal Aviation Administration in 2016. Those plans called for a 2.4 million-square-foot mixed-use project, featuring a two-tower structure on top of a four-story retail podium. One tower would reach 1,001 feet above ground, and the second 837 feet. The east tower’s plans would include a hotel component and rental units, while the west tower would comprise 600 residential units. Planned amenities would include a rooftop pool and gardens, health club and spa, restaurants and lounges.

The site is in good company alongside the Flagler Street redesign project, backed by developer Moishe Mana. According to The Real Deal, the project will include widened sidewalks, additional valet parking spaces and larger shade areas. Mana owns several buildings on and near Flagler Street.

Prior to Thorofare Capital providing the new bridge financing, the property at 251 Flagler Street was the subject of a COVID-aggravated note sale. U.S. Century Bank held the debt for several years before the note was sold to Safe Harbor Commercial Capital. Ownership chose to refinance the debt, and Thorofare stepped in to quickly close the loan and allow a clear path to a sale.

“As we continue to expand our direct lending focus on attractive markets in the Southeast, we are pleased to have funded this low-leverage interim loan for this well-located site in the heart of Downtown Miami,” Felix Gutnikov, head of originations at Thorofare Capital, said. “With close proximity to mass transit and transportation arteries, this property represents one of the largest available redevelopment sites in Downtown Miami and can accommodate a large-scale mixed-use development.”

The site was previously up for sale in 2018 with a $125 million price tag, and was marketed by Marcus & Millichap at the time. Today, the B6 team is running the show, and the post-COVID movement of New York developers to the Miami market means that the transaction is sure to pique significant interest.

Miami has attracted a tidal wave of capital as well as a meteoric influx of new residents during COVID — including several of New York’s real estate heavy hitters. This sale offers the potential for a “New York project, but in Miami,” Sperandio said, adding that, “Miami has become the sixth borough.”

With Paul Massey‘s B6 being a Manhattan-based brokerage, with access to New York capital sources, the firm was an ideal fit to market the sale, Sperandio said.