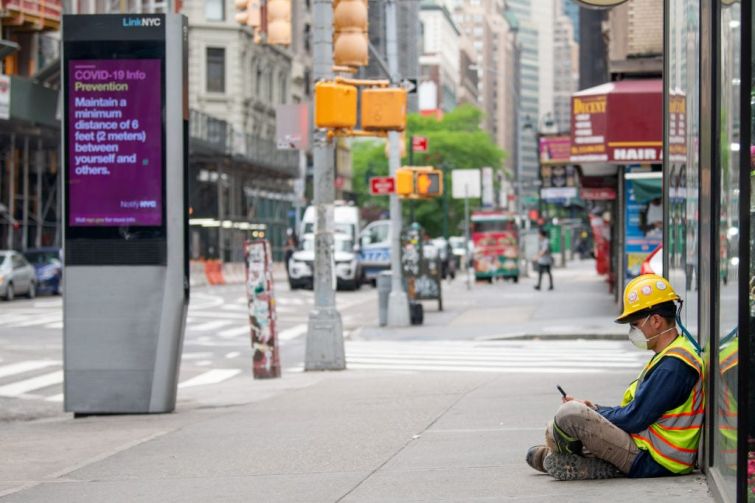 A construction worker wearing a mask sits on the street near a "COVID-19 info" digital display on May 28, 2020 in New York City. Photo: Alexi Rosenfeld/Getty Images

New York City saw the smallest number of square footage for new construction in a decade, posing an obstacle to the city’s recovery from the coronavirus pandemic, according to a new report from the Real Estate Board of New York (REBNY).

The 98 permit fillings for new multifamily buildings also represented its lowest point since the third quarter of 2011, according to the report.

Rabina Properties’ 452,134-square-foot, mixed-use building at 520 Fifth Avenue, and Naftali Group’s 486,416-square-foot Williamsburg, Brooklyn, towers at 480 and 490 Kent Avenue were the only projects filed in the first quarter of 2021 above 300,000 square feet. The two projects encompassed nearly 17 percent of total square footage filed.

Firms filed projects for a total of 3,336 units of multifamily dwellings in the first quarter of 2021, a 54.3% decrease in units from the fourth quarter of 2020, with the largest number in the Bronx.

Queens saw the highest number of filings of all five boroughs at 129 — a 38.71 increase from last year. Manhattan had the smallest amount of filings at 22, despite increasing from the fourth quarter of 2020 by nearly 5 percent. But projects in Manhattan still represented the largest square footage in the city.

REBNY said the shrunken footprint of new construction this year could hinder the city’s recovery, which is expected to be “slow but fragile,” from the pandemic. It used its report to support President Joseph Biden’s infrastructure plan, which would pump $2 trillion into infrastructure projects nationwide, spanning from rebuilding roads and bridges to eliminating lead pipes and shifting to clean energy.

“Congress must act swiftly to pass President Biden’s infrastructure plan, which will play a critical role in advancing a strong economic recovery for New York and creating thousands of good jobs,” James Whelan, president of REBNY, said in a statement. “We applaud [Senate] Majority Leader Chuck Schumer for embracing this much-needed plan and leading the fight for its passage.”

Gary LaBarbera, who was recently elected to head the state and city chapters of the Building and Construction Trades Council of Greater New York, also threw his support behind Biden’s plan.

“It’s clear that investment in large-scale infrastructure and public works projects is needed now more than ever to jumpstart the city’s economic recovery,” LaBarbera said in a statement. “Fortunately, there is a thoughtful, timely, and robust plan introduced by the Biden administration that invests in New York and in our working people that Congress must pass immediately.”