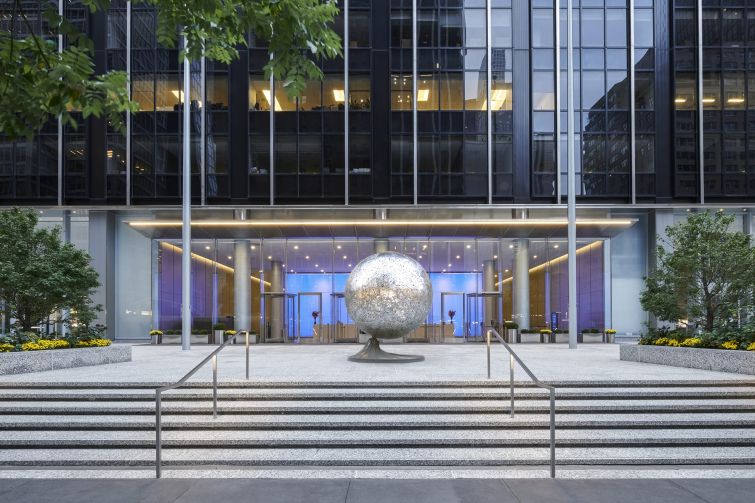 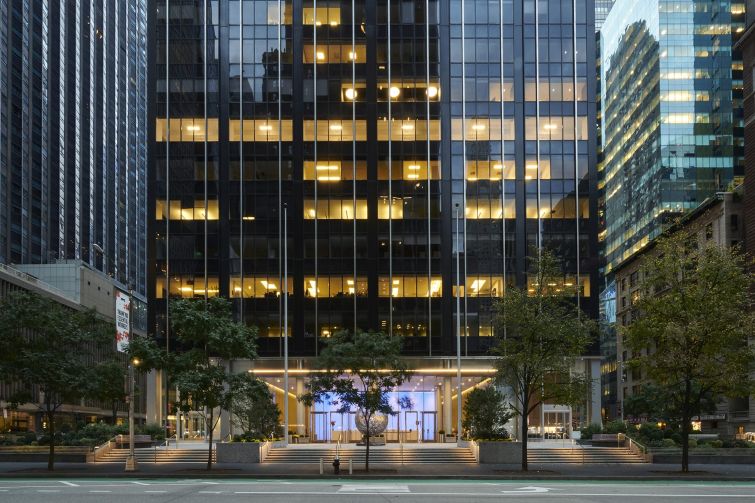 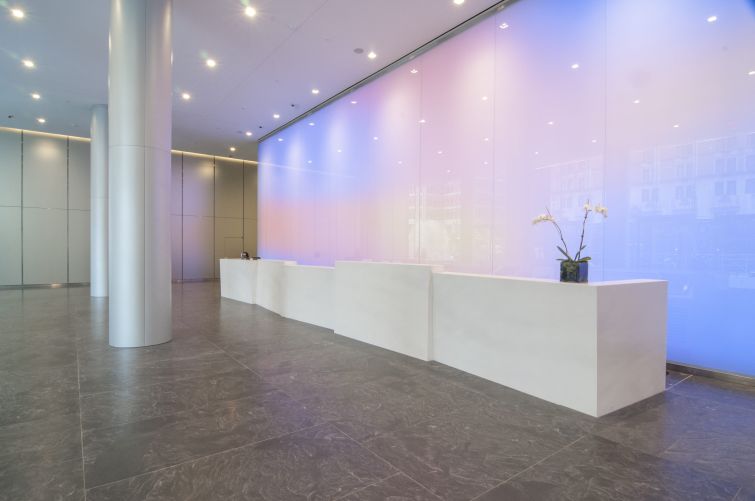 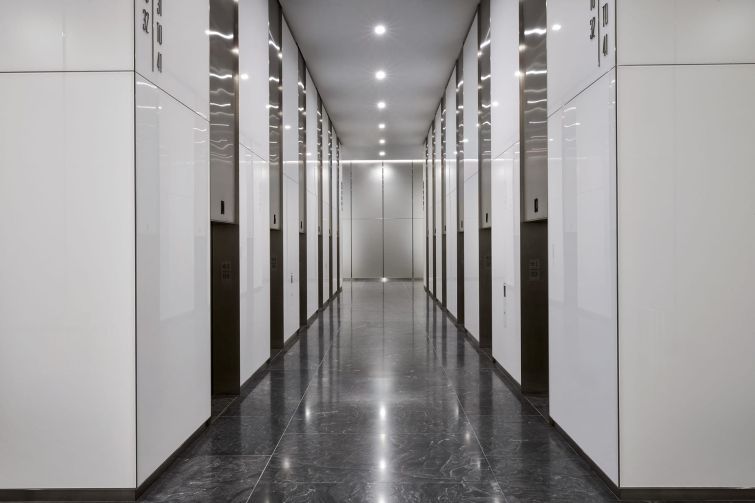 In addition to a renovation of the elevator lobby, the elevator systems were upgraded during the pandemic to destination dispatch. Image: Fisher Brothers 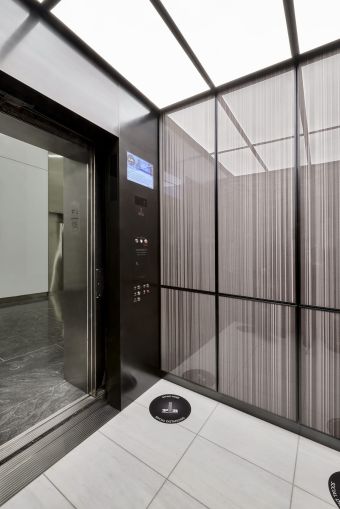 The elevator cabs were redone in lighter colors and panelling as well. Image: Fisher Brothers 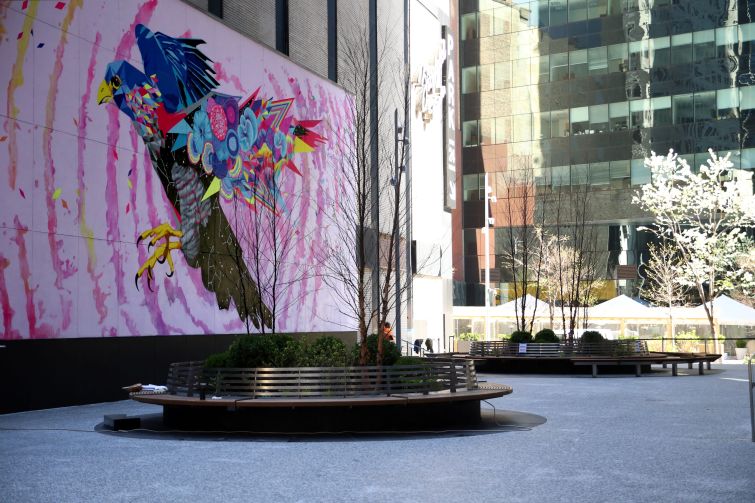 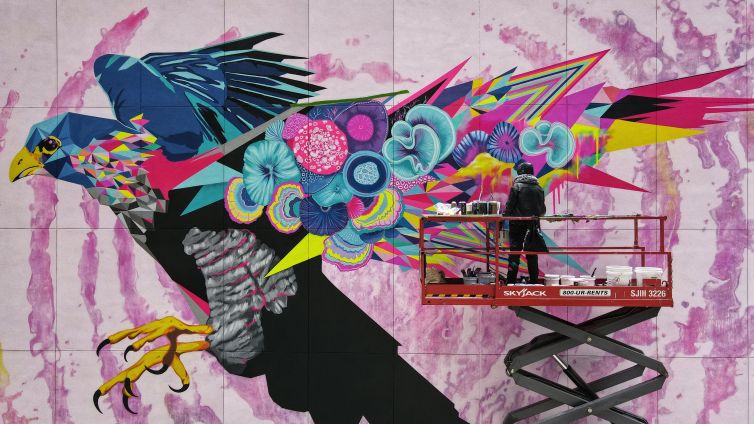 Fisher Brothers is also working on a virtual reality experience mobile app that visitors will be able to use to see the mural come alive. Image: Ben Lau
Previous Next

Fisher Brothers’ long-in-the-works plan to revamp its 1960s office tower at 1345 Avenue of the Americas has finally come to fruition, along with improvements to public spaces around the building and an adjacent pocket park.

The landlord recently finished $120 million worth of renovations to the 50-story, 2 million-square-foot office tower that it started in 2017. The Emery Roth & Sons-designed skyscraper has the dark, imposing glass typical of late-1960s modernist office buildings, along with a large, sparsely planted, street-level plaza that featured a fountain and two starburst-shaped bronze sculptures.

With the help of Skidmore, Owings & Merrill, Fisher Brothers redesigned the public plaza to add more seating, larger planters with flowers and trees, updated stairways and a brighter lighting scheme. The starbursts have been replaced with a new, stainless-steel globe sculpture by artist Michael Christian, inscribed with a map of 15 New York City neighborhoods.

New seating and topiaries were added to the sidewalks on either side of the building, which were previously barren. The building, which occupies an entire blockfront on Avenue of the Americas, also features a small, privately owned public space — appropriately dubbed “Fisher Park” — that runs through the block between West 54th and West 55th streets.

The park also got new trees and new circular wooden benches, along with a massive, colorful mural of a bird by street artist Vexta. The Australian muralist teamed with augmented reality art studio Heavy to create a mobile app that allows viewers to see moving pieces of the mural when they hold up their phone to the wall.

The lobby, which was completed back in 2018, includes floor-to-ceiling glass panels along the entire ground floor. Many architectural features that were previously black were updated with shiny, new metallic cladding, including the building’s entrance portal and large lobby columns. The dark reception desk was retrofitted to resemble white marble and is backed by a series of color-changing LED panels. The elevator lobby was reclad in white and stainless steel, too, to match the main entrance.

The renovation also added a 15,000-square-foot amenity center, designed by Rockwell Group, in formerly unused basement space. Half of the amenity area is devoted to conference rooms that can accommodate up to 200 people. The remainder includes a cafe that offers catering services, a lounge with a 400-square-foot garden wall, a room-sized terrarium, and a gym with locker rooms.

“We actually hired a flow consultant, because we knew entering and exiting was going to be more than one way in and one way out,” said Ken Fisher, a partner at Fisher Brothers, of redesigning the elevators and entrances.

The HVAC systems were also upgraded to meet new COVID standards. The most recent round of renovations on the building began in mid-2019 and was completed in early 2021.