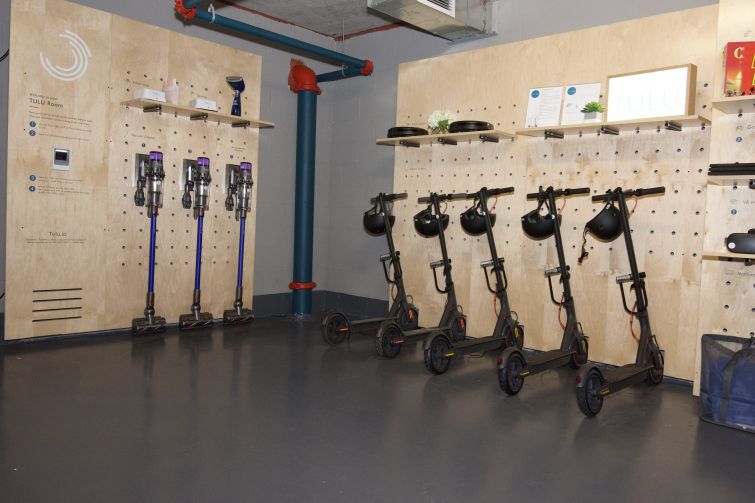 Tulu raised $4.5 million to expand to more buildings around the world. Photo: Tulu

A startup that rents items like vacuums and motorized scooters to apartment dwellers, Tulu, raised $4.5 million to expand its platform to more buildings, Commercial Observer has learned.

Tulu, which counts landlords Greystar Real Estate Partners and RXR Realty among its users, closed on the seed round to install itself in 150 buildings by the end of the year, and grow its team from 14 to about 20.

“We have a real, big pipeline and now it’s just about chasing demand,” Yishai Lehavi, co-founder and CEO of Tulu, said.

Tulu sets up on a spare wall in an apartment building, usually close to the lobby, and offers building residents the ability to rent things like VR headsets, electric bikes, mops, and more starting at $2 per half-hour, Lehavi said. It also has a store for people to buy cleaning supplies and ice cream.

Lehavi founded Tulu in 2018 in Israel with Yael Shemer, who serves as the chief customer officer. The pair mainly targeted student housing. The company moved its headquarters to New York City in 2019, and began targeting the luxury residential market.

Tulu is currently in 30 buildings in the United States, Europe and Israel, including The Moinian Group’s 71-story Sky rental building in Hell’s Kitchen.

The company has also installed itself in some commercial buildings, where office users can rent projectors, but plans to focus on the residential market in its next expansion push, targeting cities like Boston and Washington, Lehavi said. It’s even started to have some landlords including it in their plans for new building construction.

“Today, landlords are really looking for ways to bring in tenants and also have retention of tenants,” Lehavi said. “I think, unlike many other amenities, Tulu is very useful … [so] you have this amenity that is a really great selling point.”

Tulu’s seed round included investors Ground Up Ventures, i3 Equity Partners and Kairos.

How Latch CEO Luke Schoenfelder Unlocked the Secret of a $1.5 Billion Valuation