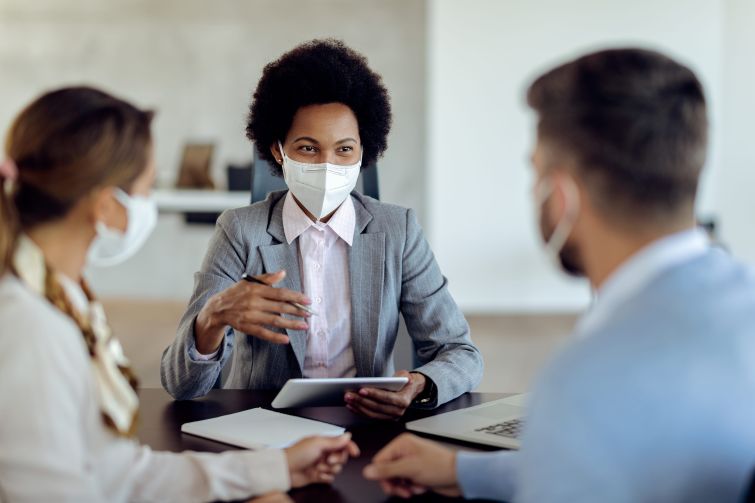 After a year of hearing that work-from-home (WFH) will become a permanent part of the office landscape, the approaching end of the pandemic is starting to show that may not be as true as everyone thought.

This was one of the insights discussed during “Bridging the Gap: How Landlord & Tenant Collaboration is Leading the Charge Back to the Office,” a March 16 webinar on the reopening of the workplace, hosted by Commercial Observer Partner Insights and presented by HqO.

Mentioning that Facebook, which previously talked about making WFH permanent, was now saying they’ll expect their employees back in the office, Rosenthal said he was unsurprised by this, based on data from his company’s HqO tenant experience app.

“Since December, we’ve seen consistent increases in user engagement,” said Rosenthal. “These are people who are engaging with the HqO platform either at, or about, their buildings.”

Rosenthal noted that top users were engaging with the app to learn about opportunities for amenities like on-site parking, child care, and on-site fitness centers.

“The real insight here is that users are making plans to return to the office, or they’re already showing up,” he said.

This was soon backed up by the result of an instapoll of the webinar’s 300+ attendees, which showed that 33 percent were already back in the office full time. Of the rest, 11 percent anticipated a return this spring, 22 percent expected to be back this summer, 25 percent this fall, and only nine percent didn’t see going back to the office until 2022.

“So, by the end of year, we’re going to have about 90 percent of folks working back in the office,” said Rosenthal. “I think that’s a good thing, and all the more timely for our conversation today.”

While discussing steps already taken to enhance occupier safety, Rippe mentioned that, in addition to constant sanitizing of surfaces, Pennybacker recognized the significance of proper ventilation in preventing COVID-19 and invested accordingly.

“Wherever possible, we increased to the highest quality filters we could have in place,” Rippe said. “MERV 13s were available on older systems, and, for newer ones, we’re designing them with medical-grade, dual-filter systems. We also invested in Needlepoint Bipolar Ionization for several of our office and multifamily buildings. We continue to make sure we’re redesigning our HVAC with that in mind.”

Masotto mentioned that Columbia Property Trust is handling things similarly, including the investment in Needlepoint.

“Bipolar ionization, for those that don’t know, really disinfects the air and surfaces,” he said, “reducing dust, mold particles, bacteria, and viruses — including COVID — by over 99 percent.”

Columbia also increased service hours for tenants that sought staggered schedules, and sought out WELL and Fitwel certifications to show their commitment to health and safety for their tenants.

Scholten added that The Swig Company, in addition to engaging in many of the same procedures and certifications as the others, also used a NanoSeptic product that rejects the growth of viruses and bacteria on surfaces, and placed directional indicators throughout its properties.

“We did that to manage the flow of people,” said Scholten, “to help with social distancing, to show how to line up to not be within six feet of each other, or even to share routes for dedicating entries and exits to minimize two-way intersections.”

Discussing ways to deepen the feeling of partnership with tenants, Rippe made the point that tenant communication has to include the details of how the office has been made safer in order to earn tenants’ confidence.

Scholten explained that he’s accomplished this with the help of the HqO app.

“We launched an app, powered by HqO,” said Scholten. “It’s our own brand and white-labeled. We’re able to take pieces of our formal communications and put those into bite-sized units. So, we could have a smaller piece of content around elevator policies that lives on the app, and that all the people working in the building can see and get that information quickly.”

But the attendees took tenant engagement further as well. Columbia held virtual town halls, and The Swig Company created app-based content specifically in an effort to keep the tenants plugged in to office life.

“We created content to keep them engaged while they were working from home,” Scholten said. “Trying to find meaningful programming was helpful. We even did surveys to ask tenants, ‘Would you like more tips on how to work from home? Or we can do trivia and raffles.’ We had good responses from that. People wanted to stay connected, and it turned out to be a lot of fun to find creative ways to engage the tenants and continue that relationship.”

At the webinar’s end, Rippe summed up the collective attitude on tenant engagement by noting that the better environment you create for your tenants, the better it will be for all involved.

“You’re in the business, as a building owner, of helping your tenants grow and succeed,” said Rippe. “So, the easier you can make their life, the stickier they’re going to be. If you can, by the way you’re running this building, create an environment where they’re successful, it’s going to be hard for them to leave. And they’re going to talk you up to friends and colleagues, and you’re going to be successful.”