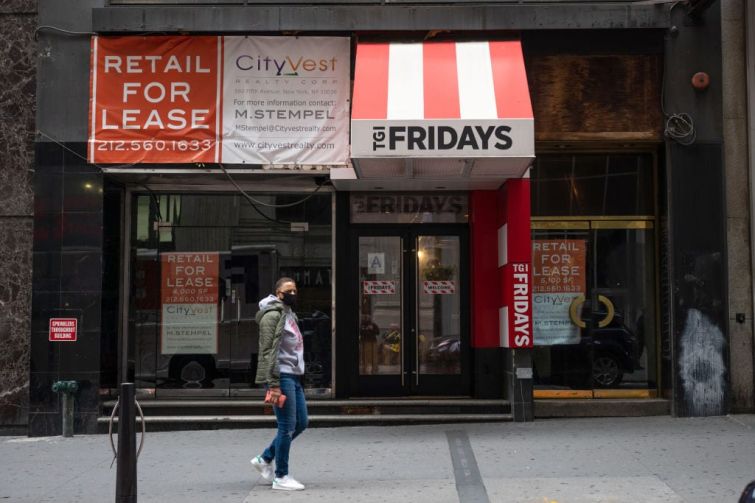 A person wearing a mask walks past a For Lease sign at a closed down TGI Fridays in the Financial District on October 22, 2020 in New York City. Photo: Alexi Rosenfeld/Getty Images

Japanese Snack chain Minamoto Kitchoan purchased the Childs Building — formerly home to a TGI Fridays — for $45 million, according to public records. The deal was finalized on April 9.

The property is the only privately owned space on Rockefeller Plaza and sold for $2,500 per square foot. The difficulties of opening a restaurant during the coronavirus pandemic helped to motivate the sale, Compass’ Adelaide Polsinelli, who co-brokered the deal with Adirondack Capital Partners for Riese, told Commercial Observer. In December 2020, 92 percent of New York City restaurants could not pay full rent, CO reported.

“The pandemic was wreaking havoc on the business,” said Polsinelli. “It was really difficult to open with all the restrictions imposed on restaurants in the city … And it was time. [TGI Fridays had] been there for 20 years.”

With the holiday tourism season — traditionally the busiest time of year for the neighborhood — hampered by the pandemic, Polsinelli said the business was harder to run. She was excited for the new Minamoto location to find a home in this historic building, designed by the architect of the nearby Chrysler Building.

Minamoto Kitchoan will likely renovate the six-story building, between 48th and 49th streets, before setting up shop, said Polsinelli. The confectionary chain represented itself in the deal and has seven other locations in the United States, including one just a few blocks away on Madison Avenue.

Representatives from Riese and Minamoto Kitchoan did not immediately respond to requests for comment.

Update: This story has been updated to include that Adirondack Capital Partners co-brokered the deal on behalf of the Riese Organization with Compass’ Adelaide Polsinelli.