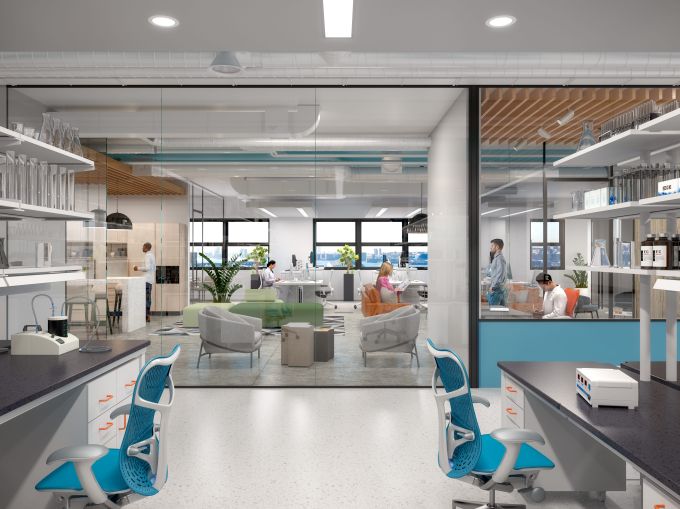 A biomanufacturing company backed by Bill Gates is establishing its executive headquarters and research lab in Hudson Research Center at 619 West 54th Street.

C16 Biosciences will move into 20,000 square feet of pre-built lab and office space on the seventh floor of the building at the end of this summer or early fall. Asking rents were in the mid- to high-$90s on a triple-net basis.

The new headquarters will house researchers developing an alternative to palm oil — an ingredient in more than half of consumer products and a cause of greenhouse gas emissions, according to Bloomberg.

C16 Biosciences’ move into the seven-year lease from an NYU Langone-run biotech co-working space in Hudson Square comes after the company closed on a $20 million, Series A investment round led by Gates’ Breakthrough Energy Ventures last year. Its expansion is another marker of the booming life sciences sector in New York.

“The West Side of Manhattan, where this building is located, is one of the hottest clusters for life science in New York City,” Taconic Partners Executive Vice President Matthew Weir told Commercial Observer. “We have the flexibility to accommodate a variety of users and I think that this proves it. … The building is creating best-in-class spaces that are flexible in their design engineering, as well as lease terms and things of that nature, to draw tenants that have different operations.”

Weir said Taconic was working to lease the remaining 80,000 square feet in Hudson Research Center and had received a lot of interest, as New York begins to gain a foothold as a life sciences hub. Silverstein Properties and Taconic were represented by Jonathan Schifrin and Alessio Tropeano of CBRE and Weir in the deal. C16 Biosciences was represented by John Isaacs of CBRE.

“We were thrilled to be able to represent C16 in relocating to 619 West 54th street, which is building a thriving life science ecosystem,” Isaacs said.

The New York City Economic Development Corporation was also excited by the move, with the acting chief linking a post-pandemic recovery to a strong life sciences sector.

“Building a successful recovery means ensuring the life science sector is equipped with the greatest potential for cutting-edge technologies and treatments for New Yorkers,” Rachel Loeb, acting president of the city’s EDC, said in a press release. “Companies like c16 Bioscience Inc. establishing its headquarters here is an example of the strength of the life sciences ecosystem and the city’s potential as a biomanufacturing hub. With a diverse talent pool, and advancements in technology, New York City is uniquely positioned to grow as a global leader in life sciences research and innovation.”

Update: This story has been updated to indicate that Schifrin, Tropeano and Weir represented Taconic and Silverstein together.