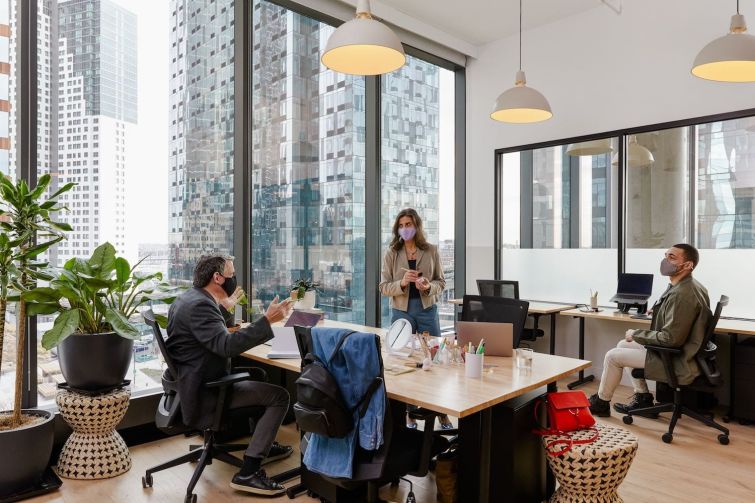 A WeWork space designed with safety in mind. Photo: By WeWork

Coworking giant WeWork is partnering with Washington, D.C., Mayor Muriel Bowser‘s administration to bring discounted and, in some cases, free, membership to the city’s residents and companies in a deal that’s expected to bolster the return to the office.

Through the D.C. x WeWork partnership, local businesses and individuals will have access to reduced rates on WeWork spaces if they are relocating to, returning to, or expanding in D.C. The prospect of adding fresh members comes as the beleaguered firm undertakes a turnaround effort that has included shedding leases, and amid reports that the firm lost $3.2 billion last year.

The D.C. partnership will offer deals to new members, including a one-month free trial of its membership program WeWork All Access, which provides entry to all WeWork locations, followed by 15 percent off for the remainder of the year. Another deal involves discounted pricing on private office space, with two months free on a six-month commitment, or three months free on a 12-month commitment.

“WeWork and D.C. struck this partnership to foster post-pandemic economic recovery,” Errol Williams, WeWork’s territory vice president for the D.C. region, told Commercial Observer. “COVID-19 has fundamentally shifted the idea of the office, demanding a completely new approach to how organizations small and large think about their real estate footprint. Returning to work in a safe, flexible way will help support economic recovery and revitalize business in cities.”

The partnership is also targeting college students: Georgetown University is offering WeWork All Access memberships to its entire student body of approximately 19,000 students, including domestic and international, undergraduate and graduate students during the spring semester, which runs from January though May.

The D.C. partnership was announced today at the annual March Madness event. WeWork previously announced a similar partnership with the New York Chamber of Commerce and is planning another one in Miami.

“A key part of the partnership will focus on data,” Williams said. “WeWork will provide the D.C. mayor’s office and local stakeholders with key data and insights into what is most effective as businesses return employees to work, creating a resource for businesses of all sizes to make informed decisions as the economy recovers.”

With the Georgetown partnership, roughly 5,500 students have signed up for the deal and visited the coworking space in at least 36 cities and 11 countries.

“Throughout the pandemic, Georgetown has evaluated how to best support students, including finding new ways to enrich the virtual learning experience,” Williams said. “WeWork All Access provides students with access to any WeWork in the world, so that they may have 24/7 access to a quiet study space, high-speed internet, printers and phones, and a change of scenery.”

On the D.C. side, the initiative is being led by John Falcicchio, deputy mayor for planning and economic development for Mayor Bowser.

“These types of partnerships are going to help D.C. come back strong in 2021 and beyond,” Mayor Bowser said in prepared remarks. “Throughout this pandemic, our businesses and workers have shown a tremendous amount of resilience and creativity in finding ways to pivot their services and operations. Now, in WeWork, we have another partner in those efforts and another way to think about safely returning to work.”

WeWork’s health and safety measures, response plans, and space modifications have been audited and endorsed by Bureau Veritas, a testing, inspection and certification organization.