Many Manhattan Developers Idle as Electric Car-Charging Demand Revs Up

Working plugs are few and far between, and the money in parking garages isn't helping 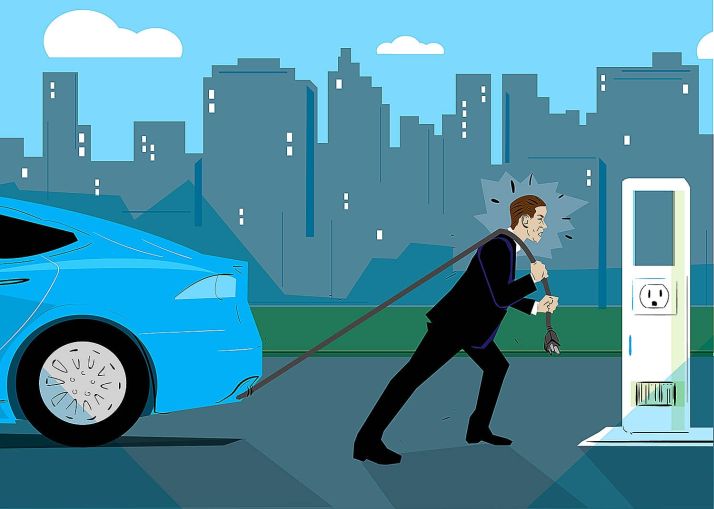 In a forlorn little corner under 255 Greenwich Street, a 14-story office building in the Tribeca section of Lower Manhattan, sits a two-prong charging station for electric vehicles.

The charger was actually the only one Commercial Observer could find when it combed Lower Manhattan and the Upper West Side during the third week in March in search of places to plug in electric cars, which are said to be the wave of the future in personal transportation. General Motors, the largest U.S. automaker, announced plans in January to make nothing but electric vehicles by 2035.

And the push is on to convince the motoring public it can ditch the old gas guzzler for an electric with the same ease of ownership, which has a lot to do with the abundant availability of fuel. The $2.3 trillion infrastructure plan that President Joseph Biden unveiled on March 31, in fact, includes $174 billion for promoting electric vehicles.

For now, though, if CO’s little trip was any guide, lord help the poor soul who is driving around Lower Manhattan low on juice looking for a place to plug in.

Checking four places in Battery Park City using Google as a spotter, only one working station, the one under 255 Greenwich, could be found, although a second, at 20 River Terrace, aka The Solaire, was said by the parking attendant to be out of order.

The other two just didn’t exist, or at least the attendant did not know about them. The same held true for two parking garages under apartment buildings on the Upper West Side.

The Solaire, whose motto is “Invest in a Balanced Life,” is one of New York’s most celebrated “green” apartment complexes, winner of the U.S. Green Building Council’s highest LEED rating: platinum. The Albanese Organization of Garden City, N.Y., is the developer of the two-building complex.

In an email after CO’s visit, an Albanese spokeswoman said the company hosts three chargers and all are in working order. The company is not paid for hosting the chargers, she said.

Jack Resnick & Sons, the Manhattan-based company that built 255 Greenwich and still owns it, said in an email relayed through a spokeswoman, that it doesn’t run the garage. Instead, it is run by a contractor. Its buildings around Manhattan have eight charging stations in their garages, the company said.

“Sustainability is one of our core values,” Jack Resnick & Sons said in an email. “We embraced EV charging stations early on and believe that they are a great amenity for our tenants.”

The best that can be said about the charging situation in New York is that it needs work, and, fortunately for electric car drivers, there’s all sorts of momentum from the city and the state, and obviously from electric automakers, to remedy the problem. EVolve NY, a program of the New York Power Authority, to cite one example, has committed $250 million to expanding public fast-charging options.

And, in December, Gov. Andrew Cuomo announced what he described as the Northeast’s largest fast-charging station, with 10 ports, at John F. Kennedy International Airport in Queens.

Such momentum, too, could be building at just the right time. The coronavirus pandemic caused a plunge in public transit ridership as users skittish about contracting the largely airborne pathogen either stayed home or switched to private vehicles. As workers trickle back to Manhattan offices in the coming months, those private vehicles, including electric cars, could remain in particular demand.

Until any major expansion in the number of charging stations, though, driving an electric around Gotham will be an act of frustration, whatever the growing demand.

“I’ve just driven back from New York to Kingston (a city in Ulster County upstate) and I had a frustrating time,” said Elizabeth Broad, who is the campaign director of New Yorkers for Clean Power and drives an electric Chevy Bolt. “I wound up recharging it at a Chevy dealership. When you’re an early adopter, you have to be really good at planning on long car trips.”

Another thing that can be said about electric cars is that it’s a lot smoother to operate one in a suburban environment than an urban one, at least for now. Conventional gas stations — rare and getting rarer in Manhattan — can accommodate a couple of chargers, as can any at-grade parking lot. In New York, people are accustomed to moving around by subway, and a lot don’t own any kind of car. Some don’t even know how to drive.

Those who do have cars live in constant awareness of the alternate-side-of-the-street parking rules. If they live in a rowhouse or a single-family home, they are not about to run an extension cord across the sidewalk to charge up their car. And a lot of folks live in high-rise apartment houses, many of which have a multi-space garage at, or under, street level. The ones that have chargers are easier to use by folks who live in the building. If they live elsewhere, they have to convince parking attendants to let them in, for which they will either charge them or not.

With parking costing at least $60 a day on the average workday in Manhattan, there’s no incentive to bring in more chargers and take up those remunerative parking spots.

“You may think I’m mad,” said David Hughes, a co-founder of EV Connect, a company that tries to help electric vehicle owners find chargers, so he’s someone who thinks about this issue every day.

“I lived in New York from 1980 to 1988,” Hughes said. “And, when I go back to New York, which, pre-COVID, was six to eight times a year, I actually like to drive around. I put in my last trip in March 2020. I paid as much as $68 to park for a day in Midtown Manhattan. I often hear from parking operators, ‘Why would I dedicate six to 10 spaces in a prime piece of real estate, which are probably not going to be used, when I can charge somebody like you $68 to park there?’”

EV Connect is one of a handful of companies that make a phone app that locates chargers for a membership fee. Another is Plugshare, which Broad described as “very handy.” And a company called Plugless says it is manufacturing a wireless, vehicle-charging system that will work on nearly half of the North American EV market. There are also various tax deductions and government incentives for EV buyers.

There are basically three kinds of charging stations: Level One, Level Two, and DC fast-charging. Level One charging is 120 volts, which is the same as your household current. It’s free or cheap, but slow; it would take all night to fully charge a car, which is why it’s most often used by suburbanites who can run a line into their own garage or driveway. Level Two uses 240 volts, requiring special wiring. It’s faster but more expensive, and generally you have to go to a charging station for it, though some utilities have been offering free Level Two charging equipment to drivers.

DC fast-charging doubles the voltage of Level Two to 480 volts. It’s the most expensive charging option, but almost duplicates refueling a gasoline car at a gas station. Tesla, who’s Model 3 is the most popular electric car by far, according to Statista, makes a fast-charging “supercharger” that is only compatible with Tesla vehicles. Elon Musk’s Tesla has its own network of charging stations, too.

(Except for the one fact attributed to Statista, facts in the last two paragraphs are from the website of Drive Electric Vermont; and, if electricity costs 13 cents per kilowatt hour, then it would cost about $9 to charge a fully depleted EV to a 200-mile range, according to the U.S. Department of Energy.)

Stephen Pallotta, manager of the New York chapter of the Tesla Owners Club, said that siting stations is a diverse matter. Some sites are leased or bought, while others are provided for free. “It looks really good for developers,” he said, “that they’re forward-thinking, they care about sustainability; it’s a great thing to have.”

New York City is under an executive order to convert its entire fleet to electrics by 2040, according to a spokesman for the Department of Citywide Administrative Services, which is in charge of the switchover. The city has 24,709 on-road vehicles and another 5,402 pieces of equipment; of those, 9.5 percent are plug-in electric, and another 18 percent are hybrid electrics, he said. The city fleet includes police cars, street sweepers, garbage trucks and fire engines, he said. City buses are state-controlled.

The city is not moving fast enough, said Wayne Arden, a Sierra Club NYC volunteer and a former consultant to nations on creating carbon exchanges. “What I proposed would accelerate New York City’s timeline for adoption of zero-emission vehicles by 10 years or more,” he said. “And, of course, New York City is influential.”

He thinks the switchover to electrics is inevitable, and the internal combustion engine is going the way of the dinosaurs. He said in a recent Sierra Club presentation that the world is “poised for a massive move from oil to electricity” and the move could help counter the warming of the planet.

But there are those, including Wall Street investment touts, who think electric vehicles are only a way-station to the really big switch: driverless cars. Musk is working on a technology called “SAV,” or “shared autonomous vehicles,” while others call it TaaS, or “transportation as a service,” in which people would order a driverless car to take them places, and would not own a car themselves.

The driverless technology is not exactly seamless, though, yet. According to a March 23 New York Times story, the National Highway Traffic Safety Administration was by then investigating 23 crashes involving Teslas that used the company’s Autopilot guidance system.

A large number of companies are working on such technology, however, where the cars would learn to drive themselves using artificial intelligence, programmed to recognize any and all potential traffic conditions, and adjust. These cars would run on electricity.