Southern California on Track to Reopen Businesses This Week

Indoor dining, movie theaters and gyms are set to reopen, with capacity restrictions, in L.A. County and beyond 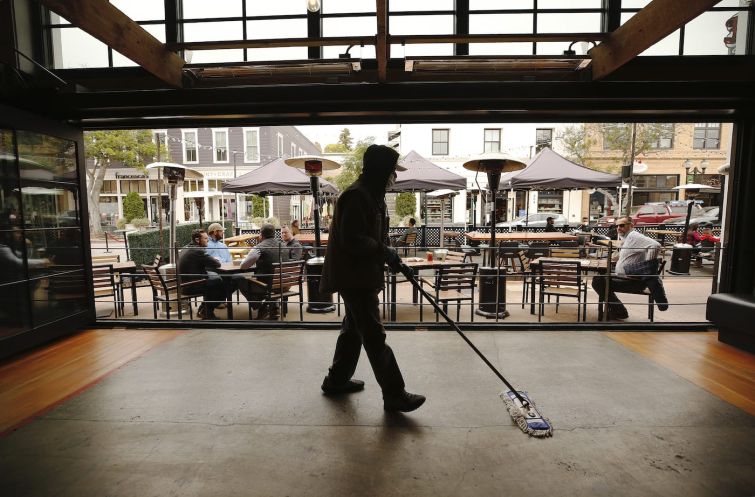 Part of the sanitation team cleaning a restaurant as they prepare to open for indoor dinning. In the "red tier," counties are allowed to reopen indoor dining and gyms. photo: Al Seib / Los Angeles Times via Getty Images

Southern California is on track to reopen major parts of its economy as soon as this week, following rapid improvements to the rate of positive coronavirus tests and the number of administered vaccines.

Once the state administers 2 million vaccine doses to communities with the lowest score in the Healthy Places Index, officials in the most-restrictive regions can ease some safety protocols. New data from the state shows it is on track to hit that mark by the end of this week. Los Angeles County health officials announced Monday that they are preparing to move to a less-restrictive tier in the reopening process as the region reached “pre-surge” levels in coronavirus cases.

Based on case rates released by the state on Tuesday, L.A. and Orange Counties, as well as part of the Inland Empire, will be eligible to move to the second of four tiers, from the purple tier to the red tier.

According to state guidelines, counties in the red tier can open restaurants and movie theaters for indoor operations at 25 percent capacity up to a maximum of 100 people. Those counties can also increase capacity at retail establishments and shopping centers from 25 percent to 50 percent, and grocery stores can operate at full capacity. Additionally, gyms and fitness centers can open with 10 percent capacity with strict modifications.

“We are at a point in the pandemic where we have a great deal of optimism,” Dr. Barbara Ferrer, director of the L.A. County Department of Public Health, said in a statement Monday. “We are making progress on vaccinating our residents, cases, hospitalizations and deaths are decreasing, and we are likely moving into a less restrictive tier.”

Last week, the state also announced updates to the Blueprint for a Safer Economy, setting the stage for California sporting arenas, live concerts, and theme parks to open with significant capacity and safety modifications across the state by April. Advancing to the red tier allows for outdoor events at 20 percent capacity, limited to in-state visitors only, and the consumption of concessions will be allowed only while seated.

County health officials are also preparing for schools to be permitted, in the red tier, to open for on-site learning for grades 7 through 12.