Let’s Talk About Race: The Mayoral Candidates on Housing, Police and Hiring 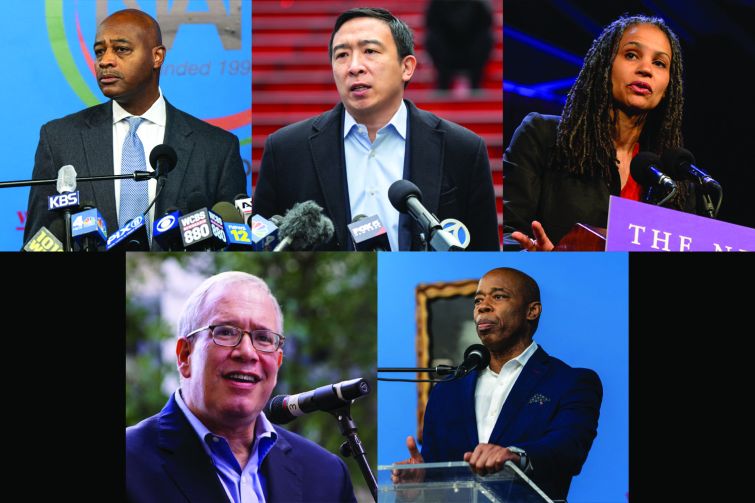 Throughout New York’s mayoral primary, candidates have posed an uneasy question to voters, and to each other, about what it means to be a New Yorker — and questions of diversity and inclusion.

At a Martin Luther King Jr. Day event in Harlem in January, Democratic politicos tried to outdo each other about how they should address income inequality, housing affordability, and racial injustice.

City Comptroller Scott Stringer lay the blame for rising rents and displacement at the feet of developers building luxury towers in low-income communities. Brooklyn Borough President Eric Adams suggested New York “belonged to the people that were here and made New York City what it is,” while newcomers move back to Iowa and Ohio.

As the race has grown closer, mayoral candidates have sniped at each other about their New York bonafides.

When Andrew Yang prepared to announce his bid in January, his rivals chastised him for relocating his family upstate during the pandemic. Others questioned whether he could reasonably be called a New Yorker, since he spent his childhood in the Westchester County suburbs and avoided local politics before running.

Yang, who touted his candidacy as a fresh-faced outsider, is hardly the only mayoral candidate who grew up outside the city. Maya Wiley was raised in Washington, D.C., before heading to Dartmouth College. Ray McGuire is a Dayton, Ohio, native, and attended prep school in Connecticut and then Harvard. The last two mayors spent their formative years in the Boston area, lest anyone forget.

However, voters may be less inclined than ever to consider a candidate’s biography. The city’s crises have only heightened racial and economic disparities, and New Yorkers are keen to hear candidates’ plans to protect against the pandemic, create jobs, build housing, and stamp out systemic racism.

That includes the commercial real estate industry. The next mayor’s appointees will impact myriad issues that affect the sector, and ongoing efforts to diversify who gets which and how many city contracts will also have an effect.

A spate of anti-Asian hate crimes that have proliferated during the pandemic have rattled New Yorkers, too. Yang warned that the mood on the streets “metastasized into something far darker.”

But New York City shapes its identity from its multi-ethnic, polyglot communities who passed through the city’s harbors, highways, and airports one way or another. The next mayor will need to draw from this strength and rely on a diverse set of voices to steer the city’s back from near devastation.

The first thing the next administration can do to show that it values diversity is through its hiring.

That’s the approach Bill de Blasio took when he first ran for mayor in 2013. His breakout moment in the race occurred when he released a television ad featuring his biracial children with the implication his administration would look like his family.

Once the election was over, however, filling out the mayor’s staff with talented representatives from different corners of the city proved a tough task.

Bertha Lewis, a one-time de Blasio ally and founder of the Brooklyn-based think tank, The Black Institute, found that young activists of color she knew had trouble getting through the door at City Hall.

“People were willing to give their right arm to work in that administration, and yet many of them didn’t know how to apply, who to apply to, or never heard whether they made it or didn’t make it,” Lewis said. “A pattern emerged and it became about who do you know.”

The mayor did place highly touted women of color in leadership positions — and managed to undermine many of them. Among those who burned out or were forced out during de Blasio’s tenure include deputy mayors Lilliam Barrios-Paoli and Dr. Herminia Palacio, health commissioners Dr. Mary Bassett and Dr. Oxiris Barbot, children’s services commissioner Gladys Carrión, New York City Housing Authority chair Shola Olatoye, and mayoral aide Rachel Noerdlinger.

Meanwhile, younger staffers of color complained they were paid less than their white counterparts and “microaggressions were rampant,” according to Cristina Gonzalez, who worked in the mayor’s office.

The current crop of Democratic mayoral candidates has pledged to hire a diverse workforce in January.

Eric Adams touted his staff’s diversity at Brooklyn Borough Hall and record of hiring over the past eight years.

“Under Eric’s leadership, City Hall’s diversity will reflect New York City’s — and his team will include the ethnicities and orientations that give our city its strength,” Adams spokesman Evan Thies said. “He would continue to hire as mayor in a way that ensures all New Yorkers are represented in their government.”

Chris Coffey, an Andrew Yang spokesman, said if Yang were elected, he would make sure his administration “reflects the city.”

“That means being mindful and aware of diversity and making sure the mayor’s office and city writ large looks like the city,” Coffey said.

Lupe Todd-Medina, a campaign spokeswoman for Ray McGuire, pointed to the former Citigroup executive’s work history, and the inclusion of women and people of color in high-ranking positions in his campaign.

“If you look at Ray, he has made a point of ensuring that, in the finance and business world, he has made a concerted effort to ensure Black and brown women were included and considered in positions where he was able to have influence on hiring practices,” Todd-Medina said. “That is who he is. I don’t see that changing if he goes to City Hall.”

And City Comptroller Scott Stringer said his campaign is “building a multiracial, intergenerational coalition that reflects the best of our city.”

Advocates just want to ensure their communities have a role in city governance.

“Watch what they do, not what they say,” Lewis said. “They have to listen to staff, too, and not just have people there like some United Colors of Benetton ad, so it looks like diversity.”

Building more affordable housing is one of the best ways to reduce inequality and desegregate neighborhoods, but fixating on volume over location can muddle those goals.

The de Blasio administration proposed creating and preserving 300,000 below-market-rate units by 2026, an ambitious plan that surpassed the mayor’s initial goal of 200,000 units over a 10-year period.

But many projects were concentrated in low-income communities instead of wealthier enclaves that became unaffordable for longtime residents.

Some housing advocates believe the mayor’s focus on “counting units” obscured the mission to redress racial inequity, too.

“If one of the goals of housing policy is integration and racial inclusion, you have to build housing in neighborhoods that have historically excluded communities of color,” Jessica Katz, executive director of the housing research nonprofit Citizens Planning and Housing Council said. “It doesn’t focus on who the housing is for. They were just trying to create as many units as they can.”

Voters want to see a more nuanced approach next year. In a March CPHC survey of 1,500 Democratic voters, 3 in 5 respondents believed housing costs and homelessness were one of the top problems the city faced, and half said the city isn’t building enough units.

Rezoning swaths of wealthier neighborhoods — like the city’s current SoHo and Gowanus rezoning plans — could boost housing supply, lower the cost of real estate, and make neighborhoods more diverse without a hit to the city budget.

But the next mayor will have to contend with localized opposition to individual sites, like the Lucerne homeless shelter on 79th Street that Upper West Side neighbors have pressured de Blasio to relocate.

“The next mayor is going to be faced with this choice to help house homeless people, or yield to neighbors with concerns who are afraid of homeless people,” Katz said. “It’s a difficult position for a politician, but the implications for racial equity are clear.”

The mayor has little sway on tax rates, civil rights issues, and education policy, which are ultimately determined by the state or federal governments, but he or she has control over one lever that can create a more diverse business class and close the income inequality gap.

The de Blasio administration has awarded $13.2 billion to minority- and women-owned firms since 2016, with a goal of doubling that amount by 2025, and more than 10,000 businesses have received contracts as of August.

But the city struggled to make deals with businesses last year during the coronavirus surge — de Blasio blamed the delays on red tape — and a July executive order expanding the pool of contracts that qualify for the M/WBE program inexplicably excluded Asian Americans, whose businesses have suffered from the pandemic.

Several candidates want to use the city’s M/WBE contracting program as a way to build a more equitable local economy.

McGuire, for his part, wants to create a deputy mayor position that focuses on small business services and M/WBE contracts, as well as mentorship and recruitment.

“There isn’t much for professional development and assistance to help people compete and win these contracts,” Anthony Hogrebe, a McGuire campaign adviser who used to work in the city’s Economic Development Corporation, said. “They’re frequently issued on a relationship basis and to those who have done work before. It’s hard for new businesses who haven’t done this work before to break into this space.”

Mayor de Blasio and the City Council responded by shifting $1 billion from the NYPD to other agencies, in a move that managed to incense everyone involved. And de Blasio received heavy criticism from allies and his own staff for defending police officers, who drove into a crowd of protesters in Brooklyn and trapped demonstrators in a violent confrontation in the Bronx.

Candidates have already staked out positions about how they will divvy up the department’s $10.9 billion budget. Dianne Morales, former CEO of Bronx affordable housing developer Phipps Neighborhoods, supports “defunding” the police entirely. Maya Wiley, a former counsel to de Blasio and ex-chair of the NYPD watchdog Civilian Complaint Review Board, who has made criminal justice reform the centerpiece of her campaign, has called the department’s budget “bloated,” but hasn’t said how much she would snip away. (Wiley’s campaign did not respond to a request for comment.)

The fight over the city budget could be determinative for many Democratic stakeholders. Murad Awawdeh, interim co-executive director of the New York Immigration Coalition, said he believes the time for reform and training are over. He wants to see police funds redirected toward infrastructure programs and services for communities of color still recovering from COVID-19.

“We can’t keep reforming and training our way out of these issues with the NYPD. We really have to have strong reforms,”  Awawdeh said. “We need to make sure the city budget is a values budget and that there is unity, fairness and justice in our city. We can’t do that until we are investing in our most vulnerable and marginalized communities in our city.”