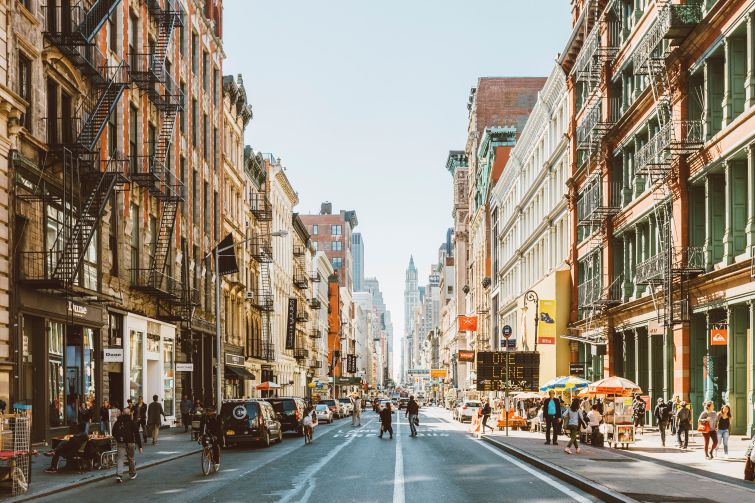 The mayor announced today that Soho and Noho will be rezoned ofr new housing and retail next year. Photo: Getty

Mayor Bill de Blasio announced Wednesday morning that he plans to move forward with the controversial rezoning of Soho and Noho, two of New York City’s wealthiest neighborhoods as well as a retail and tourism epicenter.

Despite vocal opposition from longtime residents of Soho’s pricey loft conversions, the administration plans to update the area’s 1960s industrial zoning with rules that will allow new retail and residential development.

The proposal would allow up to 3,200 new apartments—a quarter of which would be affordable—to be built in the area bounded by Canal Street to the south, Houston Street and Astor Place to the north, Lafayette Street and Bowery to the east and West Broadway to the west. The New York Times broke the news about the rezoning earlier today.

The mayor’s office revealed Wednesday that Soho/Noho rezoning will enter the public land use review process—formally known as ULURP—sometime next year. The Department of City Planning has already set a scoping meeting for the rezoning on Nov. 10, and sources familiar with the process say planners have already begun work on the lengthy environmental impact statement required for the formal rezoning process. A DCP spokeswoman noted that ULURP usually starts about six months after a scoping meeting takes place.

ULURP typically takes about nine months and involves meetings and approvals at each level of city government, including community boards, borough boards and the City Council. The mayor will leave office at the end of next year, which means that Soho/Noho will need to enter the land use process at the beginning of 2020 in order for the rezoning to become law before the end of de Blasio’s term. Local Councilmember Margaret Chin has expressed support for the city’s plan, which was developed over the course of several community meetings last year.

“I’ve always maintained that the fight to create new deeply affordable housing and expand housing stability is a shared responsibility,” she tweeted this morning. “I am excited to work with residents, stakeholders, and the Administration to take our dialogue on the future of SoHo and NoHo to the next level.”

Soho is one of Manhattan’s priciest retail corridors, and it had struggled with falling rents and rising vacancy rates for quite some time even before COVID-19 hit the city. Zoning rules limit the size of new retail stores in the area and often force landlords to get a special permit in order to expand a storefront. Residential development is not allowed under the current zoning, and some of the existing residential conversions are technically illegal.

“There’s important work to do in terms of development that actually produces for communities,” the mayor said during his daily briefing today. “In Soho/Noho you’re talking about an area that has very little affordable housing. We have an opportunity to bring a greater mix of New Yorkers to an area that has been higher-income… And we need clearer rules to help retail survive. There needs to be affordable housing in every community, even ones that are upper-income.”

Gary Tarnoff, a land use partner at law firm Kramer Levin, felt that the rezoning could be completed next year if city officials prioritize it.

“I think by the end of 2021 it’s possible,” said Tarnoff. “I haven’t seen the scope [of the rezoning]; I haven’t seen how extensive it is. It’s more likely to go into 2022. But if they get the environmental impact statement done by the spring, the process could be done in 2021.”

The city’s proposed rezoning map only highlights a few blocks of development sites, a move that raises the question of where 3,200 new units will be built. Tarnoff noted that the number may include conversions of existing loft buildings, along with legalizing conversions that occurred years ago.

Pro-development groups like Open New York have pushed for the rezoning, which would be the administration’s first major rezoning in a wealthy neighborhood.

“For too long, housing and land use politics in New York have allowed exclusionary neighborhoods to reject new housing, and this rezoning is an important first step to reversing that status quo,” Open New York board member Will Thomas said in a statement. “Seeing the rezoning through is a matter of racial and economic justice, and the Mayor must see complete this process if he is to have any chance of repairing his legacy and living up to his ideals.”

Meanwhile, community groups and preservationists have argued that the plan would produce out-of-scale luxury development in the heavily landmarked, low-rise neighborhood.

“In spite of assurance for months to the contrary, it looks like city officials are moving full steam ahead with a plan to upzone Soho and Noho, to allow vastly increased amounts of super-luxury housing in the neighborhood in out-of-scale high-rise towers, while they continue to refuse to consider measures that would produce more affordable housing while preserving neighborhood scale and character,” Andrew Berman, head of the Greenwich Village Society for Historic Preservation, said in a statement.

Deputy Mayor Vicki Been also said last week that the long-planned rezoning of Gowanus would enter land use review in January. Gowanus, like Soho, has rents high enough to cross-subsidize low-income housing under the mayor’s Mandatory Inclusionary Housing program, but city officials have struggled to get that Brooklyn rezoning over the finish line for the past few years.