The commercial real estate industry is just catching up to the needs of modern businesses, he says 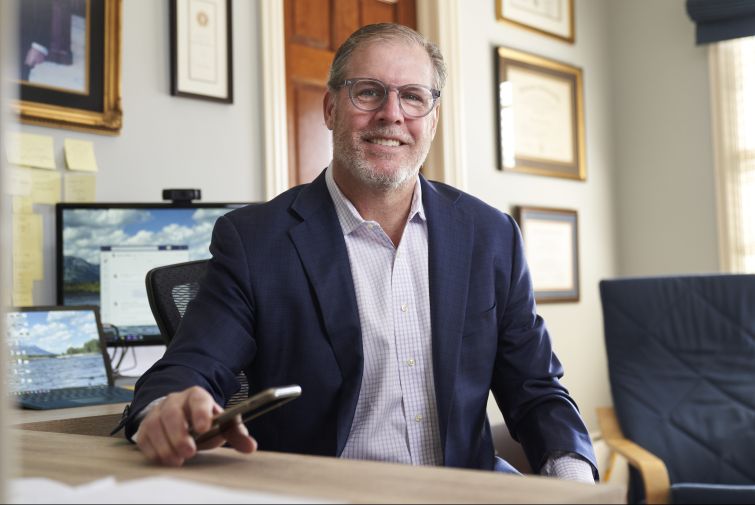 The crash and burn of coworking was one of the signal failures in commercial real estate the past couple of years.

For many landlords, coworking, or flex space, was the new black, a must-have category of tenants that provided an amenity for a pipeline of young companies that were candidates for traditional, long-term leases. It was also a filler of otherwise empty, otherwise non-revenue producing, space. What was not to like?

Turns out, plenty. The naysayers, the ones saying that these companies would sink in a downturn, turned out to be right. Add on top of that a pandemic, which has your hottest space users looking askance at the stranger, masked or unmasked, next to them, and you have the makings of a multiple-system failure.

It’s hard to say how much of that failure was due to coronavirus and how much because of weakness in coworking’s business model. Any business dependent for cash flow on startups and companies still in Series A or Series B financing is going to have some people wondering if there will be a leg to stand on once the economy starts running in reverse. At the end of the day, does it really matter?

So, with the biggest, new wave, coworking company, WeWork, still recalibrating after a failed initial public offering, followed by one of its most aggressive rivals, Knotel, going Chapter 11, and others taking stock and prepping themselves for the post-COVID world, The Instant Group’s Joe Brady, CEO for the Americas since December 2019, is getting ready for coworking 2.0. It’s supposedly a wiser and sturdier version of the concept, designed with post-COVID customers in mind.

What Brady expects is that business people will be more comfortable with turnkey space, places to call their own, instead of working side by side with others. This setup will be far different from coworking’s first iteration. For one thing, it will involve more agile use of space, so operators don’t get stuck with empty workstations.

For another, users are going to demand satellite offices in the burbs, or closer to where they live, to save time, energy, and money otherwise spent commuting. A study by The Instant Group and consultancy Hickey & Associates released this month found that 85 percent of all flexible space in the tri-state area was in Manhattan. That won’t work anymore, Brady said.

In an interview earlier this month, Brady further explained how coworking might work once concern about the virus has passed. His remarks have been lightly edited for brevity and clarity.

Joe Brady: The good news is we actually had an in-person tour yesterday. I was out of the house, with a client, and so there’s some progress happening, which is good.

Commercial Observer: What were they looking for, and what were you looking for?

Our client was looking to identify a more modern office situation for their population, so we were looking in Philadelphia, comparing Center City by City Hall versus University City; that’s proximate to University of Pennsylvania and Drexel [University]. It was fun and refreshing to be out. Rather than just talking about what we think is going to happen, it’s good to see companies starting to make some decisions.

What does The Instant Group do, and what service do you provide?

The Instant Group enables agility for corporates. We are able to access the lease and service office parts on behalf of our clients, and put them in an agile, flexible arrangement. So often, corporate real estate doesn’t keep up with the speed of business. Instant is able to deliver on that. Whether it’s in a service office, like a WeWork or an IWG, or in a space that we would build out and turn over the keys for our client.

So it’s a different spin on coworking. You get the clients first, and then you provide the space, as opposed to getting the space and hoping the clients show up?

That’s exactly right. We’re not a product. We’re a service. We’re a delivery vehicle for agility. We have the largest integral market for flexible office space in the world, called instantoffices.com, and that gives us extraordinary insight and data on supply and demand that exists, and we cover 2,500 cities globally. When clients come to us, we are able to really leverage that for their benefit.

How do you interpret what happened to WeWork, and where do they stand now?

There’s been tremendous reporting on their demise, and what happened with their previous CEO [Adam Neumann, who co-founded the company]. I’d rather not look in the rearview mirror; there’s going to be books and movies coming out on that.

They’re under new leadership with Sandeep Mathrani; they are engaging in a very disciplined, strategic approach to righting the ship, by all accounts. Their cash burn has been reduced significantly. They’re exiting assets that don’t make sense. And they’re focusing on filling up the spaces that they have.

They’ve done a real interesting job in other sectors, like public institutions and higher education. As a function of the pandemic, they’ve been working with a number of universities to get students and faculty working together safely.

I’m happy to see the company turning the corner. I really think it’s a function of the leadership of Sandeep and the team that he’s brought in, working with the other executives that were there. Clearly, there was a lot of head-count change. It’s not about growth for growth’s sake anymore. They’ve gotten smart about things. Which is good, because they’re a very significant part of our online platform and the corporate solutions work we do with clients. We put clients in WeWork space, among other spaces as well. We want the industry to be strong. We want them to be strong.

How do you think the virus has affected commercial real estate generally, particularly the coworking industry?

If you think about the typical business cycle for strategic evaluation, whether it’s your numbers or your head count, it’s probably down to four to six months. And if you think about what that means for opening a new office, if you were to lease a core and shell building, it could take 24 to 36 months to get in that new building.

If you think that your head count is going to change every four to six months, or at least you will have some course correction, you’re guaranteed to be wrong in whatever shape or size you build out. Likewise, if you have a traditional lease — by the time you’ve gone through the whole process, the shortest amount of time is probably 10 months. You could go through two business cycles of head-count evaluation during that time.

The second point, which is around agile leasing and agile, flexible real estate, you do have an opportunity to make decisions and evaluate and course correct your portfolio at the speed of business. So, whether you sign a six-month flexible lease or you have a flexible lease and some fixed space, the key is to have the ability to drive agility, the ability to move quickly and easily; and traditional corporate real estate is antithetical to that ability.

In a post-virus world, are people going to want to be in spaces where they are strangers to one another?

Part of the challenge is debating methodologies. People use coworking and flexible space interchangeably, and I view coworking as open space with bench seating and maybe random individuals working side by side — not dissimilar to going to a Starbucks and working. But what we’re seeing more from a trend perspective is more enterprise clients, wanting their own privately controlled workspace. So, there’s a door, and there’s a lock and there’s privacy. And that’s probably more resilient in a post-pandemic world.

I tend to agree that in the next 12, 18, 24 months, that the idea of sitting closer than six feet from someone you don’t know may not be the most attractive. But that’s only a small part of what we are talking about, in terms of flexibility and agility in corporate real estate.

What you’ll be thinking about are large corporates addressing their headquarters needs, which will then be a different discussion from the regional or local tail of the portfolio, the small- and medium-sized offices that they have. And I think that’s where you’re going to look for more agility.

Think about a financial services company, insurance brokerage, or wealth management or consumer product company sales office and things like that. There was a time when everybody had a desk with a picture of their dog on it. Guess what? Those days are over.

You hear a lot these days about people not wanting to spend an hour, or an hour and a half, commuting, and they would rather work closer to where they live. Do you think that’s real?

I do think that’s real. And I do believe flexible office space will continue to propagate in the secondary cities and in the suburbs. A report The Instant Group did with a company called Hickey showed that the growth in the secondary cities and suburbs has outstripped demand in the central business districts by 57 percent. Employees want to work closer to home. They want to have that option.

Even in New York, we found that employees are commuting, on average, an hour and a half a day. For those driving, it costs about $7,000 a year in mileage costs; and about $1,100 a year in public transportation.

Those are significant costs, in terms of time and money. So we’re seeing a shift, and the number of requirements we’re getting for suburban New York, whether it’s Bergen County [N.J.], or Westchester or Long Island, is significantly greater than what we’re seeing inside New York.

The key thing is going to be optionality — it’s not going to be either/or. What we’re seeing emerge is this continued concept of hub and spoke. You will have an opportunity two or three days a week to go into your Midtown office, and engage in purposeful presence, as opposed to passive attendance. You’re not going to commute an hour and a half per day just so your boss knows you’re there.

The post-pandemic employee is going to be a consumer of space, and they’re going to decide where they want to work. Companies are going to have to have choices — approved, safe, IT-enabled choices for those people to go and do what they need to do, wherever they do it.