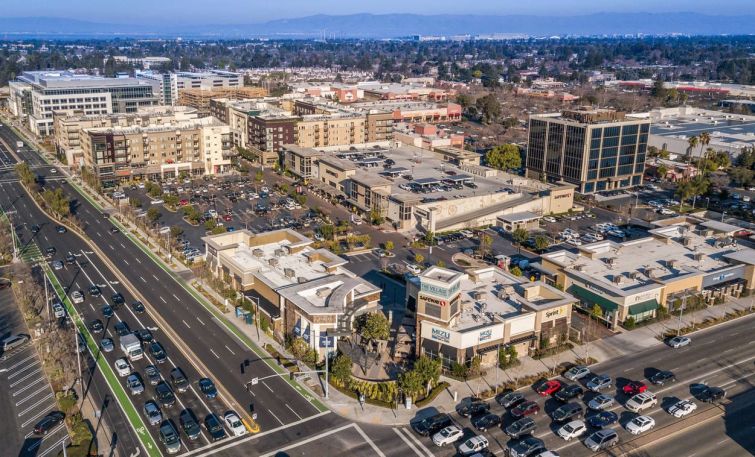 Goldman Sachs, Société Générale and Credit Suisse have come together to originate $505.6 million in debt for Brookfield Property Partners’ acquisition of Village at San Antonio Center, a mixed-use office development in Mountain View, Calif., that is almost entirely occupied by WeWork, according to analysis from Fitch Ratings.

The commercial mortgage-backed securities (CMBS) loan, along with about $139.2 million in equity from Brookfield, facilitated the $630 million purchase of the property, per Fitch. It also paid $8 million in closing costs, and funded landlord obligations and gap rents totaling $3.4 million and $1.4 million, respectively.

The loan has a two-year initial term — which is interest-only — and includes three one-year optional renewals. Goldman contributed $303 million, while Credit Suisse — through subsidiary Column Financial — and Société Générale provided $101 million each. The mortgage is secured by Brookfield’s fee simple and leasehold interests in the deal’s collateral, which spans nearly 577,000 square feet across five properties. It is in line to be securitized in the VASA Trust 2021-VASA single-asset, single-borrower CMBS deal.

Built in 2017, the Village at San Antonio Center sports a collection of office, retail and hospitality real estate at 645 San Antonio Road in Mountain View. The collateral in this financing includes fee-simple interests in four properties and the leasehold interest in the retail portion of a fifth building, totaling just over 576,900 square feet.

The collateral’s 457,000 square feet of office space is 100 percent leased out to WeWork, who has subleased the space to Facebook, which has signed for it through 2034. WeWork’s enterprise lease is fully guaranteed by Microsoft through July 2029, which is three years after the scheduled expiration of the loan’s term. WeWork’s lease represents about 79.2 percent of net rentable area, or nearly 93 percent of Fitch’s analyzed base rents.

Facebook isn’t really using the space right now due to its work-from-home protocols, but despite that fact, WeWork remains current on its rent payments, according to Fitch.

The complex is roughly 90 percent leased out to four tenants. Along with the WeWork, Facebook and Microsoft consortium that holds the office space, Showplace ICON Theater runs the 10-screen movie theater, and First Republic Bank is housed in just over 7,400 square feet of ground-floor retail space in one of the office buildings. Fitch wrote that the rest of the retail space at the site is in “shell condition.”

The lone leasehold interest is on a nearly 13,000-square-foot retail box at the ground level of a Hyatt Centric Mountain View hotel that’s situated on the site; the hotel is not included as collateral in the financing.

The Village at San Antonio Center is a 15-acre, master-planned site built by Merlone Geier Partners that includes the collateral in this financing as well as the Hyatt Centric, The Village Shops — a 90,000-square-foot retail center anchored by Safeway — and The Village Residences, an apartment building owned by Brookfield that has 330 units. Neither of these supplemental developments serve as collateral in this CMBS deal.