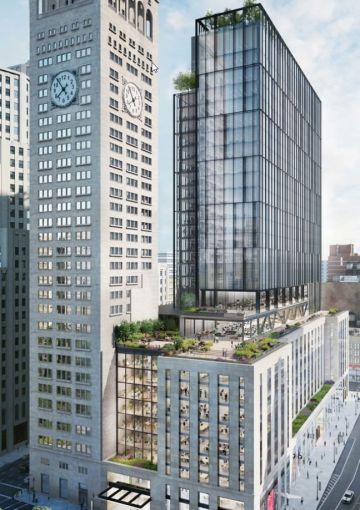 The southern side of East 23rd Street between Broadway and Park Avenue has seen an uptick in food tenant leases over the last few months, as retailers stakeout spots for both the locals and in anticipation of SL Green Realty Corp.’s redevelopment of the office building at 1 Madison Avenue.

One of the newest leases is for a co-branded Dippin’ Dots and Doc Popcorn at 24 East 23rd Street, across from Madison Square Park.

This is the sweet treats chain’s first location in New York City and will be a flagship. The tiny store of just 376 square feet at base of the luxury, high-rise condominium known as One Madison. The asking rent was $400 per foot.

The franchisee, Neil Hershman, a financial analyst, aviation enthusiast and triathlete, also recently signed a lease in Times Square at 732 Seventh Avenue for a flagship for his other franchise, frozen yogurt company 16 Handles. When it has its soft opening in March, it will be its fifth location in the city. Another four uptown are owned by another franchisee.

“I always loved dessert, but in my wildest dreams, I never thought I would be in the business,” Hershman said. He is currently prepping for a Mt. Everest climb, which will take place right after the two flagships open, he said.

“Hershman is becoming a local dessert entrepreneur and is now betting on the city in a big way,” Franco noted.

At the base of the Flatiron District building, One Madison is also home to a Sticky’s Finger Joint barbecue spot and a McDonald’s. Most recently, Popeye’s leased the former Flats Fix restaurant a few doors west at 14 East 23rd Street.

Brokers say another food joint is likely to take the former Blue Dog Kitchen at 112 East 23rd Street. That building is represented by Chris Salizzoni of Capital Real Estate Advisors, who declined to discuss any possible deal as did the owner.

Next door, at 40 East 23rd Street, Zucker’s Bagels & Smoked Fish is open for takeout and delivery.

“23rd Street has historically been a fast-casual New Yorker block,” said Franco. “As dead as people think New York is, there is activity.”

Eataly NYC Flatiron‘s food court and grocery holds down the west side of the park at 200 Fifth Avenue. The Eleven Madison Park restaurant, which now has dinners for pick-up, is located on the east side of Madison Square Park, as is The Clocktower inside the New York EDITION hotel, which serves a $40 prix fixe weekday lunch.

While Schnipper’s in the base of 1 Madison Avenue is shuttered for good and the building is under construction, its developer, SL Green, is known for adding fab food outlets to its properties. When the building opens at the end of 2023, SL Green says it will include a 15,000-square-foot artisanal food market.

While 2023 seems like a long time off, Newmark broker Jason Pruger describes the area as, “A great combination of residential, office and hotel, which is always lively.” Pointing to Madison Square Park, he said, “Remember, that’s where Shake Shack started its empire. It’s always been a good food area.”